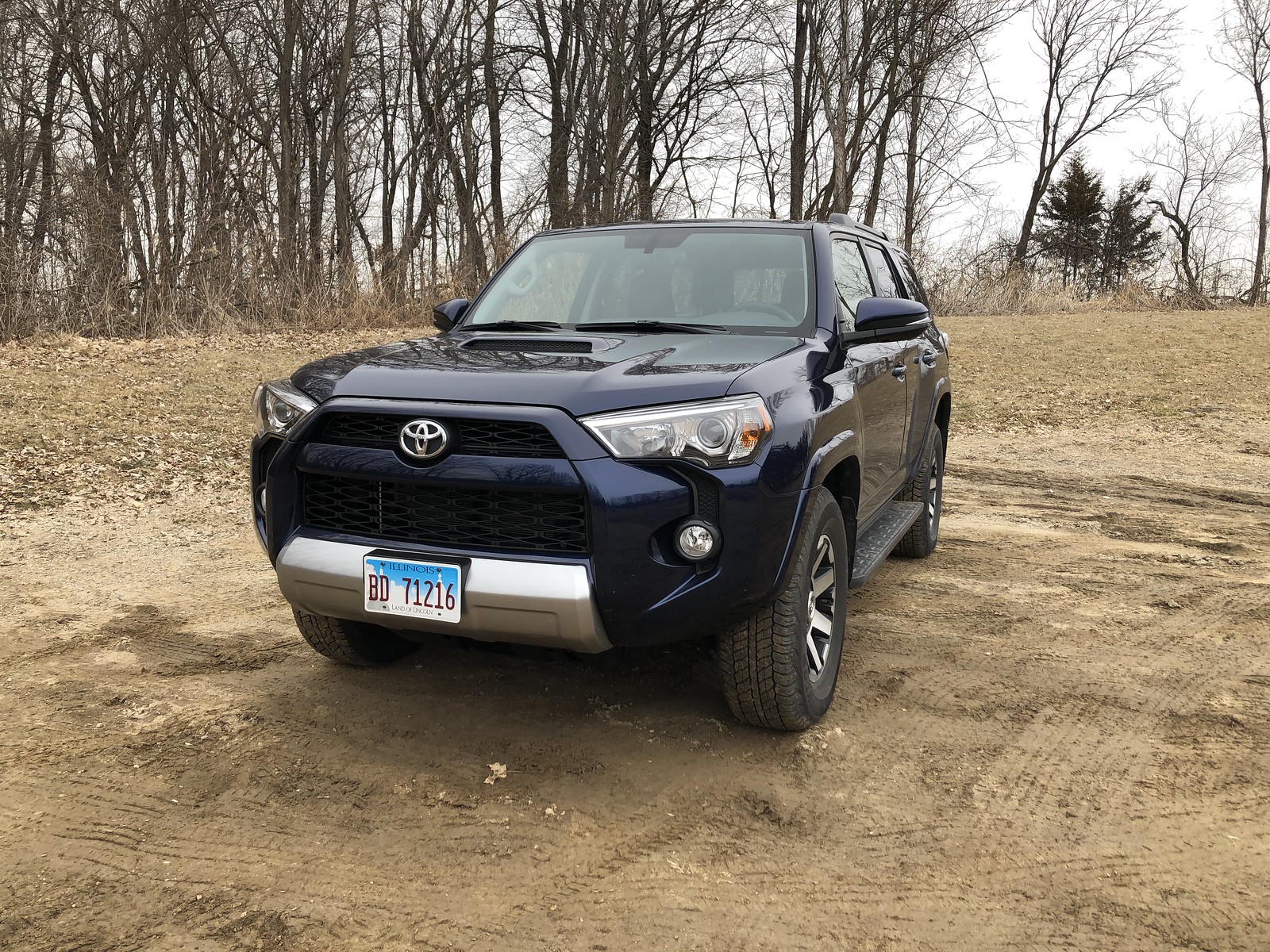 Let’s state some facts, shall we?

First off, 4Runner sales are on the rise. The first quarter of 2019 saw a 4.1-percent increase in deliveries over the same period in 2018. It is the sixth best-selling vehicle in the Toyota lineup – one of seven that are selling over 10,000 units per month.

Then, there’s the reports and accolades pointing to the longevity of 4Runners out on the road. Between Autoweek, iSeeCars, and other outlets, their reports put the 4Runner among the Top 10 or Best In Class in terms of dependability and durability.

Lastly, we keep on forgetting that the 4Runner is built as a body-on-frame SUV. According to enthusiasts, that is considered a proper SUV. Therefore, we see 4Runners going into off-road trails and overlanding everywhere across North America.

Over the past three-plus decades, the Toyota 4Runner is a part of a legacy that began with the first Land Cruisers in the 1950s. A legacy of toughness that continues to engage owners and enthusiasts alike to its charms.

Until recently – OK, 2014 – I thought that the 4Runner was out of step with the reality of the proliferation of the SUV. That was when I drove one. That was also about the time I began to befriend those who have either owned one or were about to get their first 4Runner.

This story actually begins the following February. The first Polar Run began in a parking lot in Stillwater, Minnesota. That was when I met Samuel Coler and his 4Runner Limited. Little did I know that one of the reasons why Coler bought his white 4Runner Limited was because of his position as a sales consultant at Walser Toyota in Bloomington, Minnesota.

"My affinity for the 4Runner really started when I found out that the 4Runner tops the list of the vehicles that depreciate the least over their course of ownership,“ Coler explains. “The most opulent looking combo, in my opinion, was Limited 4Runner in Blizzard Pearl with Redwood brown.  I placed my order in September at some point and October 8th, 2014 my 4Runner rolled off the assembly line in Tahara, Aichi, Japan. It boarded a ship, to a train, to a truck in one month and was at my Dealership. It had 1 mile on the odometer."

That 4Runner Limited was Coler’s "signature" when I met him and his team at that first Polar Run. It was that right combination in a capable vehicle he was looking for. "I love that this vehicle can let me feel luxurious with features like heated and cooled perforated leather seats and a kicking 12-speaker JBL sound system," said Coler. Plus, "[the 4Runner] can also chase down a side by side ATV through off-road vehicle trails, should I so choose with proper permitting.  Whether on or off road, the miles melt away because the 4Runner[‘s] ride quality on the body on frame design is forgiving while still maintaining great road feeling, not numb like most SUVs in its segment has come to be."

Coler pointed out that the 4.0-liter V6 that powers this generation of 4Runners was indeed "bulletproof" – a testament to the dependability and durability of this SUV. He continues to state that "[t]here is a lot of beauty in its simplicity. It's part-time 4WD system (full time on the Limited) has also been utilized for the last 10-plus years and while simple in its actuation, is excellent in getting power to the wheels. Same can be said about interior trimmings. You are not going to find things like lane departure alerts yelling at you and blind spot monitoring not offered, mainly because the people that are looking at a 4Runner want to drive the vehicle on and off the road."

"The 4Runner opened my eyes to the immense value and durability that Toyota trucks have," Coler further explains. "I owned my 4Runner for nearly 18 months, before my wife and I realized we were using it like a pickup, and rarely saw the back seat upright. The decision was made to switch to a Tacoma. I will definitely own another 4Runner in my lifetime. This is a forever kind of love."

At the same inaugural Polar Run was another enthusiast couple in the Twin Cities – Shane Sienko and Katherine Nalepka. Eventually, Sienko would get involved in the Polar Run and would also get his own 4Runner.

Sienko went through a few cool vehicles to get to his 4Runner, even though he grew up around trucks. He came to a point in his life when he had to do something about his want of a 4Runner. Sienko explained after he saw the 2015 TRD Pro I reviewed, he had to get one. “From first sight,” explained Sienko, “I fell in love with the new 5th -Gen platform.  It was like looking into the past with a fresh take on the future, it had hints of the old school 1st-Gen boxiness but with a new flair and appeal.  I still had my Subaru at the time. At that point, my mind was already made.  I went to that year's Auto show and got to play around inside of it a little bit and before I left the auto show I already knew what was going to happen.  Within weeks I had found a white SR5 that I could upgrade and do what I want with for a reasonable price.  I traded in my Subaru and began the process of building an adult's toy that I could use as a daily driver."

"I joined some forums and got to know the aftermarket products and started my upgrades," said Sienko.  "I managed to get an intake from a friend, I purchased protection from a young company at the time called C4 Fabrication. I upgraded lights, rims, tires, shocks and springs all in the hopes of creating the ultimate adult off-roading daily driving toy.  I even decided to take the rear seats out to make a sleeping platform or hauling platform that can serve many different purposes in my ongoing adventures.  I think all of this happened within a year and I put the final touches of an 80's inspired livery kit custom designed by me and installed with some help from friends.  This custom livery, of course, was an ode to the childhood icon Ivan ‘Ironman’ Stewart.  This particular color scheme really popped on a white 4Runner.  With all the other upgrades that I got previously, it achieved quite a bit of attention along with a retro but unique look.   I went from not knowing what Instagram was to having 3000 followers within a short period of time just because of the truck."

"Of course, all those upgrades were not for show," continues Sienko. "I have continually driven this truck very hard and took it on quite a few adventures doing slight adjustments and upgrades as I go.  I've done all my own servicing on this truck except for anything that requires a lift.  This truck has over 100,000 miles on it today and is going up every step of the pedal.  My truck has scratches, dings, dents and overall shows the amount of use that I've put it through.   This Toyota is not babied.  As I'm growing older with this Toyota 4Runner, I also have gained a respect for the quality and engineering that goes in making a vehicle like this.  It's one of the only body-on-frame platforms left."

Although Coler traded in his 4Runner, Sienko has no intentions on doing the same thing. After all, he added more context to his paean to 1980s Toyota off-road prowess. And, yet there is a charm for Sienko's "burrito." "[T]his particular generation 4Runner can pretty much do anything you intended to do," Sienko explains.  "It can be a daily driver or a daily commuter that you can feel safe in or you can find the most gnarly off-road adventures possible and get through it with or without any particular help.   it's 'A-Track' system is fairly amazing and surprised a few Jeep folks that have full lockers.  Its relative small stature let it be nimble in the tightest of areas."

Sienko concludes: "this is by far the best all-around vehicle I have ever experienced and I will continue to enjoy its MacGyver-like presence in my life for as many miles as it will give me."

Between both of my friends and fellow enthusiasts, it occurred to me that I felt the same way whenever I work with a 4Runner for editorial purposes. I had my fourth one – a 2019 TRD Off Road – and it not only affirmed everything both of my friends said about their 4Runners, but it also provided a smile on my face every time I drove it somewhere.

Then again, my position gives me a vantage point where I have to evaluate on several levels each vehicle – including SUVs. I can look at a Jeep and either embrace what it stands for or dismiss it for being simply too much SUV for what it’s worth. This is why I champion the 4Runner above all – the design is a self-contained vehicle riding on a strong frame made for doing everything you ask it to.

Sure, it's not the fastest vehicle on the planet. Nor is it civilized to run through the city. Still, everywhere I turn, someone’s got a 4Runner. It may not be used as intended, but someone had the gumption to own one – even in places where parking is an absolute premium.

Aside from Coler and Sienko, other Polar Run participants and other related enthusiasts have owned a 4Runner. They share the same feedback and love for this loveable lumbering ox. Part-winter warrior, part-McGyver, part-smile inducing vehicle.

In the past five years, I received enough love and hate for the Toyota 4Runner. After four testers, I am in the "love" column. For someone who did not grow up on trucks and SUVs, it seemed illogical to embrace one decades on in my life. However, it is logical given these times where the SUV reign the bottom line at any given automaker.

How can you not love the Toyota 4Runner? It is dependable, reliable, strong, capable, and has been the backbone of a winter rally over the past five years. It also has it loyal owners who have embraced this vehicle as more than just mere transportation – unlike other SUV owners. Not just Coler and Sienko, but you, too!