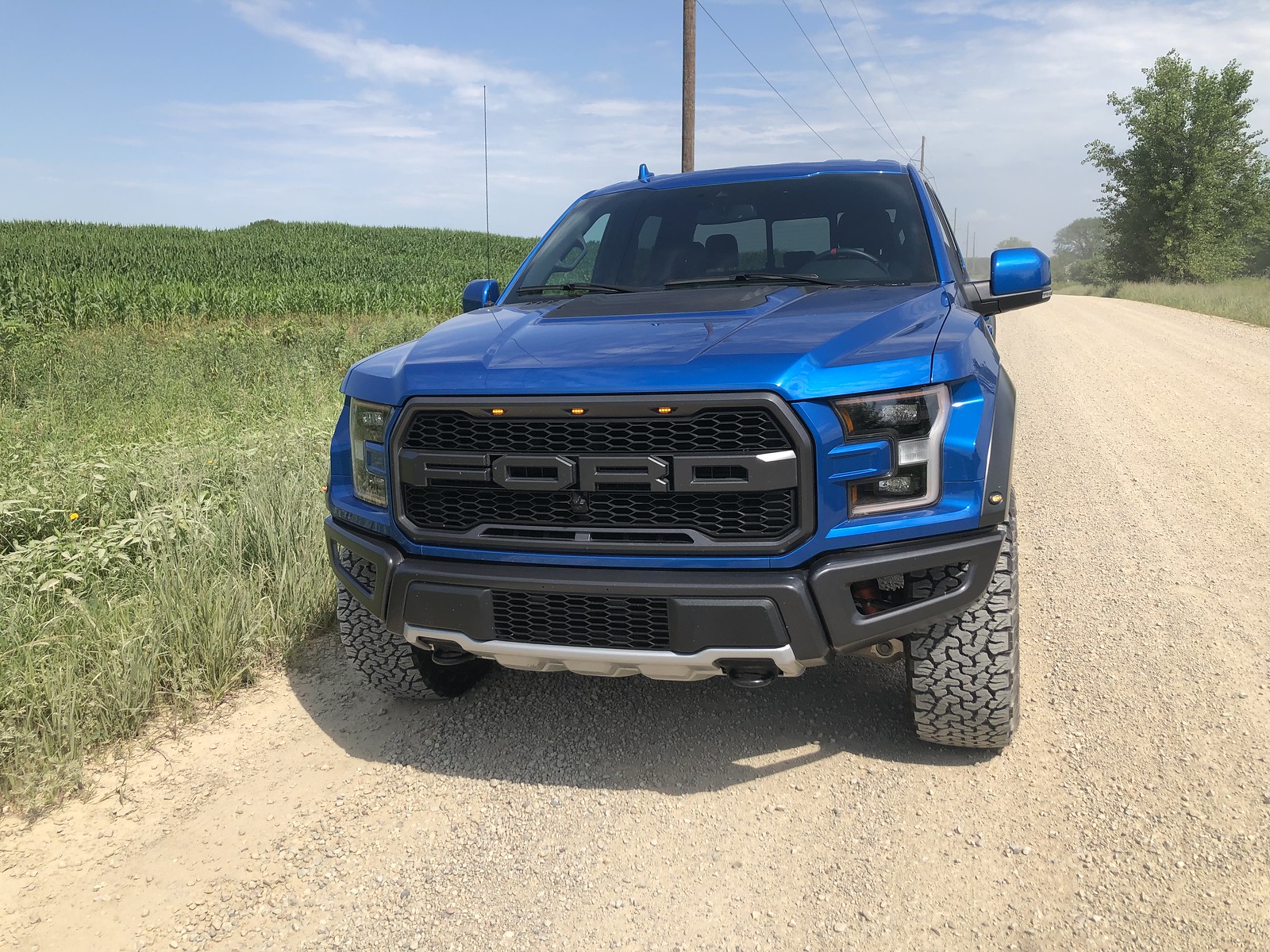 A couple of years ago, I had my first turn at the Ford F-150 Raptor. I likened the desert-running off-road icon to having an age reversal when one tries to drive one. The "Benjamin Button" factor immediately send us back to being a child again when you see a patch of land and want to send this 450-horsepower beast to destroy it further. I don't know – being child-like or childish. You pick which one you want to be when you drive a Raptor.

A couple of years ago, I had my first turn at the Ford F-150 Raptor. I likened the desert-running off-road icon to having an age reversal when one tries to drive one. The "Benjamin Button" factor immediately send us back to being a child again when you see a patch of land and want to send this 450-horsepower beast to destroy it further.

I don't know – being child-like or childish. You pick which one you want to be when you drive a Raptor.

Then, I got some inspiration. My colleague and friend Harvey Briggs of  Ride & Drives and WISC-TV – the CBS affiliate in Madison, Wisconsin (plus, a very lengthy resume that puts Mr. Briggs into a league onto his own). On his weekly spot in the late afternoon news broadcast, Briggs showed his WISC-TV colleague, Mark Koehn, what this truck is all about – going fast in the mud and doing a bit of a jump.

The look on Koehn's face when Briggs made his jump was priceless.

So, I was inspired to revisit the Ford F-150 Raptor. This time, a 2019 SuperCrew in Velocity Blue.

Before we talk about why I brought back the Ford F-150 Raptor, I wanted to address something about vehicular worship, automotive enthusiasm, and social media. As a practice to engage with friends and others, I would post photos of the vehicle I am working with on my Facebook and Instagram feeds. When the Raptor first arrived two years ago, I received a lot of unwanted attention and some very interesting comments. As much as I want to keep these press feet vehicles close to the vest, I had to acquiesce to the whims of my friends, followers, readers, and others to expose the gray SuperCab Raptor in the flesh.

The original plan was to take the Raptor to Minnesota Cars and Coffee that Saturday. That did not happen. Not because of some damage to the Raptor (which there was none), but, rather, some other form of injury (not physically, mind you). It got to the point where the vehicle was simply overexposed to the fanboys and others who would rather hump it than appreciate it.

Lesson learned. At least I should give this another try.

Why bring back the F-150 Raptor? For starters, there had been some updates made to the baddest pickup truck ever created for 2019. The Terrain Management System now has Trail Control, a form of cruise control made for off-road conditions. Ford also reworked the Fox Live Value shocks for an improved ride on tougher terrain, including protection against situations where the Raptor could bottom out. Available Recaro seats are also new with improved bolstering and a sport-focused look.

These improvements help make the Raptor more desirable. But, there is more to this pickup truck than just its aggressive stance, 17-inch BF Goodrich KO2 tires, and bad-to-the-bone demeanor.

Think about what you have read, seen, or heard about the F-150 Raptor. It is that hot vehicle that is a prized possession for those who own one. It is the pickup truck equivalent to a Lamborghini or Ferrari – with a completely different purpose, mind you. This truck is what a recreational vehicle should aspire to become – something with extraordinary capabilities made for a higher level of "fun."

One does not drive a Raptor to a job site with a box full of 2×4 studs and plywood. You can, but, cmon! Nor does one tow an Airstream behind it for some glamping in the woods near the source of the Mississippi River. Again, you can, but always check the maximum tow ratings before you do so.

If you have to ask, you can only tow a maximum of 8,000 pounds with the Raptor.

Pulling that weight is the aforementioned 450-horsepower 3.5-liter EcoBoost V6. The High Output version of the big EcoBoost also puts out 510 pound-feet of torque. This mass of power is channeled through a 10-speed automatic transmission sending power through a two-speed automatic four-wheel-drive system. All of this feels effortless, but that bravura from the exhaust system begs you to send all of this onto the open country.

The flip side of this motor is its fuel economy. While 17.1 MPG is expected, if not respectable for a high-performance trophy truck, some may argue that they would be better off with a regular F-150 with a lower-priced trim and the FX4 off-road(ish) package. If you are watching your nickels these days, here is another consideration: Ford Performance asks that you put 93 octane Premium in the fuel tank of the Raptor. Most likely, you will find this higher level of fuel at BP and Shell gas stations. If you just fuel up with 91 octane Premium, you might feel some loss in performance. That will depend on the quality of 91 octane gasoline.

When equipping your Raptor, it should be absolutely fine to tick off all of the boxes on the order sheet. My tester has practically all of the cool things from the F-150 catalog. The new Recaro seats are supportive and comfortable. The quality of the interior is great, along with the details one finds on a Raptor. The blue stitching is a nice touch, contrasting with the red Ford Performance stripe at the top of the steering wheel.

There had been some great feedback on the instrument cluster and its wide TFT information screen. The eyesight area enables one to get the information they need and keep their eyes on the road (and their phone tucked away from public safety agencies).

Then, there’s the tech one finds on a Raptor. Adjusting the feel of the steering system is through only one button. You can choose between Normal, Comfort, and Sport. Then, there’s the Terrain Management System. Select the terrain you want to take it on –

All of this great – and, yes, I love the F-150 Raptor. However, it is designed to go off-road and wants to play in the dirt, sand, and gravel when it wants to. However, the reality of any such vehicle – Jeep Wrangler owners will know this all too well – is that a huge majority of Raptors never find themselves on a surface other than a paved one.

However, the Raptor does fine on city streets and highways. The soft suspension absorbs very well, but do not expect racecar handling in the corners. A little care goes a long way in the Raptor. The brakes are better in the Raptor than on some regular F-150s. I like the pedal feel and the quick response down at the wheels. Parking one can be a task if no one is used to an 86-inch wide truck.

It is worth repeating that anyone with an F-150 Raptor should take their hot and precious truck somewhere on dirt, mud, or gravel – or a combination of all of the above – and drive this as engineered, designed, and intended.

I noticed a couple of things when trying to find a place to take the Raptor to do some off-roading. One was its width. Ford added 2.8 inches to the standard width of the F-150 for the extended fenders of the Raptor. Compared to a Jeep Wrangler, that is a 12.5-inch disadvantage when trying to follow one onto one of Minnesota’s (and Wisconsin’s) official off-road trails (that actually allow Jeep Wranglers onto them). These trails cut through some densely wooded areas where trees take more precedence over SUVs and trucks. It might not fit on those tight areas where a Wrangler would have fewer problems.

Then, there’s the issue of its overall length. Because the state’s official off-road trails being very technical at spots, negotiating 231.9 inches of truck – along with its 146-inch wheelbase – may be too much for the Raptor to do.

That does not mean you can find your own fun in a Raptor in more open country. One would think a desert or a dry lakebed. In the Upper Midwest, that means farmland.

With all due respect to the hard-working farmers of the Upper Midwest, I did not trespass your property and play on your precious plots or the tracks around them. You…I meant, we…need them to sustain our economy for the next harvest. Instead, I traversed the network of gravel roads that frame your property.

You see a lot of vehicles drive on these roads, including pickup trucks that fly down there at higher than the posted speed limit. In these parts of Minnesota, it is an absolute necessity. Being respectful of residents, farmers, and the impending harvest, the Raptor took these roads in 4A – four-wheel-drive Automatic mode – with ease. The BFGoodrich KO2 tires bit down on the gravel and the Raptor got a bit dusty with glee. Smiles were widened.

The sad part of doing this is that I wished I had more off-road experience and training. And, places to truly test the limits of the F-150 Raptor. Nonetheless

There is a price for having fun in what has been described as a “trophy truck sold to consumers.” The 2019 F-150 Raptor is priced form $52,855 for the SuperCab version with just the standard equipment – an extensive list to get this truck up to spec. Once you tick the box for the SuperCrew version, that price jumps up almost another $3,000. The pickup truck featured in this review had practically every box ticked on the order sheet. The sticker price for this tester came to $74,955.

The price scares you, I know. However, the level of content on this tester can be pared down for a more concentrated version for you. Do you need the graphics package? Do you want the Recaro seats? Can you live without the driver assistance features? Do you care about having a spray-in bedliner?

From my own perspective, the answer is simple: I want all this stuff on my truck. It makes the job of going off-road much easier to live with.

I also heard this argument: "I can get any F-150 with the FX4 Off Road package for much less than this Raptor!" Ah, but can you get one with a tire package similar to the Raptor's BFGoodrich KO2s and skid plates at a more reasonable price? You can, if either the dealer sources and installs those upgrades or go through an aftermarket channel. Oh, and you might have to have them do suspension modifications, too.

The main thing about the F-150 Raptor is you can get the maximum amount of enjoyment from a pickup truck that is ready to run right from the factory floor. Getting the SuperCrew is quite a jump in size over the SuperCab version, but the ride quality is much better and has the right look and presence to pose before immediately attacking your chosen terrain.

This second time around was a much more enjoyable experience. And, I believe I found a pickup truck that I would love to have as my own. Granted, it could be considered a bit much with its wider stance, huge BFGoodrich KO2 tires, and other goodies that make the F-150 Raptor the baddest pickup truck in its class. That’s just it – it is simply the baddest full-sized half-ton pickup truck around. And, I love this damn thing!

Things are better the second time around. This statement is true for the Ford F-150 Raptor.