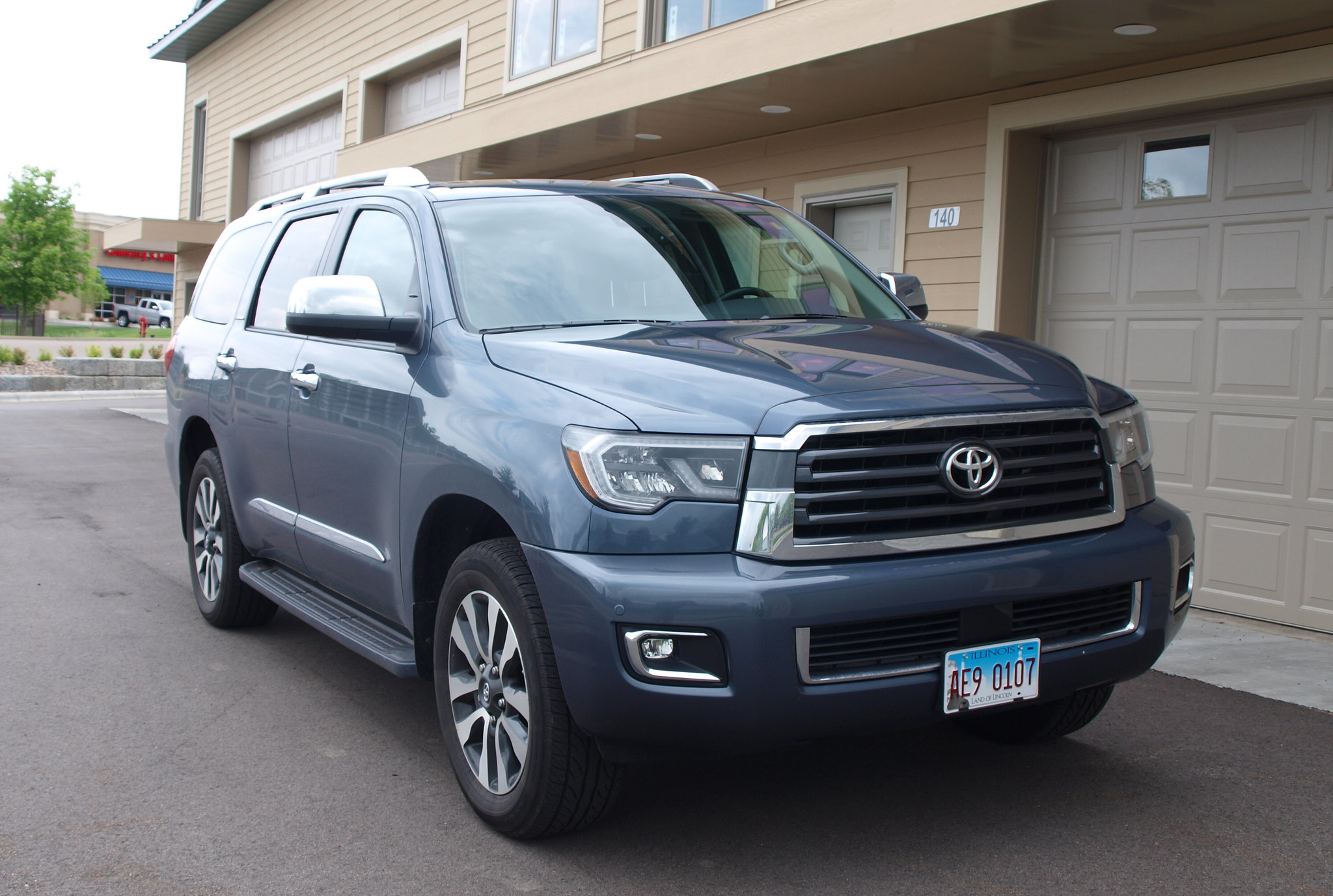 A Victory & Reseda review of the 2018 Toyota Sequoia

It is a fact that I have worked with every model in Toyota's current lineup – except for one.

If you look back at my work over the past seven years through all of my outlets, you can say that I missed out on three such models. One is the FJ Cruiser, which is one of the most capable SUVs Toyota created not based on the Land Cruiser. It is derived from the same platform as its global Hilux pickup truck, which is a proven and tough basis to build an equally tough SUV. Sadly, the FJ left our market because we wanted softer SUVs rather than ones that would get us through the Rubicon Trail.

The second is the Venza. The Camry-based crossover was more of a curiosity than a competitive product. It came when it was fashionable to make such things. However, Toyota learned that its customers wanted an SUV rather than just a tall wagon based off of their most popular car. The Venza was simply canceled.

The third one is still with us. It is Toyota's largest SUV – made right here in the USA. In fact, it is in its second iteration – one that had been with us since the 2008 model year. That’s eleven model years, for those who are counting.

The 2018 edition of the Toyota Sequoia went through a much needed and overdue update. A few details here and there to make it more competitive against its domestic rivals. It took a while to get one in, but I was happy to see the big SUV arrive for a week's worth of work.

Here is another fact: Toyota sells two "big" SUVs in this country. Other than the Sequoia, there is the global juggernaut called the Land Cruiser.

Why sell two "big" SUVs under one roof? Good question. Clearly, one was developed with a planet in mind, though the one we get is the top of the line 200 Amazon model that has been seen as deviating from the Land Cruiser’s continual mission. The Sequoia is simply for us – American families looking for an alternative from the domestic offerings in the same class.

There are two glaring differences between these two big SUVs. First, is the price. The Land Cruiser starts at $84,315, where the Sequoia is priced much less than that. In turn, the Sequoia sells at a rate of 3.53 units to one Land Cruiser – that for the calendar year, so far.

The Sequoia fits in with the shorter wheelbase versions of its domestic rivals – the Ford Expedition and Chevrolet Tahoe. It also matches up with the Nissan Armada, which is developed from a global SUV called the Patrol. The Toyota is neither the lightest, the most powerful, or the least expensive of this group. However, it does hold it own based on what it can do for its owners and occupants.

It is derived from the Tundra pickup truck – similar to how Ford and General Motors developed their big SUVs. A fully boxed frame serves as the foundation for a body that is seamless and well-designed for its intended purpose. The body is solidly formed onto the frame, which makes for an assured feel when you step into the Sequoia’s cabin.

Instead of straight lines and angles, the Sequoia stays true to its Tundra roots with curves throughout the body. You may notice that the front end appears to be shorter than its rivals, allowing for a larger cabin and a longer area behind the rear doors. It retains its "big rig" influenced front end with a tall snout, flanked by new LED framed headlamp units. Grille textures are softer than any Sequoia before it.

The rear liftgate features a power window that can be opened for fresh air or cargo loading. The side doors also open big and wide, especially for third-row access from the rear doors.

One thing must be said about the interior of the Toyota Sequoia. Among similarly-sized vehicles – short-wheelbase large SUVs – it has that largest cargo space of them all: 120.1 cubic feet from the liftgate to the back of the first row of seats. It still has the most cargo space to the back of the second row of seats – 66.6 cubic feet. Meanwhile, it can seat up to eight humans. Perhaps having a short front end and a large cabin area is a plus in this class.

Everything is sized generously. The front seats are huge – big thrones behind the windshield. They are also comfortable, providing a relaxed feel behind the wheel. It does come with a power rake, height, recline, thigh, and lumbar adjustments for the driver. Up front is a wide center console featuring two big cupholders, Toyota’s gated gear lever, and a huge armrest compartment. All three rear seats are adjustable for rake and recline – including the center seat.

Normally, a large SUV with a shorter wheelbase would yield a tight third-row seating area. Actually, the third row in the Sequoia is more than adequate for young adults – and average-sized people. Access is fine with a simple flip of a lever on top of the second row. You can also fold the second row down with another lever on the side of each outboard seat. Third-row seats can be lowered and raised by a couple of switches by the liftgate.

The driver has a large instrument panel to work with. The binnacle offers comprehensive information through two larger dials, four key gauges and a center TFT screen, all within viewing of the steering wheel. The steering wheel itself is from the Tundra, which is large in diameter and offers enough controls within reach, along with the cruise control stalk on the right behind the wheel. Controls are sizeable and logical, as expected in a Toyota SUV or truck.

JBL presents 14 Synthesis speakers through my tester's cabin. It is part of a package if you want the ultimate in a Sequoia. It offers solid sound from an Entune-driven 6.1-inch touchscreen head unit. While it is positioned away from the driver, you can still control key functions from the steering wheel. Rear seating occupants are treated to an available Blu-ray disc player for their favorite entertainment played through a 9-inch screen and two wireless headphones. The automatic climate control can be set up in three zones, including one for the second- and third-row seats.

All of this large cabin space and luxury is possible because of what is under the hood. Toyota's i-FORCE 5.7-liter V8 has always been one tough power source that can take the weight and provide the thrust to get you there. With 381 horsepower and 401 pound-feet of torque on tap, the mighty V8 takes this 5,985-pound SUV, its up-to-eight passengers, and up to 7,300 pounds of anything connected to its tow hitch to wherever you want to be without any hesitation.

It is also an old-school SUV, with its six-speed automatic transmission and two-speed four-wheel drive system. While it can act like it has a lot of authority on the road, it is reflected in its fuel consumption. In my care, I averaged only 14.4 MPG.

For a large family conveyance, it is expected that the ride quality is to be good enough to let it just glide without any interruption of its occupants. Toyota made sure to use a double-wishbone suspension design at all four wheels with gas-filled shock absorbers on each corner. The result is a smooth ride that accomplishes the kind of fell to keep its occupants relaxed on long drives. A soft suspension means soft handling, but good enough to enable gentle turns on twisty roads. Anything more aggressive would induce even a slight lean or roll through them. It is also a sharp vehicle to get around hazards, if necessary.

One thing a Sequoia driver would appreciate is its tight turning radius and the quick steering feel. I like the response from the road on turns with a controlled on-center feel. The brakes are also good with solid pedal action and great response. I experienced solid stops in normal and panic situations – probably better than other vehicles that I have driven in its class.

The 2018 Toyota Sequoia lineup starts at $48,600 for a two-wheel drive SR5 model. My Limited four-wheel-drive tester came with a sticker price of $62,900. You also have the choice of the TRD Sport model, which looks badass and offers some TRD enhancements to the Sequoia, and a top-of-the-line Platinum model where the equipment list continues to include available adaptive rear suspension and every possible feature standard.

The one question I was hoping to address was how the Toyota Sequoia would fit in places where large SUVs roam. For example, the area around Lake Minnetonka. I get their loyalty to GM’s large SUVs, with a small number of Fords following along, but I also see some with Sequoias. What families will find is the difference in space in comparison to the Chevrolet Tahoe, GMC Yukon, and Ford Expedition shorter wheelbase models. They will also find that with its space and price point, there is probably no need to get a longer wheelbase Chevrolet, Ford, or GMC. Try one out for size and see what I mean…

And, yet, there were some from the peanut gallery knocking the Sequoia for being old. Shame, really, since it is as good as its competitors in the way it drives and provides comfort to its occupants. Believe me when I say that this update does help the Toyota Sequoia’s cause. Perhaps we will see a new one down the line. But, for now, check it out!