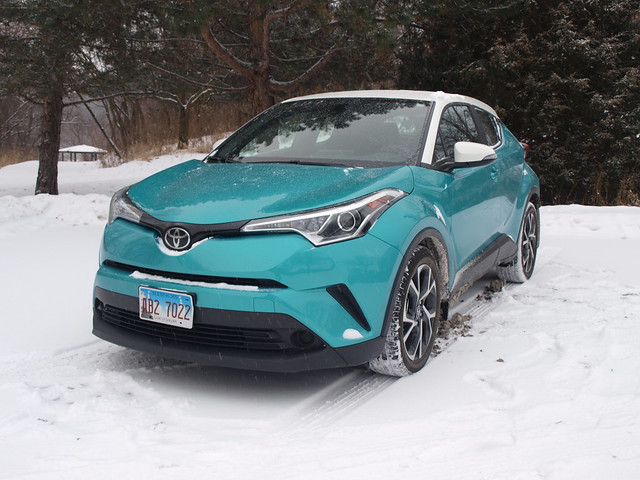 For the few enthusiasts that have championed the brand its youthful outlook and expanding canvas for creative personalization, it is truly missed. Maybe some of the practices might not be fondly remembered, as you can now get more leverage on deals for the former Scion models now sold as Toyotas.

Still, Scion was a brand that wanted to engage with young automotive customers and enthusiasts. In the end, Toyota tried to do that with products that were for enthusiasts (FR-S), post-college graduates (iM), and even younger consumers starting out on their car ownership journey (iA).

One thing that was missing was a crossover/SUV. The market dictated a trajectory where people preferred stepping up into a vehicle, than down. The same young customers looked towards SUVs and crossovers as their salvation, as older customers already exhibited with the segment's fast growth. The solution came in a concept that was small with lots of style. From that concept came a proposed production model – the C-HR.

As the C-HR was nearing production, Toyota pulled the plug on the Scion brand. Though it was to be a global product, North American customers would have enjoyed a Scion made for today's youth living active lifestyles.

Instead, we North Americans are seeing it as a Toyota. In reality, this is a good move, since Toyota needs those same youthful customers to become owners of their wares under their primary brand. The Coupe-High Riding crossover/SUV model now sits in one of the fastest growing sub-segments in the North American automotive market – the subcompact SUV. 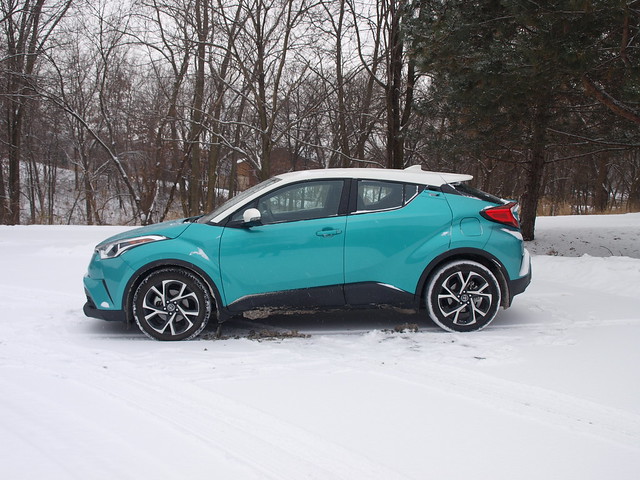 This vehicle actually raises more questions from the get-go. One, does it fit in the Toyota lineup? Two, would it better off being a Scion? Lastly, how is this as a youthful entrant in a fast-growing segment?

For starters, I must address an elephant in the room. Before I even got this C-HR, there was the talk of how much it looked like a certain coupe-like crossover competitor from a certain Japanese rival. Considering my previous experience with said rival product – the Nissan Juke – I must dismiss any coincidental comparison between the two. I was not completely a fan of the Juke. I think there are plenty of things that did not work with it.

The C-HR is different. Its sharper looks and various differentiation in lines, glass areas, and a specific Toyota front end does distinguish it with that other crossover. In fact, it is a sharp looker that can turn heads. While the front end offers continuity with the popular RAV4, the rest is an exercise in design disturbance. Granted, the rear door glass is extremely small, ample mirror areas and a decent rear glass make up for its visibility challenges.

However, a deeper examination fo the C-HR's lines reveal a three-dimensional study on the use of creases, audaciously shaped fenders, and extensive use of protective cladding. Opening the rear door is by a latch up on the C-Pillar. If you have an open mind to design and function, you will love the C-HR.

The key to making a C-HR stand out above the rest if the optional R-Code paint job. If you choose either a green, blue, or a red, you can opt for a white roof. The Radiant Green Mica on my XLE tester is a stunning color, paired with the white roof. If you do not want the R-Code, there are six monochrome paint choices available for you. There is an air of youthfulness with this combination. Big 18-inch alloy wheels finish up the C-HR's concept-to-production styling. 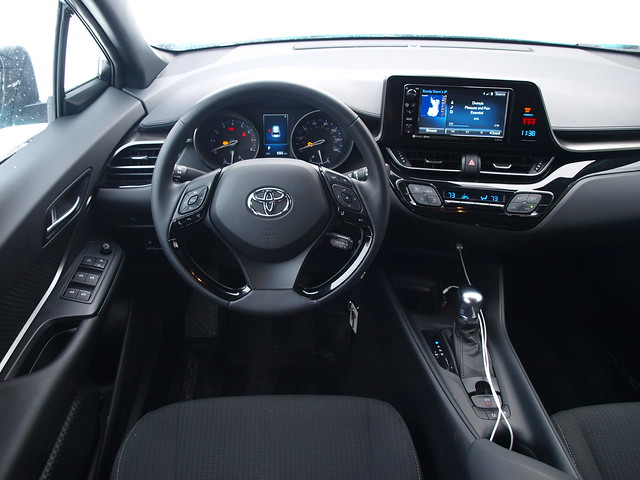 If we must compare the C-HR with…ehem…the Juke, let me say how much I like the Toyota's interior over the Nissan one. It is very straightforward – from the instrumentation to the big center console to the infotainment pod. The cloth seats offer better bolstering, though the flat area of the backrest could be a bit wider. The high back front bucket seats actually offer better head protection than a lot of adjustable headrests. Though I wished it had heated seats up front – especially in the subzero temperatures it experienced during its evaluation period. The heater tried its best to keep things warm from the extreme cold outside.

Rear seat room is a bit tight for larger folks, but four average-sized adults or a young family would fit just fine inside. Cargo space is expansive from 19.0 cubic feet with the rear seats up to 36.4 with those seats down. One complaint, though – I wished the he

A clean instrument cluster has two big dials flanking a color information screen full of data. Some controls seem familiar, but are either hidden below the dashboard's beltline or too small for big fingers to command. There seems to be a lot of space inside the console, but the deep area underneath the center stack only holds a larger cupholder. Climate controls are positioned at just below level and are easy to use. I also like the upgraded level of content, including an electronic parking brake with an automatic feature and Toyota's Safety Sense-P active safety package.

Though it was designated to be a Scion, it did not get a full version of Toyota's Entune audio system. The head unit is the same as in the Corolla iM, which is OK. You do not get SiriusXM, but you do get HD Radio. You can use the Aha app for a more personalized radio experience. The trade-offs for infotainment are easily made up by its six-speaker system with a three-setting equalizer. The Performance setting delivers a powerfully loud sound that is clear and rocking. You can go to the Neutral or Vocal setting for a quieter atmosphere.

And, if you're looking for the backup camera screen on the infotainment screen – look up! It's in the rearview mirror. A bit small, but it works OK. 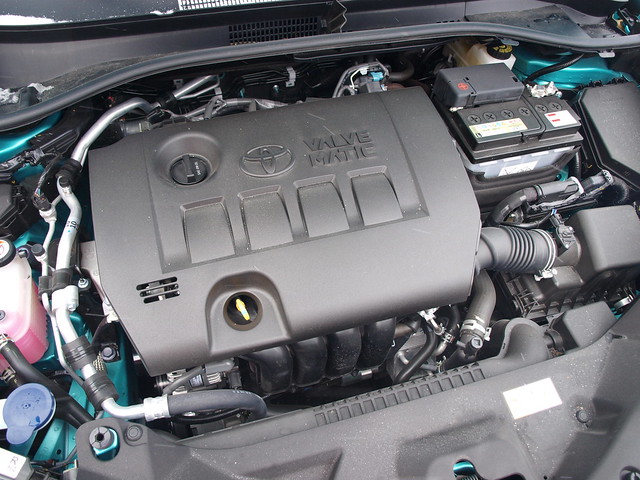 Underneath the hood is a lively 2.0-liter four-cylinder engine. It features the Valvematic technology, which has helped the Corolla's cause tremendously. With 144 horsepower on tap, it fit the mission of the C-HR just right. A Continuously Variable Transmission is connected to this engine, which is actually better than most non-Hybrid CVTs I've experienced from Toyota. Currently, the C-HR is only available with front-wheel drive in the USA.

In terms of fuel economy, I averaged 25.4 MPG – even in subzero temperatures.

The one thing that will surprise you about the C-HR is its ride quality. It is very smooth, thanks to its long wheelbase and suspension travel. That suspension set-up also does a decent job absorbing rougher road surfaces, especially when the extreme cold does its work on making things harder I springs and shocks. Cornering is on the soft side but very controlled to not reveal a lot of roll and lean through the turns. Grip was a challenge with the standard all-season Dunlop tires and front-wheel drive. If you live in the northern climes, invest in some winter tires to improve grip on slippery surfaces.

The steering system is fine and can produce a good turning radius. Wheel response and on-center feel is good. The brakes are superb with excellent pedal response and solid stops in normal and panic situations on dry surfaces. Winter stops are pretty good, even when the ABS system is activated on slippery surfaces.

Pricing for the C-HR XLE starts at $22,500. My example came with a sticker price of $24,318 with the R-Code paint job. You can get a Premium package for the XLE, which adds fog lamps, a push-button ignition, blind spot monitor and rear cross-traffic alert. The upgrade starts at $24,350. 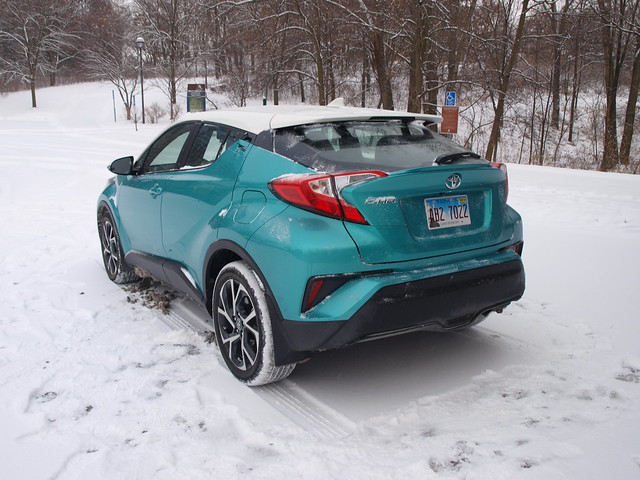 There is a lot to summarize about the Toyota C-HR. It looks different, which will help Toyota's cause. Yet, we should not look at the C-HR as being "different" than simply a "stand out" in its class. Yet, this one's better executed than the Nissan Juke in several ways. Though it would be nice if Toyota would add all-wheel drive to the package. It would still be a value considering the pricing for this model. I have other suggestions, but I already wrote too much.

The one thing I wished for the C-HR is that it would have been sold as a Scion in this country. It would be the right vehicle to fulfill the brand's mission. The company has spoken and this is now a Toyota. Perhaps it will fulfill the same mission as one.