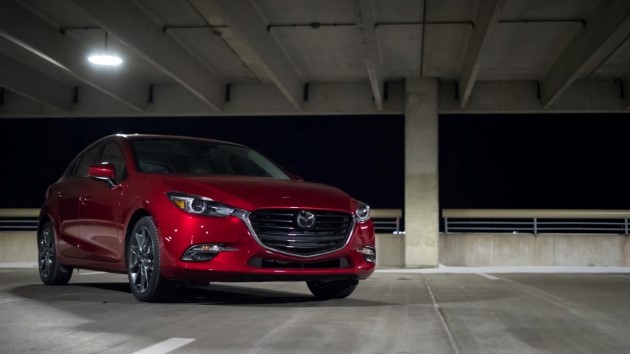 Let us get this one fact out of the way: the Mazda3 is still the enthusiast's choice in compact cars.

That line has been used on the website for years. This goes back to the introduction of the current generation of the Mazda3. The KODO – Soul of Motion styling, Skyactiv engineering, and driver-focused cabin have been hallmarks of a car that satisfies the small and loyal band of owners.

In recent months, its lofty place in the automotive world had been challenged. The two-time #VOTY Finalist Honda Civic had been hammering on the Mazda3 with its wide lineup. This newest generation now includes enthusiast-focused models, such as the Si and Type-R. The Subaru Impreza and Crosstrek showed marked improvement in various places – including an interior that caught the eye of the editors of WardsAuto.

Then, there's the Mark VII Volkswagen Golf. If you include the SportWagen, the Alltrack, the GTI and the Golf R, it is a compact car lineup that should be the envy of the business. The execution is unlike anything in the marketplace – even from its lowest model to the R. Plus, you now have the Hyundai Elantra GT Sport and Kia Forte5 SX are in the hunt to play in the GTI's "hot hatch" sandbox.

While this is great for the compact car segment in the USA, it does have its drawbacks. Customers love choice and want as much as it would cause seismic revolutions inside the brain. Newer products will push some favorites out if the way – that's a given.

However, any discussion of great compact cars should always include the Mazda3. The reasons are simple: No matter what car you pit it against, the Mazda provides its own argument for itself.

If there is a twist to the plot, there is now a push to move Mazda upmarket. What that means for mainstream compact car consumers is that the 3 could be moved into a position where it will compete with the likes of the Audi A3, Mercedes-Benz CLA, BMW 2-Series, the MINI Hardtop and Clubman. It sounds far-fetched, but it is all about execution and perception at this point.

The current Mazda3 sit dab smack in its current segment, yet it does have an air of being something different. Something more enthusiast-focused with some points towards higher ambitions. Then again, how many times have I/we said this?

Let me also establish that this is not the first time I worked with the current generation Mazda3. I reviewed this superb compact in https://www.victoryandreseda.net/2014-mazda-3/ 2014 and in https://www.victoryandreseda.net/2016-mazda-3/ 2016. It did undergo an update for 2017, which saw some nips and tucks in the front and rear ends. Both of these Soul Red Grand Touring 5-door hatchbacks with the larger 2.5-liter Skyactiv engine came with sticker prices over $30,000. For this 2018 Soul Red Grand Touring 5-door hatchback tester, the sticker price actually came down, thanks to model rationalization and creating greater value with expanded content for the money. The sticker price on our tester came to $28,020.

At this point, a traditional vehicle review would not suffice here. You already know the outcome…

It would be unfair to not let this question go unanswered. Thinking about the Mazda3 in terms of the vehicles mentioned beforehand, you have to find the advantages they have on each other. As I drive the 2018 Mazda3 Grand Touring 5-door around my usual test loops – the entire Twin Cities and beyond – I began to start breaking everything down.

One thing I appreciate – and perhaps it's my age – is a transmission with real gears. Not a couple of pulleys and a band of some sort, but a gearbox! Mazda will offer a manual gearbox with a clutch across the entire 3 lineup – a sign they care about the enthusiast. Honda reserves its three-pedal box for its lower models and its higher performance variants on the Civic. Manuals are readily offered on most Volkswagen Golf models, as well as the Hyundai Elantra GT (that's the i30 to the rest of the globe) and on more-than-half of Subaru's Impreza lineup.

For clutch-less drivers, the distinctions become much clearer. Mazda ensures that the 3 is available with a torque converter six-speed automatic on all models as an option. Volkswagen offers a mux of dual-clutch and torque converter automatics, as does Hyundai and Kia. Meanwhile, Subaru and Honda provide a continuously variable transmission on their compact models.

There is nothing like the feeling of working through the gears. Mazda offers two superb transmissions for the driver to work with. It is not how the transmission works, but how they work with the engine and final drive. That is a major difference. On the 3, Mazda simplified the lineup to give the less expensive Sport model the more efficient 155-horsepower 2.0-liter Skyactiv engine, while reserving the larger 2.5-liter, 184-horsepower four-cylinder for the Touring and Grand Touring trims – on both the 4-door and 5-door body styles!

If there is one car that could challenge the Mazda3 for the way it goes about the work of driving – it would be the Volkswagen Golf and GTI. Both suit me fine for the way I like to drive and the way it delivers that particular task. In terms of ride quality, handling, steering response and feel, and braking – the Mazda3 gains even more points in my favor. The Golf/GTI are simply a mere nose behind. I have yet to take on the newest Elantra GT in a review, but a brief drive in one already indicates a challenge ahead for the Mazda3 and Golf/GTI.

The cabin is where a car can hold my attention. If I am driving to the supermarket or down the highway for an appointment, I need to make sure I am comfortable and relaxed behind the wheel. I also need to know if I will be properly entertained and that I get out of the vehicle refreshed and not fatigued. I ask a lot of a vehicle – simply because you do, too.

I have praised the Mazda3 cabin since my first turn in one back in 2014. It has plenty of redeeming and superb details. The Mazda Connect knob and associated buttons augment key functions on the steering wheel making easy work of the infotainment system. The Bose Centerpoint speaker system also fill the cabin with clear and powerful sound. It is an ergonomic wonder – with is center dial and dual aside digital screens.

If we must compare with its competitors, I enjoy the Mazda's difference with other models. Yet, the Golf's cabin is more open, with beefier seats and straightforward instrumentation. The GTI's seats offer more bolstering, along with the MIB II infotainment system offering Apple CarPlay an Android Auto compatibility. The Elantra GT offers a similar tablet-like infotainment pod except for the remote switches on the console found on the Mazda3.

There comes a point where all comparisons must stop. For the Mazda3, that point is called G-Vectoring Control. It is a system where it optimizes “vehicle dynamics control.” The principle is to use the engine to assist in providing improved levels of steering, handling and ride quality. The G-Vectoring Control system works better when road surfaces are not the best. Road surfaces like the ones I subjected this Mazda3 tester to – snowy, icy, and wet roads. Simply, when the road gets rough, the better the system works to improve the driving experience.

In short, this is the secret weapon. And, it works! If I were in another compact car and had just all-season tires, I would feel some slippage and the traction control coming on regularly to correct the loss of grip. Mazda sent the 3 with Dunlop SP Sport 5000 all-season tires. The G-Vectoring Control made sure I did not slip and the traction control was integrated with the system to nominalize loss of grip on these bad surfaces.

One thing I must say: If you live where I live – the Twin Cities – or somewhere similar in a climate where it gets cold, it snows and the roads get icy, get a second set of winter tires. If I got a Mazda3, I would get that second set. It's a reassuring layer of protection against slippery roads and bad drivers.

Oh, and since you actually read these reviews for specific data and impressions, I have to report that my fuel consumption average was 29.7 MPG.

I could compare these cars all day. But, why? For the sake of the consumer, perhaps? Rather to stoke the flames of enthusiasts, fanboys, trolls and other associated "car people?" That is a possibility…

The point to all of this is how the Mazda3 has been looked at and overlooked by compact car buyers – enthusiasts or not. If you have been looking at the Mazda3, consider being an owner and enjoy what this really fun compact car has to offer. If you overlooked this car – you made one hell of a mistake.

Since 2014, I point to the Mazda3 as a benchmark for compact car fun. Not serious fun, as in some of its competitors. But, fun…daily fun…year-round fun…fun while commuting…you get the point.

Of course, if I had to choose one – it will always be the specification I received throughout this generation: the Grand Touring 5-door. You get everything – including active safety technology. You get versatility, practicality, and luxury. Even to those who may not think the world of Mazda – they'll always like this specification.

While we live in a world where crossovers and SUVs are the new normal, it is always refreshing to get behind the wheel of an enthusiast's compact hatch for some spirited commutes and vehicular therapy. This is why I always gravitate back to the Mazda3.

…but, wait, there's a couple more images from /Media…