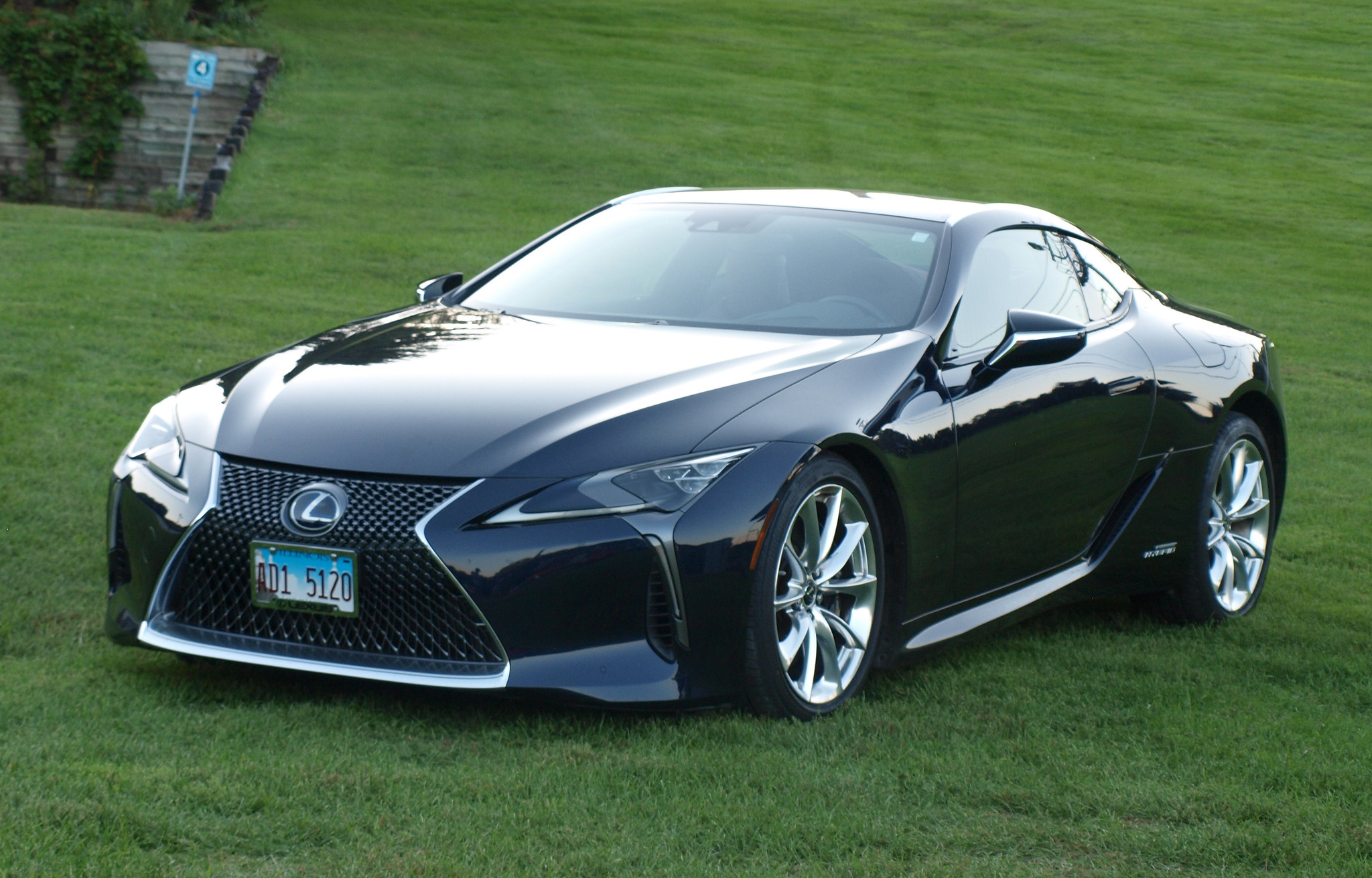 Whenever I get a chance to revisit a vehicle I worked with, I try to get a different perspective out of it. Sometimes, you arrive at the same conclusion as the previous time. Others yield a completely different experience – one worth discussing on here.

The last time I worked with the new Lexus LC grand touring coupe, I gave it a glowing summation as a "crowning achievement for the brand." It was achieved by taking a daring concept car and putting it into production with nominal changes. The result is a car that is in the same conversation with some of the finest coupes available to the most discriminating customers in the world.

The first one was powered by a 471-horsepower 5.0-liter V8, with a 10-speed automatic transmission and a host of tech goodies that have raised the bar for Lexus. The experience was superb by the LC 500 exhibiting true grand touring manners with a heavy breathing V8 propelling it with ease. Yet, it was made for a specific driver – one who wants the drama of performance seeking a superb driving experience.

In my first review of the LC 500, I mentioned that this grand tourer also came in a hybrid version. At the time of publishing the review, I thought that I would just skip the LC 500h and call it good.

That all changed when I was presented to chance to work with the LC 500h. I took the opportunity as sort of a revisiting of the LC itself. Yet, I also was curious how this grand touring coupe would work with a gas-electric drive system instead of a heavy breathing V8.

I should start with how the LC 500h is propelled. As we know, Lexus hybrids are on a parallel system switching between a gasoline engine and an electric motor. Most likely, both power sources meet up with an electronically-controlled continuously variable transmission. On the LC 500h (and on the LS 500h), both power sources are given their own transmissions. The gasoline-fueled 3.5-liter V6 is connected with two electric motors, both are hitched to a 10-speed transmission that is a hybrid onto itself. Lexus calls this their Multi Stage Hybrid.

The Multi Stage part is where the magic happens. There are four stages for which the two distinct powertrains come together. Part of it is a complicated transmission system, for which the 10-speed system is broken down between the planetary continuously variable transmission gearbox with a distinct four-speed automatic gearbox. In one scenario, you can still get an assist from the electric motor, along with gasoline engine, up to 87 MPH. In all four stages, both motors are presently enabling a wider range of performance and efficiency to match driving situations.

Without delving deeper into the language of engineers and the PR staff, let's just say that somehow this Multi Stage Hybrid system works in very interesting ways. Granted, this is not an easy system to understand. It is probably best to simply get inside the LC 500h and drive it to understand. That is what we do anyway, right?

When you get behind the wheel of the LC 500h, do not expect to blast off as you would in the V8-powered version. It is much quieter – don't let the piped in exhaust note fool you. It also provides instant torque to get you on the road and to handle on-ramps and lane changes. Yet, it is not a barn-burner, as with the LC 500 V8, the RC F, or the GS F.

The LC 500h is quite the cruiser. The Multi Stage Hybrid is more delightful to drive than the V8. It is much more relaxed and responsive overall. It does not mean you can have fun in the LC 500h – just that you do not get the dramatics of the V8. And, I am fine with that. In fact, I welcome a car with extraordinary, neck-snapping looks that I can drive without making a scene.

Actually, it has been making its own scene. As I mentioned before, the LC coupe is a neck-snapper. It is a stunning looking car that people are very curious about. In my care, I had more people ask me about it than any car I had in my seven years of evaluating them for publication.

But, it's the Hybrid! Why the Hybrid? Maybe it's the Nightfall Mica exterior paint color with its Rioja Red perforated semi-aniline leather upholstery? Could be? Maybe it's the smaller 20-inch chrome alloy wheels that help make it more luxurious than the 21-inch wheels found on the Infrared V8 tester I had back in May? That also helps visually.

It doesn't seem fair to compare two LC coupes that I have worked with for this website. Let's just call it two different kinds of grand tourers that are the same except for underneath the hood. Perhaps I should concentrate on the LC 500h and talk about it based on its own merits.

This brings me back to the LC 500h as a supreme cruiser. A grand touring coupe is supposed to balance absolute performance with a relaxed feel made for the weekend drive. They are also supposed to be accessible for commuting. The LC Hybrid combines all of this in a package that is undeniably lustworthy.

The concept-to-production transition was nominal, making the LC a design icon on the road. Every line, angle, crease, and curve make sense, while it draws a crowd of snapped necks. The LC has a special air that embodies everything you expect from a grand touring coupe. It never flips the script once.

I had a complaint about the seats in the V8 version. They were extremely supportive on the verge of being hardcore, but my back responded otherwise. The racing-type seats in the RC F/GS F can form around you to make things comfortable, once it understands your body every time you take the wheel. The LC 500h’s seats seem more comfortable with its perforated leather upholstery than the leather/Alcantara mix on the previous V8 tester.

Being taller, I know that a few adjustments would be made for entry and exit into the LC 500/500h. Once inside, I can dial in the seat for a mix of control and comfort – plus to clear the low roofline. And, I love the glass roof panel, for which only some of it is visible, thanks to a sliding cover in the Alcantara headliner.

A lot of this is on repeat from the V8 version, but this time around I truly found that familiarity works in the grand design of the cockpit. An audio control knob sits where the drive mode knob usually is, but I like that it is a knob off of the instrument binnacle housing within reach. The shift-by-wire selector works the same way as the CT 200h (I mentioned this before in the LC 500 review, right?), but I like having some grip to make my selection without throwing it elsewhere.

I also found serendipity in my sight lines to both the instrumentation and the infotainment screen. I also found a greater appreciation for the touchpad controller for the infotainment system over the fiddly mouse-like remote touch system. For everything that I can control inside the LC 500h, I get a greater satisfaction in knowing that I have a coupe I can work with over the miles without any negative feedback.

The trunk works best as a place to put your stuff inside for a weekend trip. Because it says just over five cubic feet of trunk space does not mean you can't utilize it – so, fill it up with groceries, your detailing kit, a 21-inch roller bag with a smaller duffle!

Which brings me to the overall driving experience. To reiterate from above, it is absolutely lovely. Quite the luxury cruiser, as it acts accordingly. The ride quality is superb and the suspension works to absorb roads that are still crewed up due to cracks and shallow ruts. On the highway, it is magnificent. You can drive it for hours without fatigue – and the LC 500h still wants to gobble up more miles in its wake.

Plus, Lexus made a smart decision of giving the LC 500h a set of Bridgestone Turanza tires for the LC 500h on those 20-inch chrome alloy wheels. They truly grip well and assisted in the overall superb ride quality.

Handling is sharp – just like the V8 version. It corners precisely and directly. This is helped by a superb electronic steering system that offers great response from the wheel onto the road. It also answers your command on lane changes and other necessary maneuvers with precision. The on-center feel is also quite good, though a switch to Sport S+ will weight down the steering wheel a bit for more precision.

On hybrids, braking can be quite the chore to modulate – even in panic situations. Not the LC 500h. These brakes act like they are from the V8 version. They offer strong stopping power in normal and panic situations. A huge reason for this is the huge rotors at all four wheels – massive 15.7-inchers up front with six-piston monoblock calipers, 14.1-inchers in the rear. I also love the feel at the pedal.

If there is one huge reason to choose the hybrid over the V8 is fuel consumption. I averaged 30.2 MPG in my care, giving me a range of up to 511 miles on a full tank of premium gasoline. Name any grand touring coupe who can turn such numbers for fuel economy!

Believe me, as I say that the LC 500h is worth every penny. It is not about the price, but the experience of driving in a relaxing machine that can make any drive an enjoyable one.

If you try to ask me to pick which LC I would choose, that would depend on what kind of driving you want to do. For me, I found myself wanting to take it on a drama-free cruise covering miles on end to some random destination. For that purpose, the LC 500h is a perfect grand tourer for that job.

No matter which LC you choose, you are getting a crowning achievement for Lexus. A neck-snapping, conversation-starting halo of a grand touring coupe – that is what the Lexus LC coupe is all about.