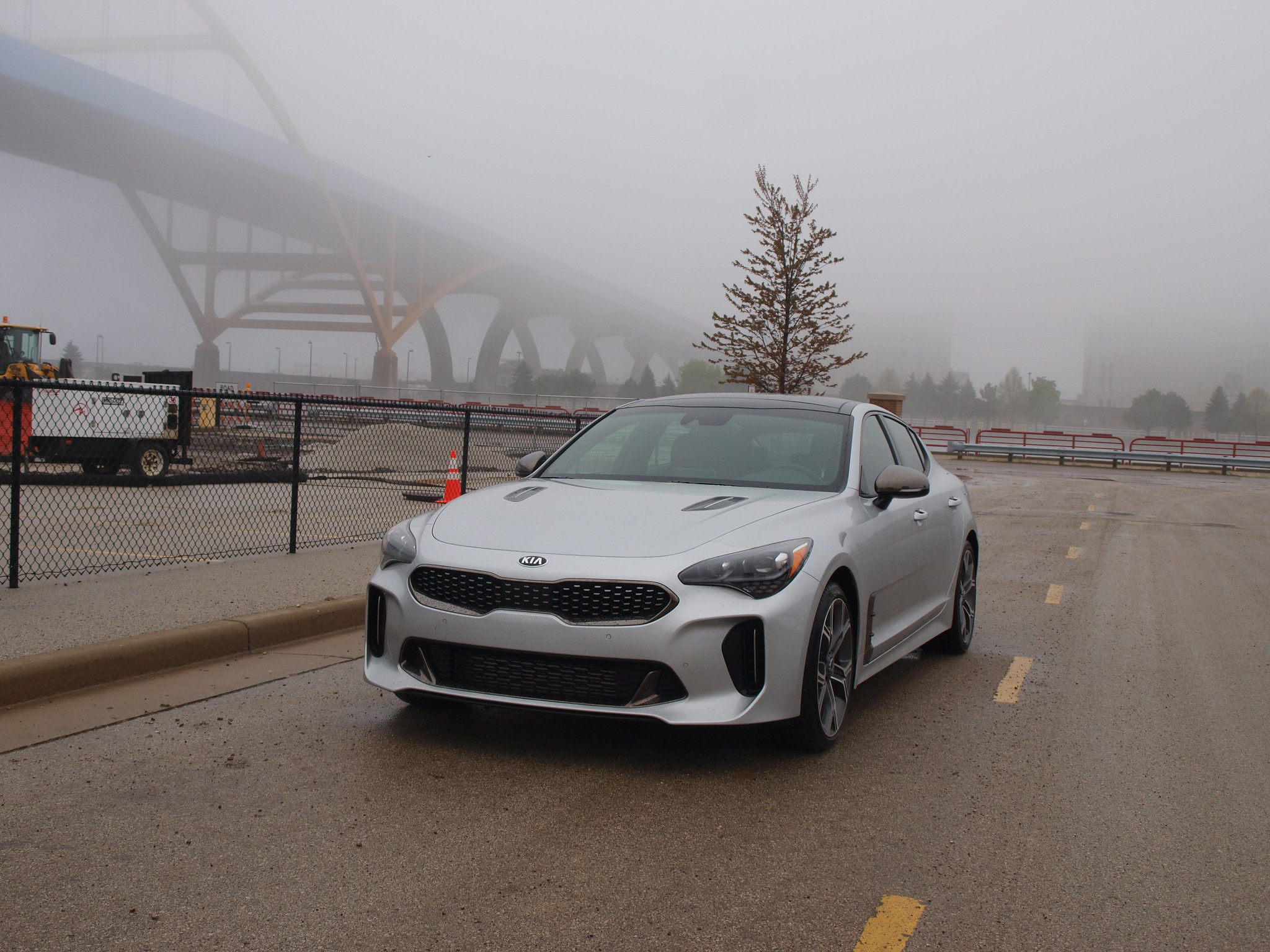 A Victory & Reseda review of the 2018 Kia Stinger

Why are you fixated on badges?

It's like any consumer goods that we obsess ourselves over badges. Think about badges as you would labels. If a label is from a well-known reputable brand that has always offered quality goods for the price, most consumers would buy them sight unseen. But, if we see a label that offers style and luxury at a higher cost, we think it is the absolute best you can get.

Snob appeal is very strong with the automobile. Take for example these newfangled five-door hatchbacks that are becoming the cool new ride in the marketplace. Audi has two of these models, while BMW offers three of them. The RS 7 is a thermal-nuclear beast with a 560-horsepower monster underneath its hood. There is no one as bad as this one.

With 560 horsepower, the Audi RS 7 is as practical as a small station wagon. Well, almost…

When Kia introduced their sleek five-door Stinger to the world, there was a lot of great feedback on the design, the performance, and the technology this car offers. However, there was one minor detail that made a lot of enthusiasts walk away from it – the badge. It is as they were expecting a Rolex or Breitling and was eyeing a Citizen or Seiko instead.

Actually, it's not that simple. Kia has put a lot of effort to create a world-challenging premium sports hatchback. The Stinger is not an off-brand product, but a realized piece of machinery that has everyone talking. To prove it, I received the best Stinger of them all – the GT2 with all-wheel drive.

Let's get into it, shall we?

What makes the GT2 the pick of the range? Underneath the hood is a 3.3-liter twin-turbocharged V6 engine. The numbers are there: 365 horsepower and 376 pound-feet of torque. Though this tester has all-wheel drive, the chassis orientation is for a rear-drive car. This power is channeled through an eight-speed automatic transmission. You can get a Stinger with a 2.0-liter turbocharged four-cylinder motor with 255 horsepower and 260 pound-feet of torque on tap. These numbers are nothing to sneeze at.

Engines and drivelines are just part of the story. You have this sleek design that stands out even among the Kia lineup. It is more distinctive than some of its rivals. This is a car you cannot ignore, even if you are repulsed by the badge.

Another surprise I need to discuss is the space inside of the Stinger. It is driver-focused with the low cowl, lots of instrumentation and information inside the binnacle, and a driver’s cockpit designed for maximum engagement. The head-up display helped ease the information crunch, but the TFT screen inside the binnacle provides a plethora of data a driver would need to ensure the car’s performance and health.

If there is a flaw in the Stinger, it is the shift-by-wire gear lever. If I had a trick to make sure it goes in the direction I need it to, I would let you know. It can be a challenge. I like challenges. I also like things to work with confidence and assurance. The four-cylinder Stingers have a conventional automatic gear lever, BTW.

As I have driven the Stinger GT2 AWD across Wisconsin to (a) see my significant other near Milwaukee and (b) drop it off at the Midwest Automotive Media Association Spring Rally in Elkhart Lake, the seats were just fine. The deep red Nappa Leather seats offer power adjustments for rake, recline, height, seatback bolsters, and lumbar support. I was fine for both long and short stints behind the wheel.

One thing you should appreciate in the Stinger is the hatchback and the cargo space. It is power-operated, which makes life almost easier. It can also swallow plenty behind the rear seats – and with them folded. Over 23 cubic feet may not sound a lot, but if you’re lugging a week-plus of working vacation goodies, it is suitable.

Let's talk about that twin-turbo V6 underneath this Stinger's hood. It is outstanding. This thing is quick, fast, and made a mockery of various traffic patterns it experienced in my care. As I had some high-performance hardware to work with prior to this car’s arrival, the Stinger simply held its own with strong power and great response from the throttle.

Since fuel prices have been scaling up of late, I did manage an average of 22.7 MPG in my care. One thing to note about the V6-powered Stinger is that premium fuel is recommended. It is probably best to put in anything with an 89-octane rating and above with no more than 10 percent ethanol blended in. That’s just my recommendation.

The driving dynamics are also superb. The handling and steering combined offer sharp response and superb control. The brakes felt great at the pedal down to the Brembo calipers and rotors. The ride was firm. It can be made firmer by selecting Sport mode. For the sake of Interstate and two-lane highway driving, I left it in Comfort. Though the ride was stiff, it was heavily controlled by absorbing road imperfections along the way.

It also is aggressive outside! In a good way. Everything points to a sleek look all around, from the long hood, the narrow front end with the "tiger" grille and LED lighting units, the side scoops, the long wheelbase, and the sculptured rear end. The best part of the roofline, which is low, but accommodating. The glass silhouette is classic Kia, with its uptick in the rear door glass. While some may equate this as an Optima – it is far from one. That is what makes the Stinger stand out in a Germanic crowd.

The price for all of this? The sticker on my tester came to $52,300. Stingers start from $31,900 for a four-cylinder, rear-drive version with plenty of stuff standard on it.

As you’re reading this, you probably thinking "this is a Kia?" Yes, it is. A damn good one, too. It was turning heads, pissing off premium car snobs, and making the state of Wisconsin its toy. It also made me feel at ease and in control when it is called for.

BTW, if you want more data and impressions, a more thorough review of the Kia Stinger will appear in the magazine I also write for – in August. I figured you would get a taste of what this car was like in the meantime…

As a side note, I found out that my tester was on the One Lap of America. I was expecting something that was well-worn at under 12,000 miles on the clock. I was wrong. Everything felt sharp and still-new when I received the Stinger. That feeling continued as it worked its way from the Twin Cities to Madison, Milwaukee and onward to Elkhart Lake. There, it should be taking many more laps – around the 4.048-mile track and the much shorter karting course.

But, let us address the elephant in the room – the Kia badge and how it is applied to a car with higher performance aspirations. I see no problem with it, as you should just turn a blind eye to it. The Stinger offers a more focused package than its rivals – the Audi A5 Sportback, BMW 3-Series GT, 4-Series Gran Coupe, and Buick Regal Sportback. The Stinger is uniquely-designed compared to this list – you can pick one out at a car meet or a parking lot.

Yet, we are still fixated on badges and grilles. We would rather drive something like an A5 Sportback or a 4-Series Gran Coupe than a Stinger. If you happen to be one of these people, then you are missing out on a car that is simply a ton of fun, engaging, and downright badass. In a nutshell, this is what Kia accomplished in developing the Stinger.

Besides, the Kia Stinger doesn't need to show you "no stinkin' badges!"