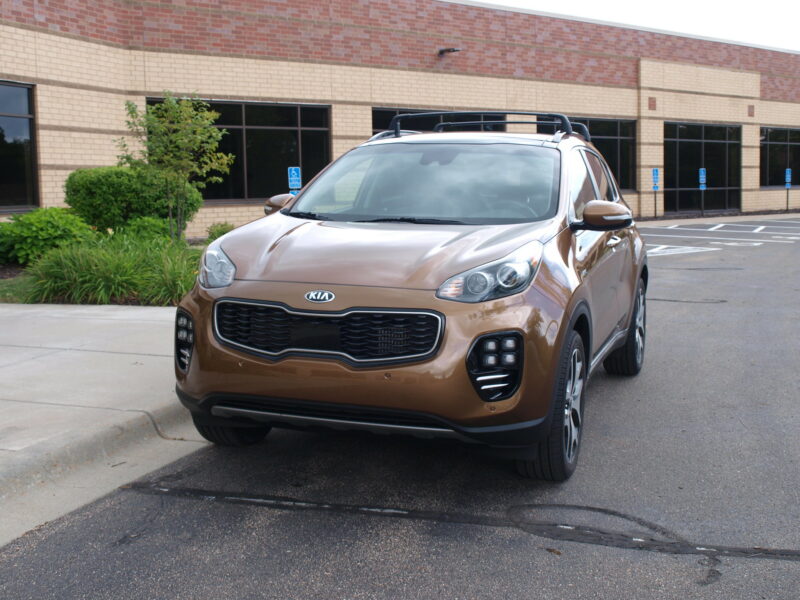 A Victory & Reseda review of the 2018 Kia Sportage

Did you know that the Kia Sportage was the first SUV/crossover sold in the USA from the Republic of Korea?

It arrived in the 1990s to help boost a brand that needed a reputation boost. The original fit in a new class of small SUVs, joining the ranks of the Suzuki Sidekick, Geo Tracker, and the Daihatsu Rocky. Not only did it come in a four-door SUV version, it also came in a two-door convertible. Quality issues dogged the first generation Sportage, but help was on the way.

As Hyundai and Kia became one large corporate entity, the next Sportage arrived to show it was modern enough to compete in a segment that was about to explode onto the marketplace. It looked as it was very competitive, but shortcomings still did not help this popular SUV's cause. There was a trade-off – it was very capable off-road.

By 2010, Kia changed up the Sportage again. It no longer looked like everyone else. The absence of a C-Pillar glass was controversial, but everything else made up for its unique styling. It was still quite spacious and offered powerful engines, including a turbocharged engine.

Which brings us to the fourth generation Sportage. Not only did Kia made it more distinctive, it also offered a lot more than its current rivals. It sits in the middle of what is now the most competitive segment in the automotive industry – the compact SUV/crossover. It continues to hold its own, despite the Sorento being the leading volume seller in the brand and other competitors selling many times over than the Sportage.

And, yet the Sportage is still relevant in today's marketplace. It is a unique offering that works best with families of 4-5 and other customers living active lifestyles.

We heard (in this case, read) this so many times before. Another compact SUV/crossover made for this demographic for that purpose. What makes this unique 2018 Kia Sportage worthy of these customers that are in all of the above demographical profiles?

First, I'd better talk you through its design. When I first reviewed this fourth generation of the Sportage back in 2016, I received plenty of negative feedback on the exterior design. In particular, the front end. It appeared that no one liked the blunt design with Kia's "Tiger" grille forged onto it.

However, people have finally gotten over it. The Sportage shows a distinctive face that goes along with its distinctive look. You can see it in the details: Kia’s four-bulb fog lamps, an integrated headlamp unit on top of each fender, and a grille texture that is tied to each trim level. More compelling is the fact that the front end has a higher lip. In the SUV world, we call this “having an angle of approach.” In real-world terms, it means no need to scrape curbs or those old cement parking stops.

Sweeping rearward is a modified silhouette influenced by the previous generation Sportage. The lack of glass beyond the rear door remains evident; however, the rear doors have been enlarged for a wider opening, almost 90-degrees at the hinge. The rear has been massaged with a new sculptured look with a light strip across the middle of the tailgate. New LED taillights and lower signals/backup lights finish up the look. Our SX tester came with 19-inch allow wheels shod with Kumho Crugen tires and a roof rack with two crossbars. Hmm…maybe I should've put a canoe on top of there…oh, wait, I don't do water activities!

What's inside of the Sportage is a wonderful cabin. The quality is up across the board, including the usual Kia switchgear and readouts. The instrumentation is good to check on information and may require a look down for tall drivers. The infotainment screen is also a low for taller drivers, but the controls are within reach for everyone. Those who like a sportier ride will love the short T-bar gear selector for the six-speed automatic transmission.

The Sportage is a very spacious and comfortable place to be. Front seats offer support and some bolstering, with a good grade of leather in the SX. All four doors open to an almost 90-degree angle making getting in and out very easy. Rear seat room is good, and your children will enjoy the volume of the rear area, even adult children! Not to mention, the spacious 30.7 cubic feet of cargo space behind the rear seat, expandable to 60.1 cubic feet with those seats folded down.

Those lucky to get the Sportage SX will enjoy a wonderful set of eight Harman/Kardon speakers emanating from the infotainment system. This system also includes playback via Pandora through Bluetooth, SiriusXM, and HD Radio. Kia also offers additional connectivity through its UVO app and hardware, along with Apple CarPlay and Android Auto compatibility.

Sportage customers have a couple of choices to make. You can have one of two trim levels with the standard 2.4-liter four-cylinder engine with 181 horsepower. Better still, you can choose the SX model with the 240-horsepower 2.0-liter turbocharged engine. My choice is the latter because this engine motivates the heck out of this nearly 4,000-pound SUV/crossover. There is no turbo lag, which makes it pretty quick off the mark. The six-speed automatic is a smooth shifting setup, especially with its all-wheel-drive system.

Regarding fuel economy, I averaged 23.8 MPG in my care – higher than the average stated on the sticker.

The Sportage offers one of the smoothest rides in its class. It absorbs a lot of the road imperfections in its wake, creating a great atmosphere for drivers and passengers alike. When taking on the curves, once pushed to the limits, there will be plenty of roll and lean, along with some tire feedback. Probably best to drive it a little easier through the curves.

The steering is good, offering great feedback at the wheel and a solid on-center feel. The Sportage has a great turning radius for those tighter spots. Brakes are also good. exhibiting solid pedal and system performance in both normal and panic stops.

Active safety is a solid part of this Sportage SX tester. Blind spot monitoring, cross-traffic alert, reversing camera, downhill brake and hill hold assist are among the features found on this vehicle. Though, I would love to see it come with an adaptive cruise control – but, that’s just me.

Being unique offers two outcomes: Being distinctive or being repulsive. The good news is that the fourth-generation Kia Sportage is a very distinctive, smart, and fun way to get into the compact SUV/crossover segment. Why be like anyone else when you can have standout styling, good performance, and comfortable space?

That is what the Kia Sportage is all about. It is the most fun you can get in compact SUV/crossover – period!