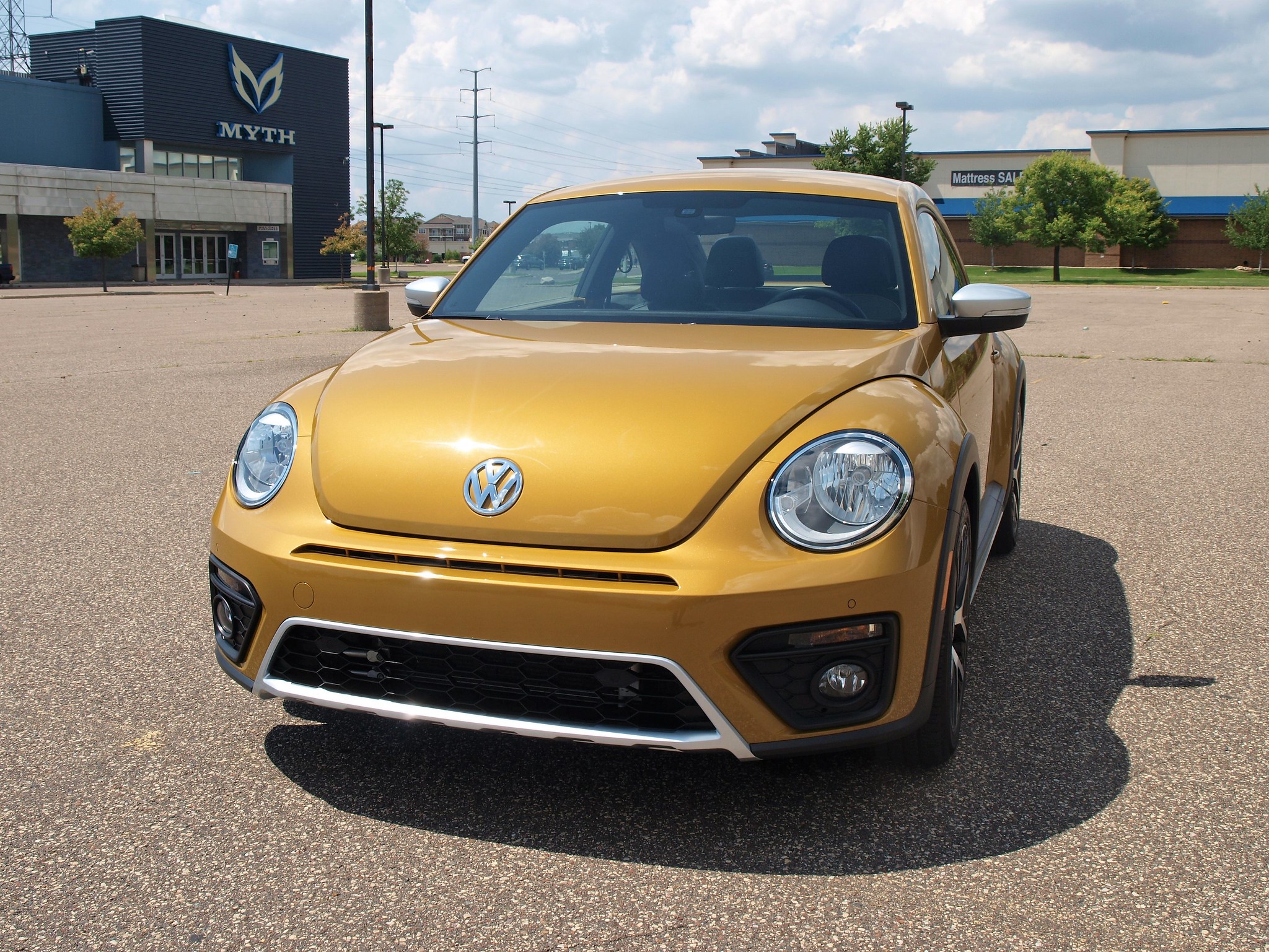 A Victory & Reseda review of the 2017 Volkswagen Beetle Dune

Remember when you first saw the Volkswagen Beetle…

The one that was a byproduct of the wrong side of history.

Since 1949, Volkswagen traveled on a path built from the Type 1 Sedan – the one we affectionately called the "Beetle." We also called it a "Bug." – still do. The formula was a bit different for American tastes: a rear-mounted, horizontally-opposed four-cylinder engine that was air-cooled. It drove the rear wheels with virtually no weight up front.

The original Beetle's shape never changed. Americans last saw these survivors of history well into the 1970s, with the final "sedan" sold in the USA by 1977. The convertible remained in this market through 1979. Production continued elsewhere – mainly Brazil and Mexico – until the last one rolled off the Puebla, Mexico production line in 2003

Then came 1999 and the New Beetle arrived in a wave of retro-design that drove the automotive industry back then. Instead of the usual rear-engine format, the New Beetle was built off of a Golf platform. That means seeing the engine up front, driving the front wheels with liquid cooling the engine.

It was cute. It tried very hard to be cute. People bought them, but not in the numbers of the original Beetle. Still, Volkswagen customers did not want a cute two-door retromobile. They wanted Jettas – the conventional four-door sedan built off of the same Golf platform.

For 2012, Volkswagen re-introduced the New Beetle. This time, they made it more "masculine." A lower, flatter roofline with more retro flair inside and a lot of modern touches elsewhere. It is still in production, adding more special editions to keep customers wanting it more. You can get the latest Beetle in a two-door coupe and convertible.

One of those special editions came out last year was the Dune. I had one to work with for another publication and found it to be the most intriguing Beetle ever concocted by Volkswagen. It was a paean to a time when original Beetle customers wanted to take these cars off-road, such as the Baja Buggy and the Dune Buggy. The imagination ran while with longer springs, thicker tires, some engine and body modifications, and, in some cases, an all-new shell. The result was something that was fun and more accessible than a contemporary Jeep CJ-5.

In all, the Beetle Dune is a throwback model for a modern time. The package visually includes a more aggressive front bumper with a skid plate, additional plastic protection strips, a rear spoiler – which is more of a "whale tail" than just a spoiler – and a lifted ride height. This visual package does a great job distinguishing it from mere mortal Beetles – the Dune is one of five trim levels available for 2017.

The Beetle's basic shape itself has an air inducing more fun than allowed in a car these days – which is really a good thing. The overall theme of this generation of Beetle was to retain all of the classic design elements of the original and prior New Beetle and make it, ehem, "masculine." Let's use the word "aggressive" instead. As I mentioned before, the roofline was flattened and the overall height was lowered. The hood was also flattened and appeared longer than even the old Beetles of decades past. Instead of mimicking the old "sedan" of the rear-engine era, Volkswagen shaped the Beetle as a coupe with an eye on other affordable models, such as the Hyundai Veloster.

Also mentioned before is the visual package of the Dune, which adds more flair and sportiness to the Beetle's exterior design. The aforementioned enhancements on the Dune make it a standout on its own merits. It gives the Beetle a certain flair, even with its model-exclusive Sandstorm Yellow paint job, rear spoiler, black wheel arches, front bumper, and striping. In all, the Dune package is a head-turning ride that exudes personality and fun.

It is worth noting that the Beetle underwent a refresh for 2017 with new bumper skins and a few enhancements inside and out. The bumper alone was influenced by the Dune – the car, not Frank Herbert's book and subsequent movie starring Sting, Kyle MacLachlan, Jose Ferrer and Patrick Stewart. Oh, and did you know it was directed by David Lynch?

Back to the car, the interior of the Beetle Dune is a mix of old, new, and theme-related color schemes. Having the color-keyed elements on the dashboard and door panels are a direct paean to its rear-engines ancestors. It actually works with the integration of a three-dial instrument binnacle that is easy to read and reference. A custom digital information center finishes off the binnacle well. It also enables a high position for the touch screen housing the infotainment system and retains a lot of the Volkswagen-specific dials and switchgear throughout the instrument panel and steering wheel.

The front seats fit all people like a glove with great comfort and bolstering all around. Manual controls for rake, recline, height, and lumbar support are simple to use and it is easy to get the right seating position behind the wheel. For adults, the rear seats are indeed a challenge, although access to the back is easy. Legroom is at a premium at above-average sized adults. Cargo space is good, even with the rear seats up and the cargo cover on. There is a lower floor for storage, but the hatch is very large and wide for making loading and unloading easy.

The 6.5-inch touch screen houses the Composition media version of the MIB II infotainment system. This system connects superbly to Apple CarPlay, as well as Android Auto and MirrorLink. With three AppConnect options, it is easy to work with while on the road. You can still use Bluetooth to connect for phone functionality and music file playback. The sound quality of the standard audio speaker system is very good, as well.

For 2017, Volkswagen offers one engine for the Beetle. The 1.8-liter turbocharged four-cylinder engine has 170 horsepower on tap with 184 pound-feet of torque. Combined with its six-speed automatic transmission, the Beetle Dune drives very well. Acceleration is solid and the shifts are smooth. This driveline sends power only to the front wheels. As for fuel economy, we have averaged 30.2 MPG in my care.

What makes the Dune unique is its ride height compared to other Beetle models. Most of it comes from its Hankook 235/45R18 all-season tires and unique Canyon alloy wheels. Behind this wheel/tire combination is a 0.4-inch increase in ride height, with an extended width of just 0.6 inches. Sometimes when there is an increase in ride height, there would be some issues with driving dynamics. Actually, there wasn't. When pushed on country roads, the Beetle Dune rode near-flat through the corners, while absorbing the cracks and imperfections on the road. The ride quality is very good and the handling is just as fine.

The steering is very responsive. Turns are sharper and on-center feel is on point. The brakes are also good, with excellent pedal feel and solid stopping power. Both normal and panic stops resulted with a confident feel and feedback all around.

This masculine, ruggedized 2017 Volkswagen Beetle Dune is quite good. That's what I gleaned from this round. It has a niche market, including those who want the convertible over the coupe. And, there were plenty of people giving it interested looks at the Dune model.

So, why aren't they buying it? It is perhaps that such niche markets are very small. In July of 2017, customers took delivery of 651 Beetle Coupes, in comparison to 831 Hyundai Velosters. Lexus customers took delivery of a lesser numbers of RC coupes. If there is a bright spot, please note that Volkswagen sold an additional 708 Beetle Convertibles in the same sales period.

These numbers are frustrating, to say the least, but one can conclude that no one is buying two-door cars as they did in the 1980s and 1990s. It's a shame, really. You can't even get a two-door Golf or GTI anymore…and the enthusiasts aren't happy about that fact.

It is worth repeating – the Volkswagen Beetle is a very good car. It is great for college students that are either commuting or living on campus. It is great for empty nesters who do not need a big sedan or SUV with no one else to tool around other than themselves. Single people should be happy to drive such a fun car like the Beetle.

So, why aren't you buying them? If you love a small coupe and want something that induces fun instantly – this is it. Better still, get the Dune version. But, please skip watching the movie…I meant "Dune."