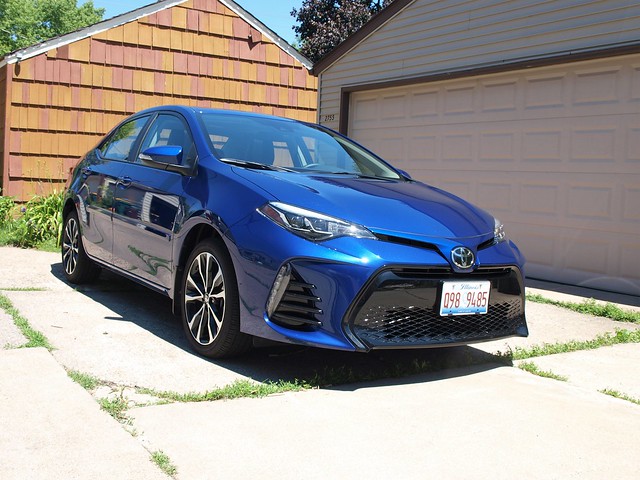 A Victory & Reseda review of the 2017 Toyota Corolla

Every time I get a Toyota Corolla to work with, it bears repeating the importance this single car has on this planet.

That importance simply comes down to the numbers. Over the last 50 years, Toyota has sold over 43 million Corollas – and counting. It is one of the best selling models in the Toyota lineup in the USA, now equaling the delivery rates for the midsized Camry and compact RAV4 SUV. It remains the best-selling car in dozens of countries.

While American consumers value the Corolla as a default for a small, but spacious sedan, other global markets view the same exact car as something to aspire to own. In some other markets , consumers see the Corolla as a direct competitor to some of the other best-selling cars in the world – namely the Volkswagen Golf.

We can get into cliches and overstated plaudits about Toyota's global sales leading model. But, there is a reason why there is another Corolla featured on this website – it has been revised and re-imagined for 2017.

I can see your enthused. But, let me talk you through this one. Like the Camry and RAV4, the Corolla is Toyota's bread-and-butter. It has been for 5 years. This current generation has taken this core model further than ever before, employing Valvematic technology for greater fuel efficiency and increasing the interior space to levels never experienced in its long history. 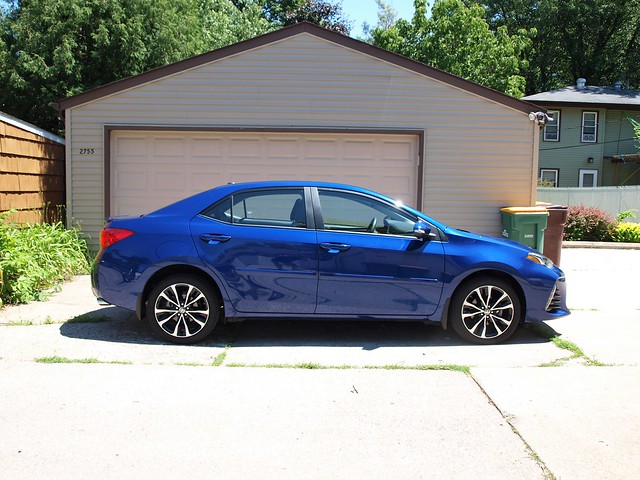 This mid-cycle refresh for 2017 has taken the Toyota Corolla a couple of steps further. First, the model lineup has expanded and reshuffled into the same two-tier strategy seen on the Camry. Mainstream models get their own new front-end clip with appropriate interiors and trimmings. Those models include the base L, the LE, the LE Eco with the 140 horsepower Valvematic engine and the XLE luxury model.

Formerly at the top of the range was our favorite Corolla – the S. Sadly, the S is no longer offered. Replacing it are two new sport models – the SE and XSE. They come with their own front fascias, sportier trim – the SE is in cloth, the XSE gets SofTex material – and standard 17-inch wheels. Our tester just happens to be the XSE, which constitutes the true top of the range for the 2017 Corolla lineup.

Also new for 2017 is the addition of Toyota Safety Sense-P, which is a suite of active safety features designed to protect both vehicle and occupants. This suite is standard on all Corollas – period! It consists of a bundle of features including Pre-Collision System with Pedestrian Detection; Lane Departure Alert with Steering Assist; Dynamic Radar Cruise Control and Automatic High Beams. Even the base L model gets a rearview camera standard.

In terms of infotainment, Toyota went further to spread its Entune system on various levels across the Corolla lineup. Every model has standard Bluetooth connectivity, while upgraded models have a 7-inch touch screen to work with. The XSE offers standard navigation using the Scout GPS Link app. 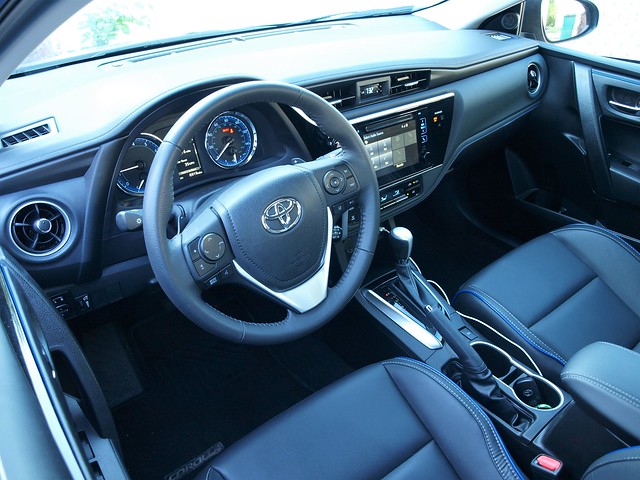 To sum it all up, we have what is now the safest, most equipped and advanced Corolla in its history. With a starting price of $18,500 for an L model with the 132-horsepower 1.8 liter four-cylinder engine and Continuously Variable Transmission, it is also a great value. Even the XSE is a great value with its base price of $22,680. Our tester came in with a sticker price of $24,416. Again, all great values so far!

But, that's not the end of the story. I want to go back to the word I used earlier – "default." It is such a negative word, when you consider the automotive marketplace as a whole. To say one is a "default" states that there are no other choices to make for customers in a certain class. It also speaks to the stereotype of Corolla customers as being "sheep" or lacking any imagination beyond what it being offered.

That glass is half-empty. Let me fill it up for a moment. The one thing brands and manufacturers love are repeat customers. They love loyalty. If you made a product for five decades that has been proven reliable, with a high quality build that offers the right equipment for owners to utilize, then customers will return to buy another one…and another…and so on.

You do not sell 43 million units of a single product without a huge loyal following. This is a basic business principle that ensures a product's success. You want new customers – "conquests" as they are called in the automotive business – but you want to continue to improve the product for your loyal customers to keep on coming back for more. 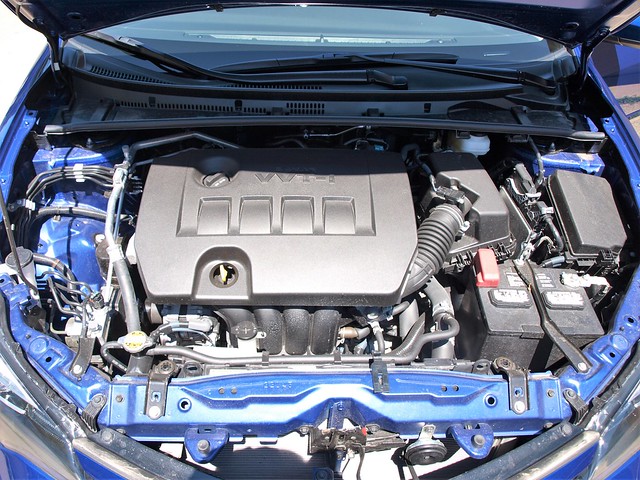 This is why the 2017 Toyota Corolla is an important car for now. Therefore, we should change our perception and language we use regarding the Corolla. Don't call it a "default!" Don't look at it with prejudice because it is not cool. It is not an AE86 driftmobile or the super fun FX16 GTS of the past.

What the latest Corolla represents is a willingness to engage with consumers who need more than just transportation. It still speaks to a customer's basic needs, but those needs have changed along with their wants. Safety is a big component of this change. By adding the Toyota Safety Sense-P package to the Corolla ensures a sense of security customers want in today's automobiles.

Toyota included the key elements for this safety package – the ones that will keep even good drivers on the right track. To get radar cruise control on a Corolla is for people to learn not to tailgate on the highway. Lane Departure Alert is to help ensure that the Corolla and its driver stay within the lines. These are the basics in driver etiquette that were addressed in this car.

Meanwhile, one does not expect the XSE's 132-horsepower 1.8 liter four-cylinder engine to be as quick as a Honda Civic Touring or a Hyundai Elantra Sport. It simply does the job. It never feels taxed, even with the added safety equipment on board. It will maintain highway speeds, especially with the radar cruise on. 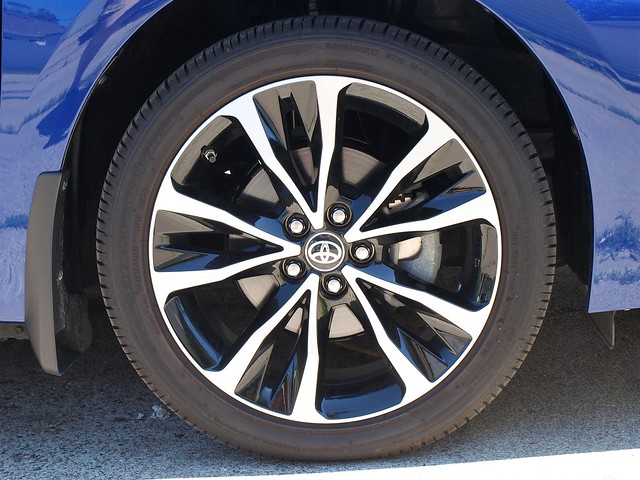 The CVT is OK. It does what it does by winding up the engine before dropping it into a proper rev space at speed. Though I found some odd behavior in the CVT, such as surges when it is suppose to settle or not providing the right response to the throttle – even in passing maneuvers. I get why the CVT is important for better efficiency, value and so forth. It does that quite well. But, a customer looking at the Corolla's sportier models would be better served with better CVT software, similar to the Honda Civic's own pulley-driven transmission. Rather, a transmission with ratios – like an automatic or a dual-clutch gearbox.

And, yes, I'm being very nitpicky.

The positives on the Corolla truly outweigh the complaints. The mid-cycle refresh gave Toyota a chance to improve a few subtle areas. The center stack's piano black surface might not be a great choice, but the new flush switches around the Entune touchscreen give it a more upmarket feel to match the XSE trim. I always like the shifter with its notched operation. To me, that gives it a sportier feel and better control.

For the record, this Corolla XSE averaged 32.8 MPG in my care. This is about where I normally see fuel economy for this generation of Corolla – the iM hatchback, included.

What makes a Corolla is the fact that families can have more than enough space to get around. The XSE's front seats offer solid bolstering to before its sport-luxury status. The SofTex seating feels like a durable grade of leather. The blue piping adds to the sport-luxury theme of the trim level. Rear seat room is big – and not just for kids. Though trunk space is rated at 13.0 cubic feet, it looks more spacious. You can still fold down the rear seats for longer pieces, however. 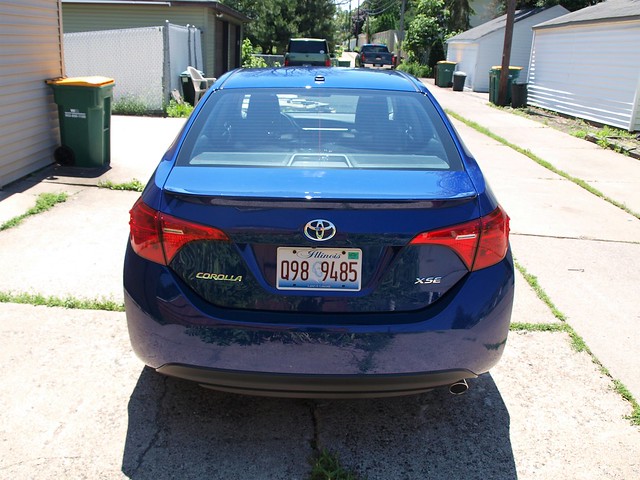 As with every Corolla I've driven, the ride quality is fine. The handling is solid. The steering is fine, though would it be nice to have a smaller diameter steering wheel for the XSE? I know, I'm nitpicking again. Brakes are also good with solid pedal feel and good stopping power in normal and panic situations.

From what I gathered here, the 2017 Toyota Corolla is a competent, but pretty good car. It is easy to own operate and live with. That's all you really want to know, right?

Well…here's another cliche: There's more to the story.

Consider that I have been very familiar with this current generation of Corolla – the eleventh generation, also known as the E170 – since attending its regional media drive in 2013. This is my third E170 Corolla to work with, so there might be some feedback that I see over the course of several model years. Yet, I do recognize that it has taken a higher spotlight because of a sales trend seen at Toyota dealers of late.

If I took the latest sales figures from Toyota – based on May 2017's report on monthly deliveries – one Corolla is sold for every Camry sold in the USA. Meanwhile, the RAV4 is leading all models in terms of sales volume for Toyota. The days of a sedan leading the charge for Toyota may have already ceased. 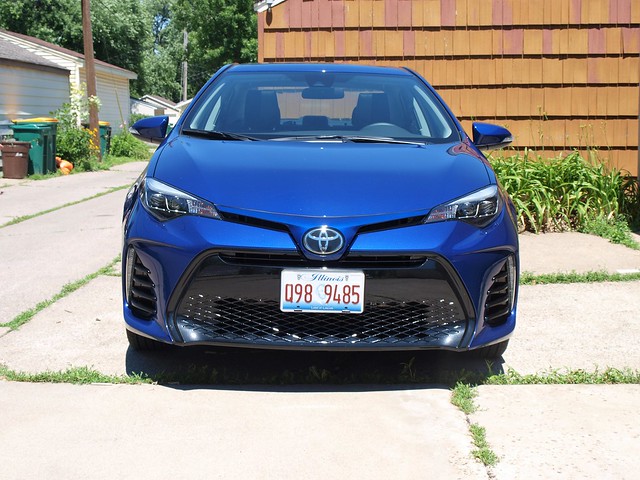 Yet, this missive is about the Corolla – the world's most popular and best-selling automobile. It is currently the third selling vehicle of the brand in the USA so far in 2017. Based on what I have experienced with this latest Corolla, the American consumer will continue to pick this car as a solid transportation choice. But, not by default.