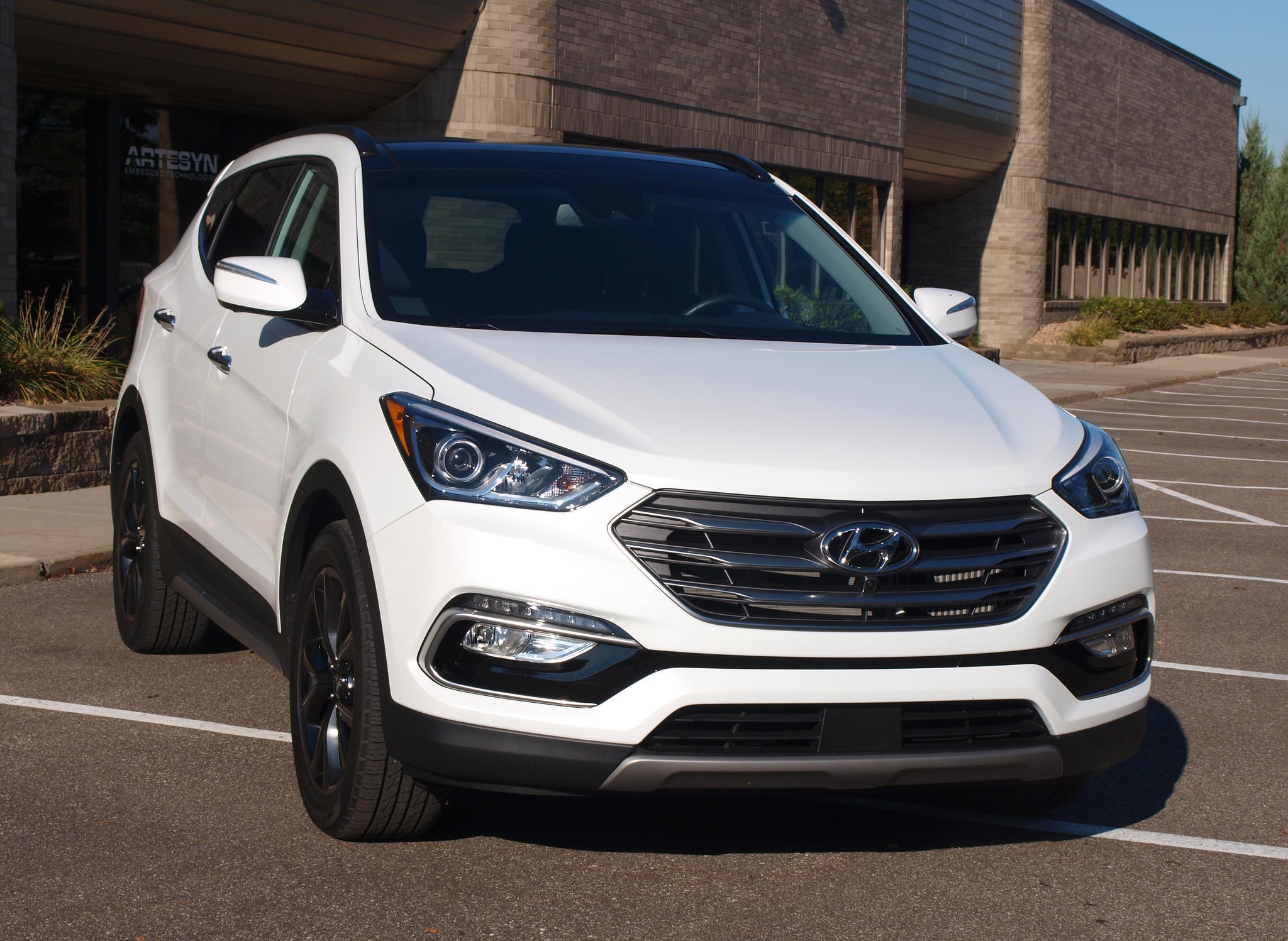 A Victory & Reseda review of the 2017 Hyundai Santa Fe Sport

A soundtrack can empower the driver. Rather, it could be just a song.

In my iPhone are 200 songs. One in particular became the soundtrack for my journey home from the 2016 Midwest Automotive Media Association Fall Rally and 25th Anniversary. It is somewhere among the greatest hits of my lifetime and some of the tracks I specifically remembered from my high school days listening to KROQ and KDAY back in Los Angeles.

The song in question is called "Heading Home" by Electronic Dance Music artist and producer Griffin – also known as a New York City native named Dan Griffith – with vocals by Australia's Josef Salvat. The track is an aural landscape that echoes the call of the wandering soul wanting to head back home. If you listen to it anywhere – in my case through the northeastern swath of Iowa – you the echo becoming a call to come home soon.

There were other tracks that help along the way. One of them was an old 1980s chestnut from a group called Wire Train – one of the groups that defined the 415 Records sound. Their classic song, "Chamber of Hellos," became an intersection that brought Los Angeles, San Francisco, Minneapolis, Chicago and the Iowa landscape together. It was a strange geographical mixture from such a textural sound unique to the New Wave/Alternative scene in San Francisco in the early-to-mid 1980s.

I could name others, such as the Sub Focus remix of deadmau5's "Ghosts 'n' Stuff" and "Home" from EDM artist Topic with Nico Santos on vocals. They all came alive while traversing the Iowa and Cedar River flows through a set of Infinity speakers and its accompanying audio reproduction technology.

As it was stated before, this story is about going home. The road home was made possible through the turbocharged power of the revised 2017 Hyundai Santa Fe Sport. It was the right vehicle for the job.

The Santa Fe Sport was considered "right" for various reasons. Some of which we will delve further in this review. But, there is a bit of an issue to bring up here. In North America, there are two Santa Fes – the two-row Sport and the larger three-row model. The latter has exclusive V6 power and mass to match its intended job – being the foil in a very important segment for families. It has to compete against the likes of the Ford Explorer, Mazda CX-9 and Toyota Highlander – no name a few.

On the other hand, the Sport falls into a category that is best described as being a "tweener." It is caught in-between the big family haulers and the more popular concentrated models. That is not to say that the Santa Fe Sport has its competitors. Chiefly, it is put up against the Ford Edge – another two-row "tweener" offering.

Now that we got that out of the way, let us talk about the Santa Fe Sport. It befits its name quite nicely – "Sport." This Hyundai simply looks sporty. Size-wise, it fits being a two-row active crossover. The rear end has a rakish slope to it, befitting its purpose. Throughout the exterior, there is a tightness to the Sport — gym-toned and ready for action anywhere.

For 2016, the Santa Fe Sport gets a new grille texture, new headlamp design, better daytime running lamps and a new tail lamp design with additional LED bulbs. Our 2.0T Ultimate AWD tester came with graphite finished 19-inch wheels. This particular model has a more upmarket feel than more basic versions of this SUV. The chrome finishing was tasteful and did not detract from the overall vehicle design.

This design notion is reflected in the cabin. It is an all-black affair with nice leather upholstery for five and the plethora of Hyundai touches in the switches, knobs and other controls. In other words, this is a high quality cabin worth taking the long way home in – or, to relax during a nasty commute. The instrument dials are big, with a nice TFT screen in-between for trip and vehicle information.

I found the seats to be balanced between firm and supple. There is some bolstering available to keep me in place some of the time. Power adjustments are available for lumbar, recline, rake, and height to provide better comfort for most drivers. Rear seat room is also adjustable for rake and recline. I found that if you push the seats back, you can get five adults to ride along in the Santa Fe Sport. Cargo room is expansive – 35.4 cubic feet behind the second row, stretching to 71.4 cubic feet with the rear seat down. The cargo hold is great for flat-packed boxes and putting the new big screen television down on its side.

Infotainment starts with a big 8-inch touch screen that houses a lot of options. I can connect my smartphone via Bluetooth or a USB cord, however it only offers full smartphone connectivity through Android Auto – not Apple CarPlay. There are other broadcast audio options via HD Radio and SiriusXM. Sound comes from a terrific Infinity 12 speaker premium audio set-up. This speaker set-up is much better than most I have worked with in this class of vehicle.

The finishing touch is the available panoramic roof. This really makes the cabin a lot more airy and light when the shade is pulled back. It is also easy to use, thanks to separate roof and shade controls.

If one thing that makes this Santa Fe Sport worth driving is the engine that is under the hood. The lineup starts with a 2.4 liter four-cylinder engine, but that is not the one to choose. You need to tick the box for the 2.0 liter turbocharged four cylinder engine. With 240 horsepower on tap, the turbocharged engine runs smooth and quick. This is the newest version of the 2.0 liter turbocharged engine from Hyundai, which represents a 25 horsepower drop from last year’s model. But it really does not feel like there is a loss in horsepower – rather, a gain in it. There is also nominal turbo lag present on this new engine.

Adding to this mix a six-speed automatic transmission and the all-wheel drive system. In all, this driveline is superb for every use. The result is improved fuel economy – an average of 24.0 MPG was achieved during its time with me. That average never fluctuated even after its long run through Iowa home from the MAMA Fall Rally.

Another thing that won me over on the Santa Fe Sport was its ride quality. It is smooth, though it offered some road feedback on rougher surfaces. The dampers worked extremely well in keeping things balanced on any surface. On the hand, the Santa Fe Sport’s handling reveals a tinge of roll and lean through the corners. On subtler turns, it corners near flat.

Steering is quite good. On-center is fantastic, while turns are good and wheel response is precise. Brakes are also good, with solid stops in normal and panic situations. Anti-locks work extremely well in extreme situations. It also helps to have a great set of active safety features on-board, including adaptive cruise control, lane change assist, reaview and multi-view camera – including a great 360-degree view – rear cross traffic alert, and blind spot detection. That's just naming a few…and all of works extremely well.

The standard Santa Fe Sport starts off with a base price of $25,350. Our 2.0T Ultimate tester came with a sticker price of $40,820. This is an interesting point, which can be seen two ways. One, with the equipment level and its class positioning, the pricing seems to be on par, when considering that smaller SUVs are reaching well beyond the $36,000 mark and larger ones are easily available at the $45,000 price point…and even more. However, can anyone justify the near-$41,000 price tag for a four-cylinder, turbocharged, fully-equipped two-row "tweener"-sized SUV that is not of a premium badge and pedigree? Either argument is valid…and for the consumer to decide.

The revised 2017 Hyundai Santa Fe Sport proved itself along the grueling ride home – even through the most boring section of the trip along US Highway 20 between Cedar Falls and Interstate 35. It dodged the semis on Interstate 80 and made the traffic in the Twin Cities a bit more cope-worthy. Back home, the Santa Fe Sport showed what it was made for – the ability to be a solid two-row SUV for a modern purpose.

To enjoy such a solid vehicle, all you need is a soundtrack. No matter the landscape or the destination, just take the long way home and dial in your favorite song.