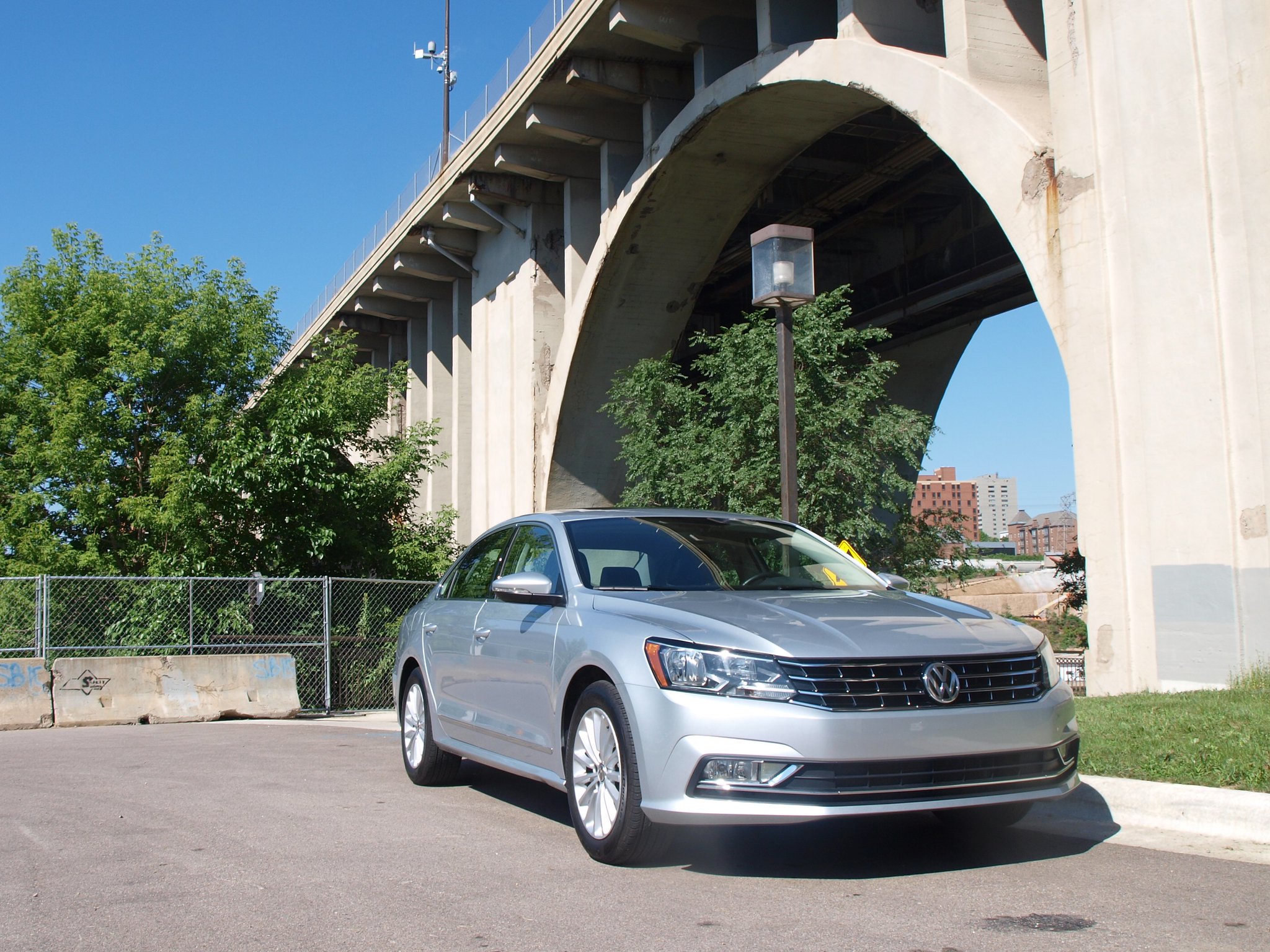 A Victory & Reseda review of the 2016 Volkswagen Passat

Don't you love it when people react to comparisons…because their horse didn't win?

Seriously? Your car did not win a major comparison by a well-known and respected outlet based on extensive testing and real-world findings? What is this, the vote for the Major League Baseball All-Star Game? The Kentucky Derby? Pokemon GO?

Scratch the last one…but there is a point here. My friends at Cars.com recently did their bi-annual Mid-Sized sedan comparison earlier this year and concluded that the Volkswagen Passat was their best in this class. Because people were still bent on the whole TDI diesel emissions scandal, the court of public opinion – also known as social media – cried "foul."

Again, seriously? You do not believe that a Chattanooga, Tennessee-built, German-engineered mid-sized sedan can outdo similarly sized and equipped sedans made by North American and Asian brands? You seriously think that anything coming from VW has been tainted with an emissions "cheater" module – especially when it's fueled by 87-octane gasoline?

Just like the car community I am involved with, there will be haters. And, haters are going to hate. I probably said this a few times about a lot of the vehicles I have reviewed on this site and elsewhere in the media world. Why? Because you hide behind your mobile device – in-between catching Pokemon at some random location somewhere – or your laptop thinking you are the smartest person in the room.

I'm not that guy. I never got the 4.0 grade point average in my entire educational career. Nor, should that be the measurement of intelligence, especially when working in specific fields. I know what I know…experience, re-education, and understanding of basic and mid-level business practices and complete industry understanding. But, who cares? You read this site to see what Tyler Lipa and I have in store for your reading pleasure.

But, some people need to take a chill pill and not be asinine trolls on the interwebs. Seriously! I am sure there are more productive things to do than spew pseudo-intellectual garbage on any given social media channel?

Offended? Great! Now, let's talk about the revised 2016 Volkswagen Passat, shall we?

The original version of this generation of Volkswagen Passat garnered plenty of discussion on its overall design. Those who are Volkswagen people consider the new Passat as more "American," than "German." Perhaps it is because of its extended length and width in comparison to the European market version. Yes…there are two Passats globally – both on the same platform, but one was designed for our side of the Atlantic. Probably my biggest complaint that it was rather plain for a Passat. The last few models were quite upscale and aspirational. The last few years were more seen as a vision of what a Camry made by Volkswagen should be.

This mid-cycle refresh for 2016 addressed this complaint. The grille is more three-dimensional with new headlamp lenses and a more aggressive front bumper. Slight chrome trim changes were made for better attraction to the car, even though the side silhouette has not changed. Volkswagen worked on the rear end, which includes bigger taillight lenses, a better trunk lid design and additional chrome trim. My SE 1.8T example came with handsome 17-inch alloy wheels shod on Continental ProContact tires.

While the Passat has grown in size, it does exude some superlatives that seemed to be missing from its mid-sized family sedan rivals. For example, having all four doors open wide to a near 90-degree angle. The doors are extremely large, which reminds me of full-sized cars prior to the downsizing trend of the 1970s. So far, this is a Volkswagen that is fit for me.

The notion of living large awaits when you open all four doors. Spacious is just the tip of the iceberg. As this is my third current generation North American Passat, every one recalled one simple fact: A family of five can live superbly in one. There is more room inside a Volkswagen Passat than in most full-sized sedans. You can fit three adults in the rear seat without a problem. I sit comfortably behind the wheel on Leatherette upholstery, even though I am missing key bolstering in the seatback. I could use some more bolstering in the cushion for the SE. I was told that if I upgraded to the SEL or get the R-Line, I could have that.

Another complaint by the Volkswagen faithful was in the "plain" instrument panel that the Passat installed in their North American version. Don't worry, they addressed that issue, too. It is simple and logical. The switches are pure Volkswagen, including the short throw shifter for the automatic transmission and the stalks on the column. The instrumentation is also pure Volkswagen – familiar and engaging. If you have been in many Volkswagen products, why would you complain?

There’s the gray "wood" and surfaced metal trim that offsets the instrument panel, the center console and door panels. They helped the cause for the Passat's cabin being more upmarket for its middle trim. The steering wheel is new, along with its controls and improved quality and feel. I would like a thicker rim on the flat-bottomed steering wheel, but that would lead me to the R-Line or SEL, of course. I also like the interface for the new MIB II infotainment system – the focus of the center stack, above the logical climate control system. This is a touch screen that works very well.

How well? This SE came with the Technology Package, which upgrades the MIB II system to the Discover Media version – the top rung of the new infotainment system’s family. This system includes various audio options from SiriusXM to Bluetooth music file streaming. Navigation is also included, with decent mapping. However, the MIB II system adds an additional layer by adding compatibility with Apple CarPlay, Android Auto and MirrorLink. Using only the USB connection to your smartphone, these mobile connection options transforms the touch screen to access key apps to use inside the car. I used Apple CarPlay, which looks great with the MIB II system as it emulates the apps from the phone. Even with better Bluetooth connectivity and pairing, Volkswagen has transformed their infotainment options for the better.

One more thing: the trunk. While the official cargo capacity reads 15.9 cubic feet, the trunk space is long and can accommodate a lot of suitcases, a big shopping trip and some flatpacked goodies. The rear seats fold down for even longer items – like more flatpacked goodies.

Under the hood is what is now the standard bearer of all Volkswagen engines – the 1.8-liter turbocharged TSI four-cylinder engine. In terms of numbers, this engine puts out 170 horsepower and 184 pound-feet of torque. These are among the average within this class. However, the big difference is how this engine responds to your right foot. It is fluid with nominal turbo lag. Plus, it is designed to be efficient. My average fuel economy in this Passat was 29.0 MPG.

Connecting to the TSI engine is a six-speed automatic transmission, with Tiptronic mode. Translation, you can do your own shifting by flipping the shifter over to the plus/minus area for better control. It is a smooth sifting transmission, and quite responsive. The Passat is only front-wheel drive, which is great dealing with traction in various situations.

Want another point of contention with Volkswagen enthusiasts? The Passat is too soft. Well…yes, it is…and for good reason. If I want a big sedan and want to drive around friends, co-workers, clients and enemies, I expect a ride that is smooth and supple. Only a few cars in its class have delivered on the ride quality I am looking for. The Passat takes the prize for the smoothest of them all. The suspension works hard to absorb the expansion joints, bumps and cracks. I can relax behind the wheel of the Passat, which a few cars can do these days.

In terms of handling and cornering, I found the Passat beyond competent. It gets into the curves pretty flat. On cloverleaf ramps, there is a definite roll and lean even before the limit. Obviously, I do not expect the Passat to act like a GTI or Golf R through the twisties. Yet, I think customers looking for a mid-sized family sedan will be more than happy with the way the Passat goes about its business on the road.

With every current generation Passat, I found the steering action a bit on the light side. Its lightness actually allowed for a tight lock-to-lock ratio with a very good turning radius. In all, it is simply fine. Braking is absolutely great, with excellent pedal feel and braking power. Stops in normal and panic situations are solid.

The one thing I look for in a sedan is the ability to seat at least four of us in absolute comfort. During my time in the Passat, I drove a co-worker and our boss to lunch and back in the pouring rain. They actually enjoyed the ride. Whenever I want to bring a few friends for a nice ride beyond the Twin Cities, I now know how much the Volkswagen Passat will satisfy everyone on board. You do not need a huge, $65,000-plus luxury flagship to have people get comfortable and enjoy every mile along the way. This under-$30,000 mid-sized Tennessee-built, German-bred sedan is simply just the right car for the job.

To consider the question whether the shock of the Passat's win at the Cars.com mid-sized sedan comparison was indeed a surprise, let me say that it was indeed a solid win. For the same money as one of those high volume selling sedans, you simply cannot go wrong the Volkswagen. And, right now, they can use every customer they can go to at least drive the Passat.

Seriously, if it were my money – the Volkswagen will do nicely.