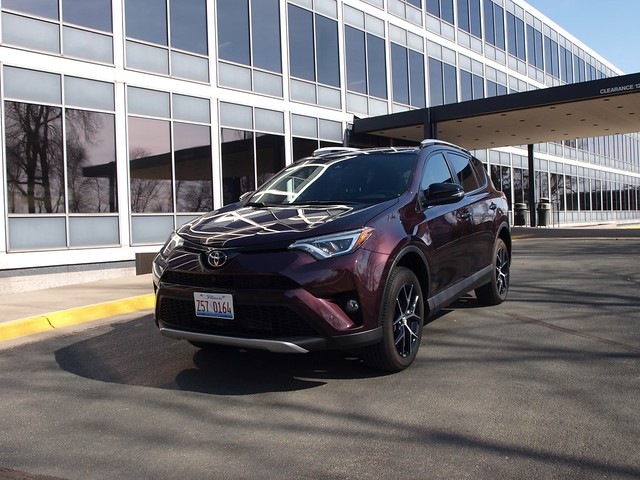 Two years ago, I considered the Toyota RAV4 a middle-of-the-road choice in a very hot market segment.

At that time, the Honda CR-V ruled the roost, with its large cabin and conservative looks. The competition got hot, with the Ford Escape, Nissan Rogue, Jeep Cherokee and Chevrolet Equinox jockeying for the family dollar, alongside the Honda and Toyota. The first quarter of 2016 told a different tale, as sedans began to take the lead in sales overall above crossovers and SUVs. In April, we saw that trend return in favor of compact family trucksters – and almost everyone benefited from that trend.

Having driven each and every one of these sales leaders, I am often debating on which one should be satisfactory for most everyone's use and taste. To say that "everything is good" is a cop out. Something has to stand out and satisfy a wide swath of human kind.

Recently, I had the chance to revisit the Toyota RAV4. I had a hunch that something was up in the mid-cycle refresh for 2016. So, I went with my gut, and…

OK, the 2016 mid-cycle refresh was indeed the improvement I was looking for in the RAV4. The front end alone now gives the RAV4 personality. The slimmer headlamps with LED daytime lights are brighter than previous models. The slimmer upper trim lends to a deeper, sportier lower grille for better breathing. That grille is split by a bumper trim and adds to the aggressiveness the RAV4 had been lacking is the recent past. At the rear, new LED-infused taillights add to the new image of the crossover/SUV.

Aggressive is a new term to use on the RAV4. It moves it from the middle of the road to something more interesting and desirable. The tester I drove, the new RAV4 SE model, is a prime example of what Toyota can do when they want to bring in new customers to a popular vehicle. With the SE, some trim pieces get a black motif, adding the aggressive new look of the RAV4. The finishing touch is a set of eighteen-inch black-and-chrome sport wheels that give the RAV4 SE an evil look. Add the tester's Black Currant Metallic paint job, and we have something really special.

When was the last time you read these superlatives about a RAV4? 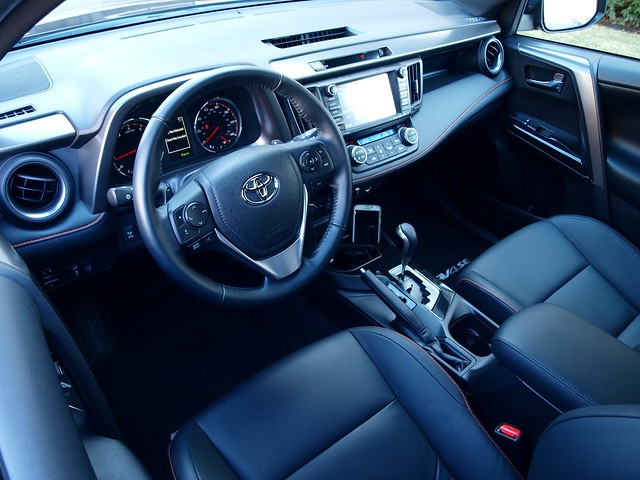 The goodness continues inside, where the quality level of the interior has improved. In the RAV4 SE, material quality is raised, even with the usual Toyota switchgear found on almost every model made by the brand. Add contrast stitching, and the SE has a feel that is not found on a lot of its rivals. There had been several changes for the 2016 update, including an improved instrument binnacle, a better center TFT information screen and updates on the Entune infotainment system.

The SofTex seating was also befitting of its badge with better bolstering in the cushion and seatback up front. While supportive, they are also comfortable. Rear seat room is excellent for tall passengers to enjoy the ride. Cargo space is quite good, too. Add a set of 11 JBL GreenEdge speakers, and the cabin is much better place to take a journey in. Not much in the basics have changed in terms of interior space and utilization. Yet, choosing the SE is a much needed upgrade for those looking for personality in a compact SUV/crossover.

Even with improvements inside and out, the RAV4 did not change in the way it is motivated. The standard 176 horsepower 2.5 liter engine is connected to a smooth 6-speed automatic transmission and a solid all-wheel drive system. In total, the RAV4 is a wonderful vehicle to drive – compared to others in its class. It is simply just right when and where you need it to be. It also helps to gain solid fuel economy, as in the 27.0 MPG average I earned with the SE.

While we are on the subject, there is a new driveline available for the 2016 RAV4. Since the demise of the Ford Escape Hybrid, Toyota has brought back the gas-electric propulsion combination to the class. The driveline is a familiar one – a 2.5 liter engine connected to Toyota's Hybrid Synergy Drive system. You can get this only with the Continuously Variable Transmission and a specific all-wheel drive system matched to the hybrid propulsion set. 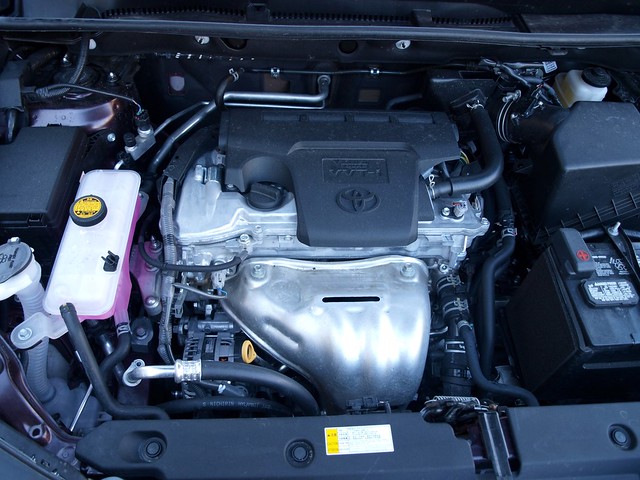 Back to the RAV4 SE, I found that it drove very well. Perhaps they did some changes. There is a Sport mode that helps make things a bit more exciting without taxing fuel economy. Overall, the RAV4 SE is one of the better driving SUV/Crossovers in its class. The ride is very solid and absorbent, handling tend to be on the soft side, but the SE is much more controlled than most vehicles in its class, steering is solid with a good turning radius and feel and the brakes are quite good. Most RAV4s might feel "normal," the SE is more my kind of driving experience for a smaller crossover/SUV.

One big addition was made on the 2016 RAV4. Toyota is pushing to include an active safety system suite that is affordable, compared to other manufacturers. This is called Toyota Safety Sense P and the RAV4 is the first Toyota to implement this onto their vehicles. Included in this package are features such as Pre-Collision System with Pedestrian Detection, Lane Departure Alert with Steering Assist, Auto High Beams and Dynamic Radar Cruise Control.

To get into the revised 2016 Toyota RAV4, an LE with front-wheel drive starts off with a base price of $24,350. My RAV4 SE AWD tester came with a sticker price of $34,745. Granted, that is on the high side of the segment, but it appears to be average price for fully loaded versions of almost every compact Crossover/SUV I have driven in the past year or so.

Is it worth the price? One may argue that you can get away with a RAV4 LE or an XLE model and call it a day. Most Toyota customers might just do that. However, not everyone is a typical customer. Some want superlatives. Some want to have fun while taking families over miles of highways for vacations and such. Some of us have personalities. 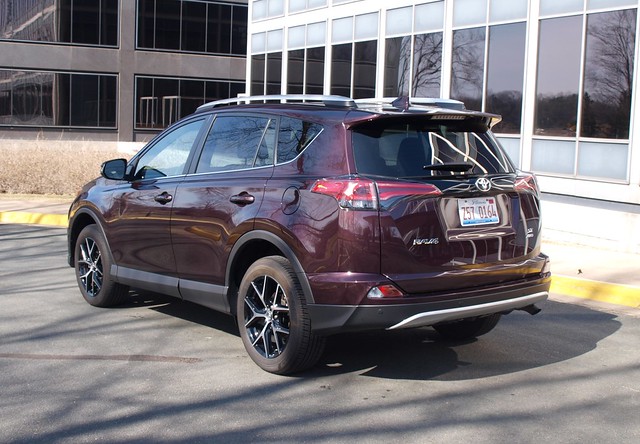 Overall, the 2016 Toyota RAV4 has a personality…and it's catching on with everyone. If you choose the RAV4 SE, you may just be the coolest person on the block. It feels good, doesnt it?