It was cause for celebration.

As V&R's Fifth Anniversary culminated, it seemed appropriate for things to be aligned, as such. Our dinner at Joey Nova's in Tonka Bay near Lake Minnetonka was a great time for all. They even baked us a cake. My hat's off to Gary Ezell and his staff at Joey Nova's for the cake and the card we received in honor of the occasion. It was also great to see those in attendance to mark the occasion.

The next day was marked with a breakfast at Fat Nat's Eggs in Saint Anthony Village with members of MN Audi and MNVW, along with appearances by Kirsten Jan of Auto Vault (and the Lamborghini Huracan) and the MN/WI Car Queenz (whom we missed, as we headed to the next stop). This lead to our fulfillment of our sponsorship of Minnesota Nissan Infiniti's Spring Has Sprung show at Running Aces near Forest Lake. We had two of MN Scion's vehicles with us – Nick Shabert's Lil' Limo xB and Justin Wolff's tC in Kannonball Fun Charity Run livery. Our "V&R Land" was fun, as was the rest of the show – with about 500 vehicles in attendance. It was a great close to an anniversary celebration.

It was also good to see Victory & Reseda's staff writer and site collaborator, Tyler Lipa, again. This time, it was an pleasure meeting his wife Katelyn. After their arrival from Bloomington, IN, they came out for the dinner, then we went on our merry way after the MNNI show to tour the Twin Cities before settling down for a fantastic dinner at the Lone Oak Grill in Eagan.

In all, it was a great weekend. It was a fitting close to a celebration that was borne from the rise of the automotive blog and social media influencers crafting their space to cover this industry and its products. After all, Tyler and I were "influencers" once – I think we still are.

There was one component that made this anniversary celebration worth it.

Victory & Reseda has always been about the automobile. The car (or truck, van, SUV…) is always the star. In this case, I could not of a better "star" to take center stage along with Tyler and I.

Before we talk about this "star," there is a backstory. You probably read or heard about this before, but the first vehicle ever delivered by an OEM for the purpose of publication was a 2011 Lexus IS 250C. It arrived as part of the backdrop of my completion of my graduate school studies. It might not have launched a thousand ships, but it certainly launched this site to what it is today. 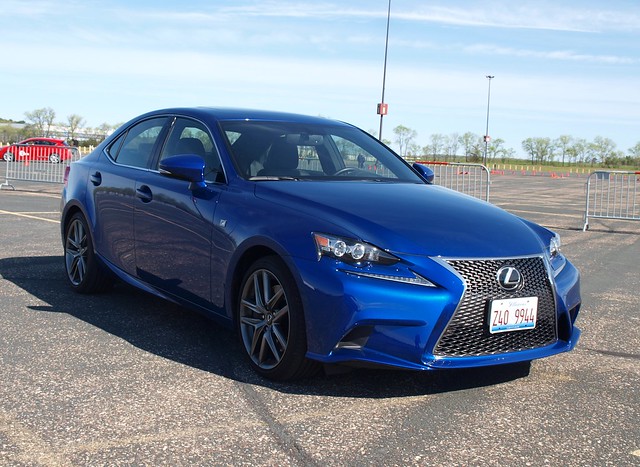 Five years later, another special occasion yields another Lexus IS. It came in the shape of an Ultrasonic Blue Mica 2016 IS 200t F Sport. Very apropos, right?

This is my second turn in the third generation IS, since my first run in the 2014 IS 350 F Sport AWD. Since then, the IS had a reshuffling of engine and driveline choices. For example, the IS 250 is done for, as is its 2.5 liter V6. It is replaced by a 241 horsepower turbocharged 2.0 liter four-cylinder engine, featured in our tester. This is the first four-cylinder IS variant ever sold in the USA. Otherwise, there are two versions of the 3.5 liter V6 – a 255 horsepower IS 300 version with standard all-wheel drive and the IS 350 with 304 horsepower.

The IS 200t is offered only in rear-wheel drive, but with the brilliant 8-speed automatic transmission. The turbo engine, as seen under the hood of the NX 200t SUV, offers 258 pound-feet of torque. In comparison, both horsepower and torque numbers are huge improvements over the old IS 250 model. It is a solid engine when completely motivated, but I did find some turbo lag when doing passing, on-ramp and uphill maneuvers. Otherwise, it is a decent engine, even if it has to pull 3,583 pounds worth of premium compact sedan. In turn, the IS 200t did average 23.5 MPG on a combination of city and highway driving.

While the engine is a very important piece of this Lexus IS 200t, the rest of the car is really a wonderful piece of machinery. 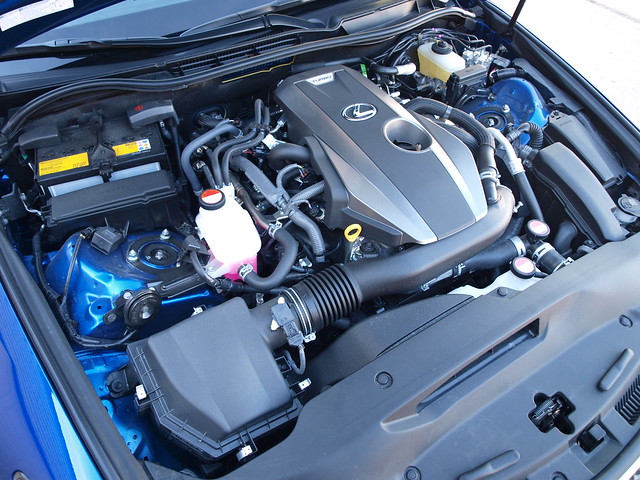 For example, the suspension set-up is one of the best out there. It really tracks extremely well and provides a great balance between ride quality and handling. Cornering is superb, showing absolutely nominal roll and lean. The steering system has this perfectly heavy weight for better cornering control. Turning could be a bit tighter and on-center feel would be better, but the IS is all about control…which matters when matched with such a fantastic suspension set-up. Braking is superb with excellent stopping power and response in both normal and panic situations.

It also speaks to how much the car is well sorted throughout. It was born for more spirited pursuits.

After all of the celebrations ended and I left the Lipas at their hotel for their final night in the Twin Cities, I took the next day to wrap up with the IS 200t. It wound up at an autocross event at Canterbury Park in Shakopee. Normally, horses would be running there. Instead, were some beautiful cars trying their hand on a tough gravel-cum-tarmac course through the cones. It looked exciting. Perhaps it was inspiration to take the IS 200t out there to see what was going on. It was certainly great to see a few friends out there, taking liberties on the course.

Inspiration is what this third generation IS is all about. The paint color certainly makes this IS 200t F Sport sing. People react to it and love it. In a world where white, silver, gray and black are the norm for cars in this category, the Ultrasonic Blue Mica stands out as something sporty and exciting. It also brings out the nuances of the design of the IS, from its sculpted front clip designed around the Spindle Grille to every line and crease flowing from it towards the rear bumper. The finishing touch is the set of dark gray finished eighteen-inch split five-spoke wheels shod with Bridgestone Turanza tires.

What makes the IS F Sport special is just inside those four doors. A regular IS is fine with comfortable seating and straight forward gauges. Select the F Sport on any IS, and you get the LFA-inspired instrument cluster. The large dial is a TFT screen that is somewhat customizable, flanked by two smaller TFT readouts for temperature and fuel level. A switch on the steering wheel slides the big dial to the right, exposing yet another larger TFT screen for more vehicle information. This is one of my favorite instrumentation setups on any vehicle around. I wished this was on every Lexus model.

The idea of the IS (and the RC coupe – my favorite Lexus of all time, by the way) is to create a true cockpit feel for the driver. Compared to its competitors, the LFA-inspired cabin works better. No need for wood or any other trim. Just straightforward, but stark high quality finishes all around. One thing that I have a quandary about is the placement of the infotainment screen, set far towards the windshield. It is not the placement of the screen, but rather the Remote Touch controller that is necessary to use it. However, it is easier to use than a lot of its competitors and without the insanity of going through a lot of menus to do the one thing you need to do. Considering my experience with other Lexus models, I am used to it.

Another thing about Lexus products is the availability of one of the finest audio systems around – the Mark Levinson 15-speaker system with GreenEdge technology and 835 watts of playback power. It sounds terrific and a must tick off on your order sheet. The infotainment options are pretty good, between HD Radio, SiriusXM, and the Lexus App Suite, where you can playback via Pandora and iHeart Radio. I popped in a CD for an old school feel. The Mark Levinson system gave it a lot of new school quality in playback. Choosing the Mark Levinson system also means getting the Navigation system, which is very good, augmented by Lexus Enform Destinations. One call can get you where you need to go. 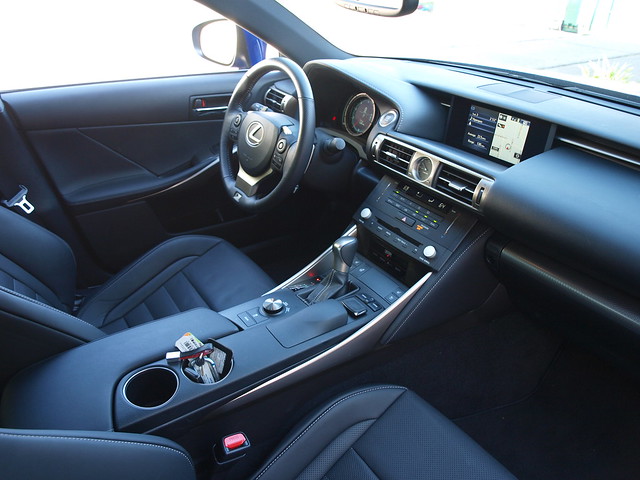 The final piece of the IS F Sport package is in its seating. The bolstering is on point, but it does offer a narrower cushion/backrest area than most sport seating. However, these seats have a way to adapt to your body – which makes things more comfortable behind the wheel. Rear seating is also deep, but not deep enough to sink down too much into it. Rear leg room is fine for average adults. If you ask the Lipas about the IS F Sport's cabin – well, they loved it.

Love is something you have to earn when it comes to automotive ownership and enthusiasm. This was the lesson on my final stop for the weekend. A coalition of car clubs in Minnesota held a meet at the new parking ramp next to US Bank Stadium, the new home for the National Football League's Minnesota Vikings. Considering the weather, the location and the sheer number of participants attending this event, it turned out quite well. You can see there were not only a diversity of vehicles displayed at this meet, but rather the diversity of levels of enthusiasm, "builds" and "modifications."

The lesson here is two-fold. One, is that we need to not hate on those who are trying their hardest to become part of the community, but to rather reach out and mentor those who aspire to become a greater part of it. Secondly, is to keep my own thoughts in check in terms of my own views about the community. The latter is not as easy as one might think – it also signifies a bias. You can't have a bias in this business.

Yet, driving a Lexus has always been a pleasure. With all of the brand's vehicles I have reviewed over the past five years, I have certainly been accused of bias for the brand. What may have been interpreted as professional bias, is really a personal (read: non-professional) love for the brand and its products. Lexus has certainly have stepped up in design, engineering and technology. There is still more to come. 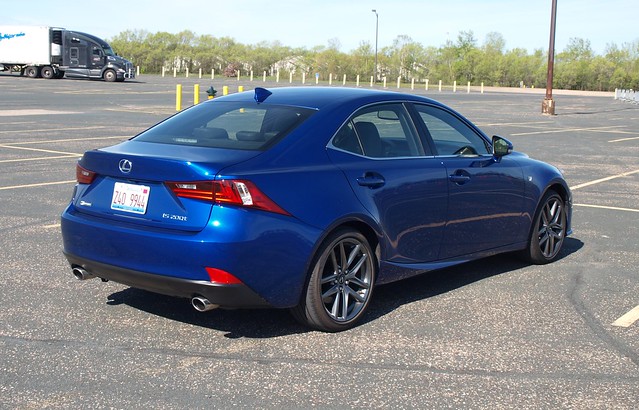 In loving a Lexus, there is a price to pay. A basic IS 200t has a base price of $37,325. This Ultrasonic Blue Mica F Sport example with several packages came with a sticker price of $46,300. Consider that most of it competitors with turbocharged four-cylinder engines would equip their models with about the same level of content for prices that scale up to $50,000. Sometimes for even more money than that!

However, if you really want a Lexus IS with all of the performance and fun that one would want, I would choose the IS 350 F Sport rear-wheel drive model. To get one of those fully equipped, you would expect to face a sticker price of $49,715. For us Minnesotans who require the use of an all-wheel drive system, one must note that by choosing that driveline, you will lose two gears from your automatic transmission. For that privilege, that sticker price goes up to $50,445.

No matter which one you choose, the Lexus IS is a fantastic car. It embodies sportiness without having to go for something high powered under the hood. It excites the senses, regardless of which engine you choose. And, so on…

In all, this was an appropriate choice to celebrate the milestone of five years as Victory & Reseda. After the cake has been eaten, the party favors thrown in the trash and the final congratulations have been handed off, all that left is the memory. That memory was encased in Ultrasonic Blue Mica with a special Spindle Grille and an aggressive stance. That memory was again provided by a Lexus. It was indeed the star of the weekend.