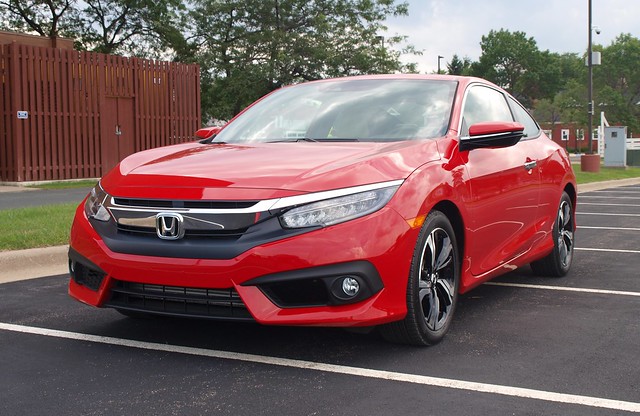 A Victory & Reseda review of the 2016 Honda Civic coupe

I do. When it first came out, it was Honda’s third product to sell alongside the heart-winning Civic and Accord. There was a bit of Sochiro Honda inside of this small sporty notchback coupe – he loved motorsport and wanted the lightest weight possible for the best velocity. The first Prelude was not fast. It was quite aspirational for those looking for some luxury in their sportiness.

There was one Prelude I recalled the most. A high school classmate had one – a new 1980 model in a bronze color. We used to be a part of a club on campus and did a lot of regional and statewide confabs as a part of it. There was one problem, though. I was a big guy back then (still am). Guess who sat in the back seat more than often? I will attest that the Prelude’s redeeming quality was in back seat space. After all, it was technically a 2+2.

There were subsequent Preludes. They grew in size and stature. They also spawned more powerful engines, better suspension systems and advanced technology. Remember four-wheel steering? That was a Prelude innovation.

Five generations of Preludes saw their conclusion by 2001. It was at a part in Honda history that things weren't all that exciting. That is, if you listen to enthusiasts of the brand. Others could care less, as most of the Hondas of that era were heavily modified – right down to their distinctive exhaust noise.

We miss the Prelude. It was the most exciting Honda ever sold here. That is, next to the S2000 and, maybe, the CRX. However, Honda knew it had to sell something that both customers and enthusiasts would aspire for. They needed a Prelude for today's generation. 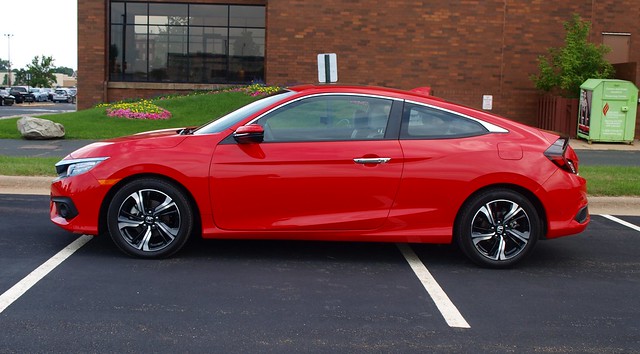 Enter the coupe version of the North American Car of The Year – the 2016 Honda Civic.

Civic Coupes are a frustrating subject to discuss. They were great ideas, when coupes were still selling. Yet, the idea of the Civic seemed lost in a market where four-door sedans were the way to go. Some point out that the Civic Coupe was an idea concocted in Torrance, California for strictly North American consumption. While the Japanese domestic market warmed up to this American Civic, the rest of the world scratched their heads and moved on.

For the tenth generation of Honda's main global product, a North American team was assigned the task to develop the coupe version of the Civic. What they got was not just a mere Civic or something of an afterthought. They developed something better than that.

They might have created a sixth generation Honda Prelude.

Audacity aside, the Civic coupe follows almost every line of the sedan – introduced earlier in the model year. It is sleek, sharp, and entertaining to the eye. The front end is three-dimensional, combined with a low, long, and sleek fastback-style profile. The headlamp units are compelling, with its array of LED lights for both main and driving lights/turn signals. The long doors of the coupe fit perfectly with a more rakish profile, including large rear windows and a spoiler for the creased short trunklid. The crowning touch are some three-dimensional taillight units, finishing off one of the most compelling redesigns today.

The only thing the coupe's top model, the Touring, adds are 17-inch alloy wheels shod on Continental Pro Contact tires. Overall, there is a sense on how much Honda wants to nail their two-door Civic this time around. I get it, completely. It has an air about it that reminds me of my old 1991 Acura Integra. I could say that it might look like a conglomeration of all five generations of the Prelude. It might take some breaking down of the entire body structure to truly find out. 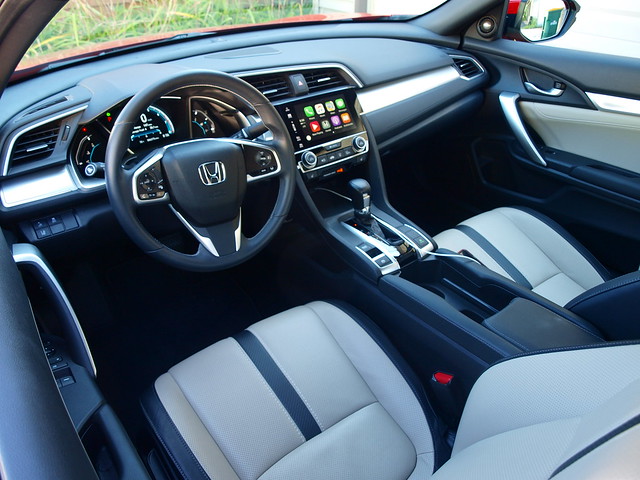 I used to love the Civic until about 1992. Its open and airy cabin was great to accommodate my big body and still engage me in driving. After years of interiors that did not suite me well for engagement, this tenth generation Civic simply nails it. The key word is engagement, especially when sitting back in a sports coupe-like driving position, facing a single-level instrument panel mixed with LED and TFT elements. The center pod houses a digital speedometer, an analog-looking tachometer and information for fuel economy, audio and other vehicle functions. The floating center stack features a good-sized TFT touchscreen for the infotainment system and the climate controls. The center console is higher than it used to be for a Civic, but it has deep cupholders, a short gear lever and plenty of stowage. The USB connection is hidden in the lower part of the front cabin area, with provision to lock in the line feed from it.

The seats are on the small side for the driver’s back, even with a good cushion and bolstering all around. They can be comfortable once it knows who you are. Those with wide shoulders may have some issues with upper part of the seatback, however. With a sunroof, taller drivers may have to adjust accordingly to find a comfortable place behind the wheel. Touring models get perforated leather with two tone accents on the bolsters. Rear seat room is good for children up to average sized adults. That would also depend on who is driving, of course.

The push for this generation Civic is to get back to "simple," even when things are more complicated these days. With a single tier instrument binnacle in place, the single TFT touchscreen for the infotainment system is a welcomed sight for us critics. It is still driven by Honda Link, with available audio playback options of SiriusXM, HD radio, Pandora and Aha. The Touring also includes a good navigation system with great graphics and Bluetooth connectivity. In addition, this infotainment system adds Apple CarPlay and Android Auto connectivity and integration. Ten speakers fill the sound inside the Civic that includes a subwoofer and a 450-watt amplifier.

Power for the new Civic comes in two forms – a 2.0 liter four-cylinder engine and a turbocharged 1.5 liter four-cylinder. The latter is what appears under the hood of this Touring coupe, sporting 174 horsepower and 162 pound-feet and torque. This engine is connected only to a continuously variable transmission, driving the front wheels. Though there is nominal turbo lag from this engine, the CVT is not as responsive, as I like. On passing and on-ramp maneuvers, it does take a bit longer to shift as I would have liked. Otherwise, this drivetrain is great, as it motivates the Civic coupe on the highway and around town. The upside is fuel economy, which I averaged 36.7 MPG. 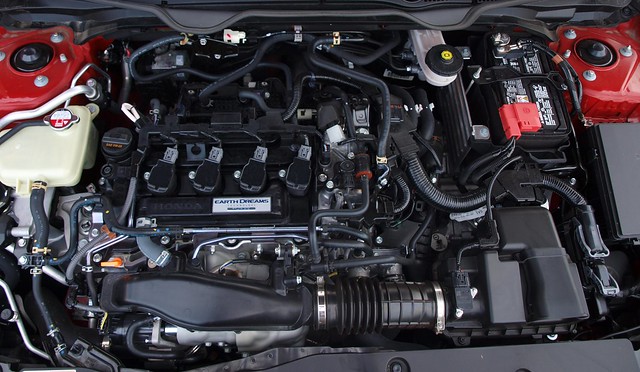 When driving the Civic coupe, you will feel its enlarged size all around. The wheelbase is extra long at 106.3 inches, which offers a balanced ride and improved interior space. Yet, it also feels nimble, partly due to its overall length is at 176.9 inches – short compared to other compacts that have reached or exceed 180 inches. Yet, it is "light" – 2,888 pounds, which may seem a lot, but consider how much cars today have added so much weight due to safety regulations and added electronics. These number do play into a larger picture that makes the Civic coupe pretty desirable.

First off, the handling is quite good. It will run near flat through the curves at speed, though you might feel a lean through banked cloverleaf interchanges. It is a good thing we got the Touring, because the ride quality is well balanced. It is not too harsh nor soft. Just quite smooth and absorbent.

I will say that I thoroughly enjoy the steering system. As artificial as it may be, the thick rimmed wheel is excellent to work with. The steering feel is heavy, as expected in a sporty car. Turning radius is very tight and each maneuver is quick and responsive. Stopping the Civic coupe is also confident inspiring, with great pedal response and excellent action throughout the system. This resulted in solid stops in both normal and panic situations.

There is one point to be made about this Civic Touring coupe: Active safety. Although its predecessors never had features such as Adaptive Cruise Control, Lane Keep Assist or a Collision Mitigation Braking system. Having them onboard is perhaps some peace of mind while piloting this compact coupe. There are arguments for or against offering these features, but consider what Honda (and Acura) used to offer their coupe models – like anti-lock braking systems and four-wheel steering. Remember those? Incidentally, ABS is standard on all Civic coupes these days. 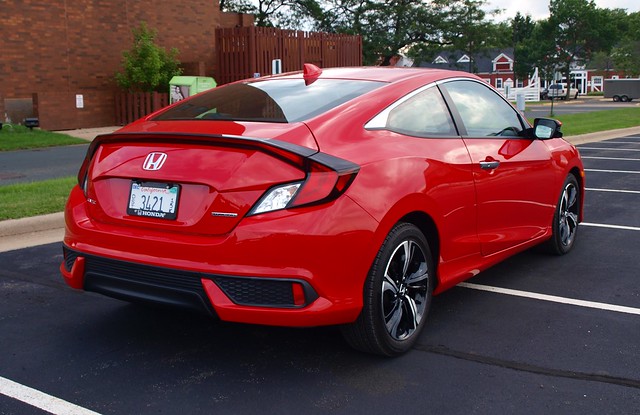 The most basic Civic coupe you can get these days is the LX with the 2.0 liter engine and the six-speed manual transmission. The base price for the model is $19,050. The Touring sits on top of the Civic lineup, the sticker price for this coupe version came to $26,960. If you want a four-door version, the Civic LX sedan carries a base price of $18,640, with the Touring sedan scaling up to $27,335.

By the virtue of the North American Car of The Year nod, the tenth generation Honda Civic has been elevated to a higher level above the competition. Customers have responded resulting in increased sales – a calendar year-to-date increase of 17.6% over last year. What they found was a well-designed car that excites and engages everyone on board. That is exactly what I found, as well. More so, Honda finally found how to build a Civic coupe. It is no longer just a mere two-door Civic, but rather an entirely different car altogether. This is why my colleagues have equated this new Civic coupe with models from Honda's past.

I can wax poetic about the Acura Integra, the RSX and the Honda Prelude. All three represented the best that Honda has ever created for enthusiasts.They all exhibited aspects that Honda used to do with their cars – save for the Civic Si in recent years. This new 2016 Civic coupe is by no means a throwback to the 1983 Honda Prelude or the 1991 Acura Integra RS coupe I used to own. It is the kind of car that can welcome back enthusiasts who were looking for "simple" again. In other words, that feeling one used to have with Honda’s fun-to-drive products from the last century.