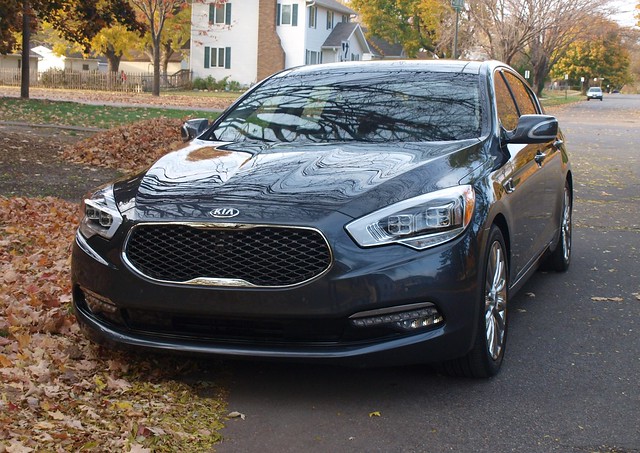 Morpheus offered a choice for us.

During Super Bowl XLIIIX, Kia presented us with their new flagship the K900 with a paean to "The Matrix" film series. By bringing in Laurence Fishburne to play Morpheus again, Kia wanted us to make a choice between the luxury we are used to and the K900. Morpheus could have handed over the blue-tagged key and sent the puzzled couple on its way. Yet, the couple became curious and choose the red-tagged key to the K900.

What happened afterwards would elicit the following reaction from Keanu Reeves' Neo: "Whoa."

Flash forward several months. The K900 arrived to see if that couple made the right choice or not. Certainly, Kia made a lot of promises on how it would change luxury cars. There were some questions on how it would be audacious enough to think it would play with the "blue-tagged key" crowd.

One look at the K900 offered more questions than answers. For example, why does it look like the similarly-sized, less expensive, front-drive Cadenza? That responsibility was on Peter Schreyer's team to develop a flagship sedan for Kia with signature looks towards a commanding presence worthy of its role. Similarities to the Cadenza are somewhat justified, but you need to have a closer look.

The nuances of the K900's design begin with a blunter front end shape. The "Tiger" grille is enlarged to induce an air of elegance that give flagships their personality. The front wheels are pushed to the edge of the car, while elongating the hood to add to its presence. "Portholes" grace the front fenders as an another clue to its upward mobility. The roofline is long, giving more access to the rear cabin through its wide limousine-like doors. The overall look is made even more luxurious with a set of chrome multi-spoke 19-inch alloy wheels shod with Hankook tires.

The rear end provides another debate. While we see Kia's signature nose, we wonder where the rear end came from. One might think it could be influenced by of its rivals – the Lexus LS. Maybe. There is enough Kia badging to distract the rear lamps and its LED lighting.

Perhaps the best part of the K900 is back up front. The headlamp set up is a showcase of LED technology. Each of the four "lights" include four smaller LED lamps inside each pod. Not only do they look distinctive; they emit great illumination outward for better night vision. In other words, these lights work extremely well. 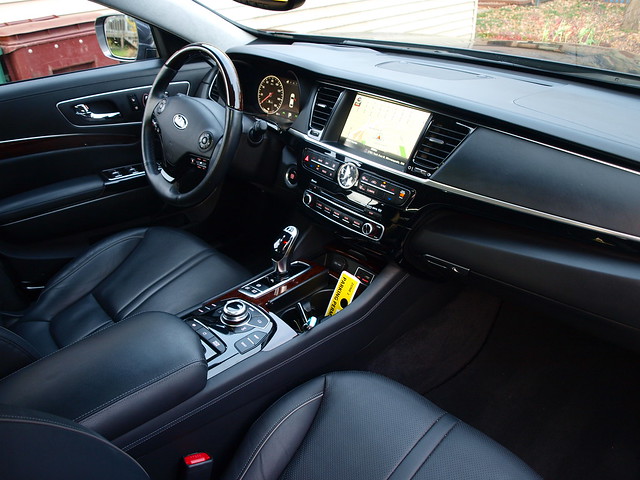 Stepping inside the K900 yields yet another possible comparison with the Cadenza. The instrument panel might look like the aforementioned car, but Kia added some special touches to the K900 to distinguish the flagship over its other big sedan. Not to mention the two-inch width difference between the two helps to give the K900 the advance in creating that additional luxury along with branded features denoting the flagship above all other Kias.

The TFT screen for the instrumentation changes depending on which Drive Mode you are in. In both Normal and Eco, your gauges are in analog. Switch to Sport, and they become digital. It is not a contrived digital readout, but one that helps race your heart a bit faster – and, that is a good thing. Kia also gives the K900 a distinctive steering wheel. It is a huge three-spoke wheel that accentuates the flagship feel of the car. Switches around the car are good to the touch and very intuitive. The toggles on the steering wheel might be a bit tricky, however. They are also intuitive, once you master them.

The 12.3-inch center screen for Kia's Microsoft-powered UVO infotainment system is huge, but not touch sensitive. Controlling these functions are done through a knob on the center console, along with quick buttons to the most common screens.

Front seats are huge – and comfortable. While a lot of flagships want you to get comfortable, the K900 means it. There is a good balance between support and cushion with multiple adjustments from the door panel, not unlike most of its rivals. Expect power lumbar and seat cushion length in the VIP model to ensure that everyone can feel comfortable piloting the K900.

Settle into the back seat and you might as well be in a limousine. Consider that its cousin, the Hyundai Equus, covers that part for the Hyundai and Kia conglomerate with its 38.8-inch rear leg room measurement. The K900's rear leg room measures out at 38.2 inches. Which means that VIP model owners can enjoy reclining rear seats powered by switches from the door panel and a center armrest that will control the climate, the rear power shade, the infotainment and the seat temperature for those who rather live in the back than drive themselves. The rear door comes with manual shades for further protection from the sun and onlookers.

Lexicon provides 17 speakers of surround sound from the 9.5-inch TFT screen up front – and the controls in the rear center armrest. It emits a wonderful sound for everyone to enjoy. A live Morpheus or Laurence Fishburne singing an tenor aria is not included. 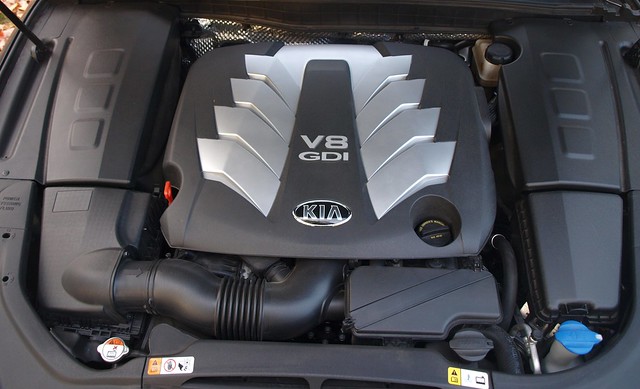 Under the hood of the K900 is a 5.0liter V8. This is not just any V8 – it is the first appearance of Hyundai's Tau motor in a Kia. You have 420 horsepower and 376 pound-feet of torque on tap. Press the throttle and all of that power comes alive, providing effortless thrust that is quick off the mark. It also cruises at highway speeds very easily.

Power is channeled through a new eight-speed automatic that is smooth, quiet and quick. You cannot feel the shifts, but you can see them take place on the tachometer. If you want even quicker shifts, switch the Drive Mode to Sport. Though you will find even nominal differences between the shifts in Normal and Sport. In Eco, shifts are a bit slower, but with no real difference than in Normal. Only the rear wheels drive the K900. It is a good driveline that provides absolute pleasure for leisure and enthusiastic drivers alike.

When driving the K900, you will find it smooth, comfortable, luxurious…all of the words that describe a flagship. You do not feel the cracks and expansion gaps in a K900 due to soft and compliant dampers in the suspension system. Handling is on the soft side through the curves. However, the K900 feels poised to handle winding country roads or tight twisties without complaint.

Ruddering the K900 takes managing a rather large steering wheel with a quick reaction. Though it feels somewhat disconnected, the steering system does allow the front wheels to do tight maneuvers despite being such a large car. Braking is smooth and sure, helped by huge rotors and a strong caliper system. Normal stops were short, while panic stops responded excellently.

The K900 offers all of the active safety features you expect in a flagship. These standard features include blind spot monitoring, lane departure warning, rear cross-traffic alert, parking sensors and an Advanced Smart Cruise Control. Making things easier is a heads-up display, also a part of the VIP package. This is where you get all of the active safety warnings right on your windshield in a logical setup. Instead of looking at the mirrors for blind spot warnings – it shows up on the heads-up display.

While the K900 advertises that it will get 18MPG on average with the big V8, we got better than that. The fuel consumption average under our care came to 18.7MPG with a high of 25.5MPG on the highway.

If there is one concern above all on the K900, it is the price. The main feedback from people who have seen the K900 has been a tough swallow for the sticker price of the car – one with a Kia badge. It just seems that there is still a shock over Kia's decision to sell its flagship sedan in this market. The facts are simple: The K900 Luxury model starts at $59,900. This VIP tester is stickered at $66,400. 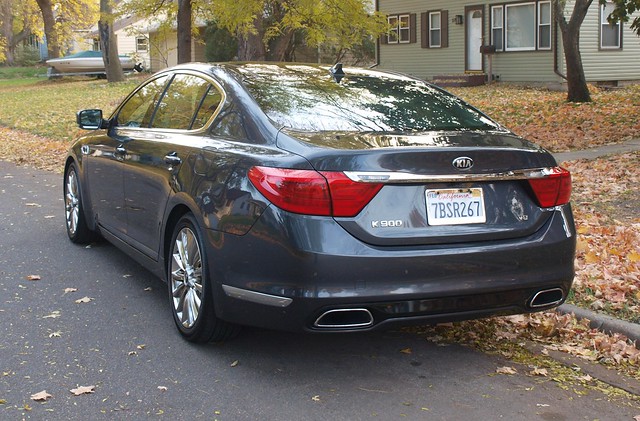 Instead of focusing on the badge, this is a true value among flagship sedans. If one could get the performance of a more expensive and pedigreed model – the Lexus LS 460 and BMW 750i are two such examples – at the K900's price, wo would not pass up such a value? Yet, in this market, price is meaningless – it is about status above everything else.

The K900 is a flagship that shakes up everything you know about luxury cars. However, once you get over the idea that it has a Kia badge, you will find that it is truly the best value amongst luxury cars out in the market. Still, it is the badge that concerns a lot of people who encounter the K900. Many consumers are still conditioned to think that the best Kia they can get is an Optima sedan or a Sorento crossover. It makes the K900 a very hard sell as it shares showroom space with the Soul, Forte and Sportage.

If you are a brand snob, the K900 might not be the flagship sedan for you. However, if you want a great luxury car at a fraction of the finest cars in the world, this might be the one for you.