A Victory & Reseda review of the 2015 Jeep Renegade

The Jeep Wrangler is the gold standard in the SUV world. It started it all, thanks to its heritage of being a war hero.

Jeep spawned a culture of enthusiasts wanting to see how far they can go into the woods, over the mountains and across the desert. The original Civilian Jeep also spawned its share of imitators the world over – each one trying to be as rugged as the original. Back at Willy-Overland, a whole line of Jeeps built off of the original platform were introduced for many different purposes. This tradition continued when Jeep was passed off to Kaiser, American Motors and Chrysler.

However, something got lost in the progression of Jeep-branded vehicles. The rise of the Sports Utility Vehicle gave way to consumer demand for more civilized models. They were no longer off-roaders, as they became softroaders. Even the mighty Jeep succumbed to consumer demand. Though they sold Wranglers that were true to the brand's roots, Jeep introduced the Compass as a way to invite customers to the brand with something that was not entirely "Trail-Rated."

If that made the Jeep faithful a bit nervous about the direction of their brand and its products, let us go back to 2009. As Fiat began to set the course for Chrysler under its guidance, a PowerPoint slide popped up showing Jeep's future product plan. At the top of the list was a subcompact-sized Jeep. You could feel the gasps from those who initiated the "Jeep wave," attended Camp Jeeps and stayed true to the paean of the seven-slot grille.

Perhaps some explanation was needed to calm the fears of the Jeep faithful.

The inspiration of the subcompact Jeep came from Fiat's own work in creating a four-wheel drive subcompact car that became a "farmer's friend" in many parts of Europe and Latin America. The Fiat Panda 4X4 showed that Italian farmers can ford creeks that ran across their property and surveyed the land in a boxy hatchback. The system they used was extremely capable – and shockingly solid.

It was possible to create a small Jeep to have the same capabilities of the Fiat Panda 4X4. Yet, it also needed to have at least some Trail-Rated qualities for Jeep enthusiasts to play with it on American soil. However, Fiat Chrysler Automobiles envisioned the new small Jeep was a global product to be sold in many places where Jeep was just a name and a photo on the Internet. 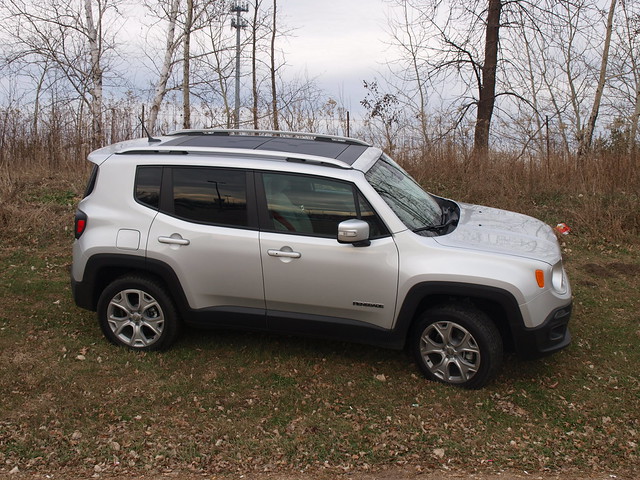 This new Jeep is now a reality. The 2015 Renegade arrived from its plant in Melfi, Italy, making this the first Jeep sold in its home market – the United States of America – produced in Europe. I had to see whether this is indeed a real Jeep.

Let me say that I was a bit skeptical when the Renegade was introduced. How could this win the hearts of Jeep enthusiasts and their Wranglers? Could this follow a Wrangler or Grand Cherokee deep into the woods? These were questions I had to keep in the back of my mind when a 2015 Limited 4X4 arrived for my evaluation during Thanksgiving week.

At first, you are presented with a boxy-looking body with the requisite seven-slot grille, round headlamps and an upright rear end. It certainly looks like a Jeep. The raised ride height also tells me that it could also be a Jeep. Then again, how many times had we been fooled that something so masculine looking could be as capable as its image tells us?

There are some key positive points to the Renegade's exterior. The doors open wide enable a big dude like me to take my seat anywhere. The tailgate opens upward for me to clear my head as I am loading the cargo hold up. It obviously works as a Jeep, so far…

Then comes the details. The Limited's "luxury" look might fool some people. It looks nice, but some customers would rather have a bit more Jeep-ness in their Renegade. It does come in three other models: Sport, Latitude and the desirable and trail-Rated Trailhawk. Honestly, any Renegade will do the trick in being an affordable and fun Jeep to play with – and looking the part.

One thing you will find in every Renegade are a bunch of "Easter eggs." This is a term for brand identity detailing that Jeep loves to do with most of its vehicles. Practically everywhere you look – in the door, inside the taillight housings, on the MySky roof panels and on the glass – you will find various Jeep branded icons that one might think it is kitschy. Actually, they're quite fun. It adds personality to the Renegade – which it is certainly full of. 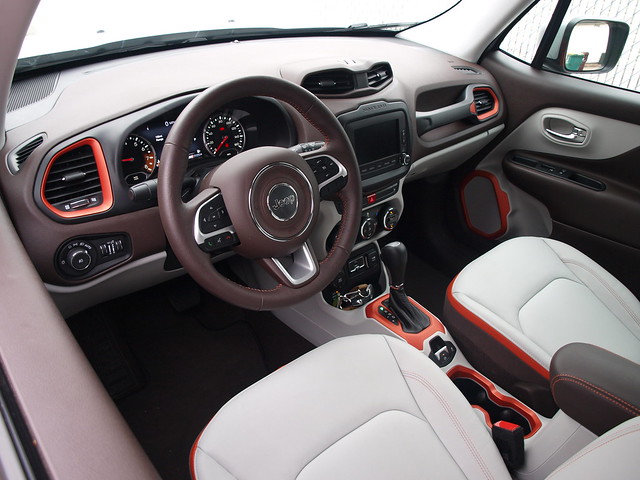 That personality continues inside the cabin. My tester came with an interior color scheme of orange, brown and a light Ski Gray shade. Again, one might think this is a bit kitschy, but it is not. It absolutely works with the Renegade, especially in leather for the Limited model. If you do not wish to be flashy, you could always select a black interior.

This combination in color is on point, especially when it translates onto the seating. Front seats are very comfortable with plenty of adjustments for rake, height, recline and lumbar. Rear seat room is very good for its size. The main point all around is head room, which there is a lot of. The doors open wide for excellent access into the cabin.

Two dials frame a customizable TFT screen in one of the best instrument binnacles in its class. Readout are straightforward and easy to decipher, while perfectly framed within the steering wheel. Speaking of which, that is a great steering wheel – thick-rimmed with a right-sized hub and tactile switches that are easy to work with. The center stack is crowned by the UConnect 6.5 screen that includes navigation, SiriusXM radio and other audio functions. Climate switches appear just below the UConnect screen and are easy to work. This also includes a good center console starting with the traction management switches (read: Four-wheel drive), the familiar quick shifter for the automatic transmission and other various controls and cubby holes. In all, the Renegade offers the best cabin in its class without question or argument.

There was an added bonus to the Renegade Limited that I did not get a chance to fully check out. This model came with the MySky Fixed roof panel system. With a special key, you can remove the front and/or the rear panel and stow them in their own bag in the cargo hold. With the panels removed, you get the sensation of letting the sun in. Pretty clever this MySky system is. 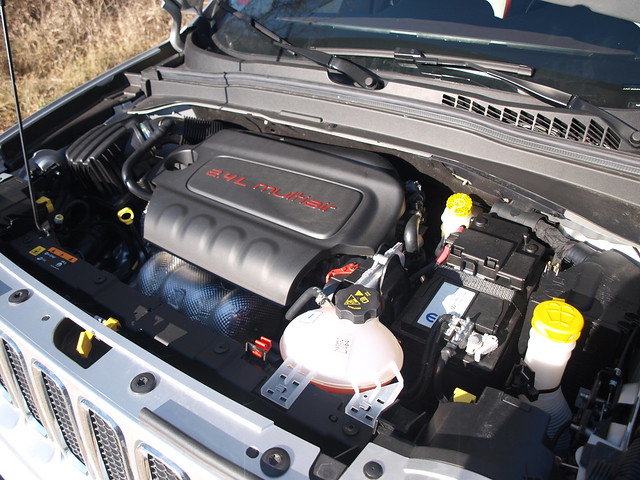 Jeep offers the choice of a turbocharged 1.4 liter Multiair four-cylinder engine or the 2.4 liter Multiair II "Tigershark" four-cylinder engine. Manual drivers with get the 160-horsepower turbo while automatic customers get the larger 180-horsepower engine. My tester had the latter, connected to the nine-speed automatic transmission. In the past, I had mixed experiences with this ZF-designed FCA gearbox. In my tester, all's well as it shifts exactly as it was supposed to be – silent, unobtrusive transitions. However, I still contend that it has too many gears. Perhaps it does.

Because the Renegade is a Jeep, there is an expectation that it will have a solid four-wheel drive system that is highly capable of proper traction management. In the Trailhawk, the Renegade is offered with the only 4-Lo ratio available in this class. The two-speed transfer case also has traction type selector and hill decent control. The Limited tester only had a single-speed transfer case, with a few twists. You can still select a terrain to work with and lock the axles for optimal four-wheel drive action. After doing some trail and snow work, one conclusion must be made that no one should question the Renegade's capabilities at any rate. This small and mighty vehicle can get through a lot more than you think.

It should not be a surprise on how smooth the Renegade rides. Not to mention how much quieter it is than its competitors. It handles pretty good on-road, even through the corners. The roll and lean is kepy to a minimum. There is also a good turning ratio on the Renegade, with great response and reaction form the wheel. On-center feel is tight and solid. Brakes are also fantastic with great stopping power in normal and panic situations.

One thing that did not surprise me was fuel economy. Given it is a 3,126-pound small four-wheel drive SUV, the 25.1 MPG average figure was somewhat expected. I was hoping for better, but, again we need to be realistic that this figure is actually right where it should be for this kind of vehicle. 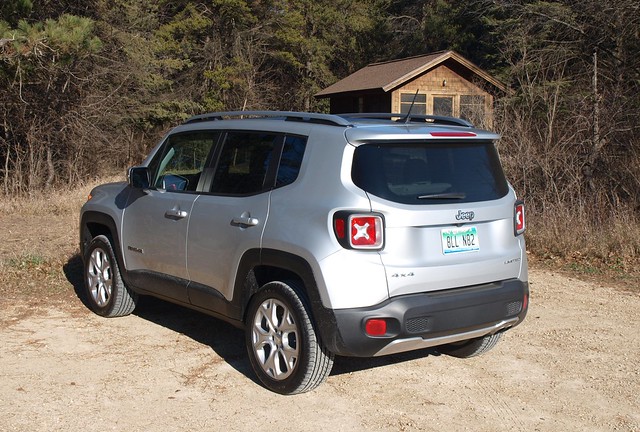 The Renegade Sport with front-wheel drive and a manual transmission has a base price of $17,995. Sounds like a great value, right? That is until you start looking at the higher models, such as this Limited tester. The sticker price to this test vehicle came to $31,120. I thought that was well above what one should pay for a Renegade. That was when I began pricing out a similarly-equipped Trailhawk, finding myself looking at a sticker that was another $1,200 more than the Limited tester.

Would you pay $32,000 for a Renegade? Have you seen how much Wranglers cost these days? Or, the Cherokee Trailhawk?

Given the added bonuses of the Renegade, there is no denying its place in Jeep's history. As down to Earth as this Italian-built subcompact SUV is, it has the capability to play where Wranglers and Cherokees have passed through. Even the non-Trailhawk models can play off-road as it can find itself through farm paths or the path to the cabin deep in the woods.

In today's changing vehicular climate, the Renegade is a Jeep for now.