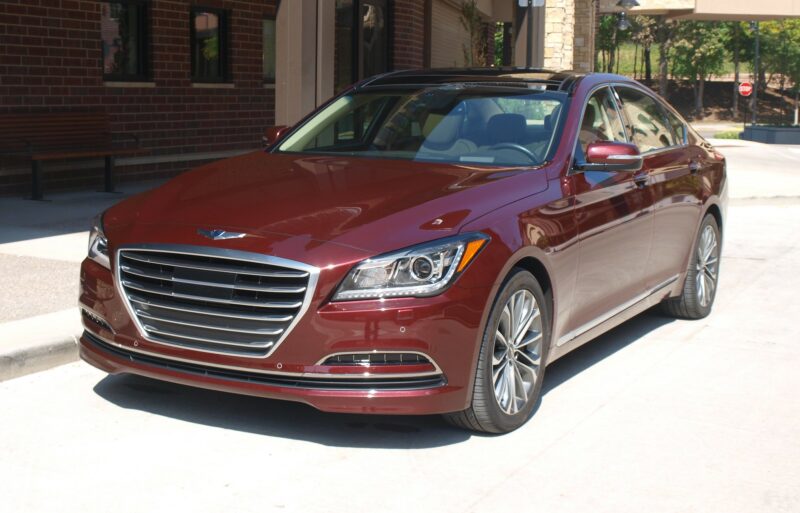 A Victory & Reseda review of the 2015 Hyundai Genesis sedan

No, I should not use musical metaphors in my review.

But, I am going to. It is because of this car. The name. It evokes anger with Top Gear's Richard Hammond. A tool for Jeremy Clarkson to use, if he is not reported in some tabloid for some remark he made otherwise.

Still, the name. Not in the biblical sense, but in a context that made a drummer replace a future curator of world music as its lead vocalist. It was a single move that took the prog rock band into mainstream Album Oriented Rock. Otherwise, would they not made hits and sold millions of copies of records to solidify their future?

Just like their musical namesake, Hyundai took a new turn on their premium sedan. The first effort was fine, but it needed to stand out more. They employed the next generation of their Fluidic Sculpture design language and integrated onto its rear-drive platform.

Now, you can see the new Hyundai Genesis sedan from afar, just as you hear the first notes of "Behind The Lines/Duke's End" leading into "Turn It On Again" – that is, if you attended a Genesis concert during their heyday (or reunion tour). One could call out a design piece that could be similar to a competitor, but that would miss the point. That blunt front end is a calling card, especially when the rest of the segment requires one to be distinguished from the other. It is not even anonymous – one should refrain from calling it such. If you do not recognize it as a Hyundai Genesis sedan from first sight, then you will indeed miss the point of this car.

Where the Genesis becomes distinctive is in the details. The winged badge and Genesis logotype is more prevalent than the Hyundai logo in the back. At night, you are greeted by the winged logo as you are about to step into the car – emitted by a silhouette from the underside of the mirror (or door). The 3.8 model wears eighteen-inch rubber with a nice set of alloy wheels to finish off the look.

Stepping inside already presents a luxurious atmosphere. From a distance, there is enough luxury to entice five passengers. The front seats are large and offer multiple settings to get comfortable, including heating and ventilation. Rear seat room is excellent for three adults, as long as the middle seat occupant can straddle the transmission tunnel without any discomfort. Rears seats also offer big comfort for the outboard passengers and some privacy with retractable shades on the door and the back window.

In luxury comes a complete instrument panel. The two dials are complemented with digital fuel and temperature gauges. A large TFT screen is switchable to show trip, fuel consumption and vehicle setting readouts. This model had a head's up display offering the best and most logical graphics to train the driver to concentrate on the road. Though some might think some of the switches and stalks may be form lesser Hyundai models, they are not. In fact, the tactile quality has improved on these switches from the prior generation Genesis sedan.

The center stack starts with a sizable touch screen for the infotainment system. Behind it are a plethora of audio options from SiriusXM to a music file hard drive called the Jukebox. Lexicon offers 14 speakers of pure sound through its Discrete Logic 7 surround sound enhancement – perfect for listening to either Peter Gabriel or Phil Collins. To keep you connected, you have Bluetooth and BlueLink, Hyundai's telematics suite. The 15.3 cubic feet trunk is available with a self-opening feature when the key fob is detected. If you have no hands free to open the trunk, that feature will come in handy.

The Genesis sedan comes with a V6 and a V8 to power this big sedan. This tester had the 3.8liter Lambda V6 with 311 horsepower on tap. A buttery smooth and quiet 8-speed automatic transmission transfers power to a new all-wheel drive system, HTrac. This is the first all-wheel drive application on a Hyundai passenger car and is only available with the V6. This combination actually works really well.The entire driveline is so quiet and unobtrusive, it makes driving the Genesis sedan a true pleasure.

As with most premium cars, the Genesis adds a set of drive modes to make your drive a bit more fun. Sport mode sharpens up the throttle response, transmission gearing and steering feel. However, steering feel is also sharpened in Normal. This is part of an active safety suite and truly works with you to keep the Genesis on the road. One feature in particular, Lane Keeping Assist, works the steering box to make sure you do not wander in another lane and into the car next to you. Between the head's-up display and the actual active safety features, the Genesis is perhaps one of the truly safer cars out in the marketplace.

On the road, it is a smooth, soft and well-tuned sedan. The Genesis sedan behaves well on any piece of road – straight and curvy. Powerful brakes take care of business on normal and panic stops. Though it has great reaction at the wheel and a good turning radius, steering feel seems a bit artificial. The steering system's Sport mode behavior comes on in Normal when it detects that it is within a lane – which offers mixed results when keeping stable at curves. It also serves a function within the active safety suite of the Genesis sedan.

In terms of fuel economy, it did come as a surprise that it got a 21.8MPG average. The stated average on the sticker was 19MPG, but the Genesis sedan is capable of even better fuel efficiency than advertised. Unlike most premium sedans in its class, the V6 Genesis sedan takes regular unleaded.

Pricing is what you would expect from the Genesis sedan. The rear-drive V6 model starts off at $38,950. This loaded HTrac tester came with a sticker price of $52,450 – on the average an $8,000 savings from its immediate rivals with similar equipment and driveline. If you wish to opt for the V8 model, the most you would pay for one is $55,700 – still a bargain amongst its class.

The real bargain here is the fact that Hyundai stepped up the Genesis into an area they are trying to make inroads in. The first Genesis with its original lineup made us think as to what Hyundai was doing in this class. The new one has more mainstream appeal – or, one would hope.

In essence, this Genesis sedan hits all the right notes – just like Phil Collins, Mike Rutherford and Tony Banks has for its namesake. As the song goes: "Turn it on again!"