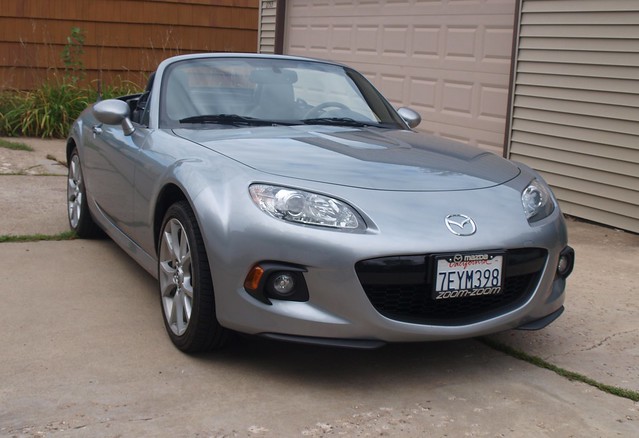 Twenty-five years later, this car defined what a roadster should be.

When Mazda unveiled the next generation MX-5 Miata, a few bullet points popped up that solidified this car's legacy. It is the best selling roadster ever. Mazda sold more MX-5 Miatas than any single model British Leyland could muster – in particular, the MGB. Clearly Mazda outsold the Alfa Romeo Spider and the Fiat 124 Spider.

Mazda also claimed that the MX-5 yielded more race entries than any roadster ever. In the current context, my morning at Brainerd International Raceway was evidence of this claim. No matter if you were a SCCA Pro Racing team or a club racer, the MX-5 was present as a weapon against all comers.

There is a claim I did not see. Twenty-five years is a long time to produce a single model, even through a few generations. Fifty years is a huge milestone, given the legacies of the Ford Mustang and the Porsche 911. I had to do some research to make sure if the claim of being the longest running roadster could be made. The MGB ran for 18 years, as was the Triumph Spitfire. The MG Midget was made for 19 years, as was the Fiat 124 Spider. However, the Alfa Romeo Spider had a production run of 31 years. Sorry, Mazda, you got six more years to claim that milestone.

The first one is plainly obvious: Has the basic "Jinba ittai" concept held up over time? It certainly has. The NC's gaping mouth with fixed headlamps is an evolution of the original Miata. It gives the MX-5 an identity that is unique, as the car itself. A long hood stretches to the windshield with small doors that open wide for anyone wishing to ride this car. The rear end is not exactly short, but it allows enough space for roof stowage and a small trunk. The trunk lid opens high for 5.3 cubic feet of space for a couple of bags for the weekend.

This tester came with a power retractable hardtop in the Grand Touring trim. When the roof is down, it folds into its own compartment between the cabin and the trunk. It takes about 15 seconds for the roof to retract into this compartment, as well as for it to come back up. When it does, it creates a racing look covering the cabin perfectly. The Grand Touring model adds seventeen-inch alloys to complete this look. 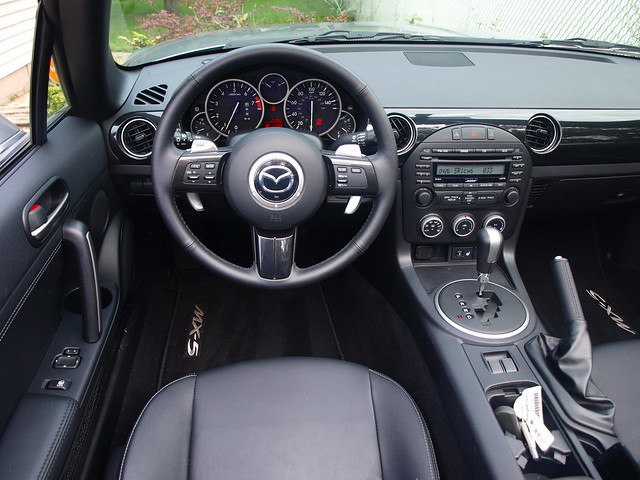 Next on the agenda is also obvious – that is, if you have met me in person – is it comfortable? Once the leather seats "knows" you well enough, it certainly is. The seats are firm, but are bolstered enough to keep you occupied. Taller drivers may have a few challenges, such as headroom when the hardtop roof is up and having the windshield cut off at eye level when the roof is down.

It really does not matter. The optimal experience is with the roof down. You have open sky above and better comfort for everyone. The instrumentation is analog and comprehensive – including an oil temperature gauge. Switches are just fine and are basic. There are a few twists to the MX-5. To open up the gas compartment, the switch is located in the small storage cubby in-between the seats towards the rear.

With either the roof open or closed, there is plenty of entertainment to keep you going. It starts with an audio system that features satellite radio and Bluetooth phone connection. Bose provides seven speakers of sound throughout its small cabin. You also get air conditioning and heated seats in the Grand Touring – both will come in handy for this all season roadster.

Perhaps this question should not be asked, since one would make huge assumptions one way or another: How does it drive? It is the most amazing car one should drive. There is a complete sense of purity that combines raw power, immaculate handling and steering and a ride that is balanced and unexpected from a roadster. 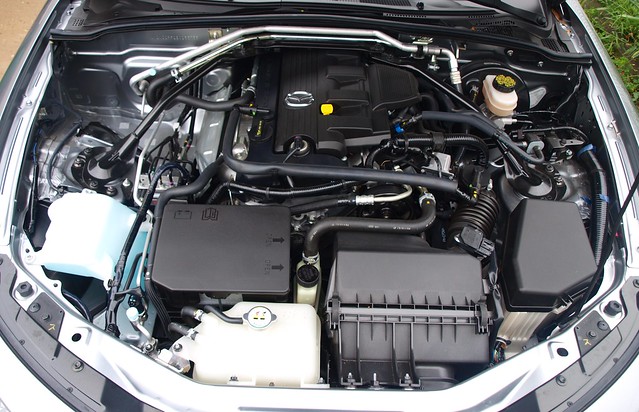 It starts with the MZR 2.0liter four-cylinder engine. It will rev to the redline with the perfect note coming from its exhaust. If you have this connected to a six-speed manual, it offers up 167 horsepower. In our tester, it came with the six-speed automatic transmission and an output of 158 horsepower. With either transmission, the MZR only has 140 pound-feet of torque.

Regardless of transmission, the best way to describe this engine is "alive." The power-to-weight ratio helps in getting the MX-5 the best possible performance in every situation. Power is sent to the rear wheels on all MX-5 Miatas.

If you have never driven a MX-5 Miata, you are missing out on something special. The way it handles corners is amazing. It does so without any roll or lean – completely flat out. The steering is sharp and will go exactly where you point the MX-5. Steering effort is exactly and on-center feel is perfect. Brakes are sharp and reacts well in normal and panic situations.

The biggest surprise about the MX-5 is its ride. One would expect a firm, jarring ride from a sports car. Not at all. It is comfortable, compliant and absorbent. The way the suspension handles cracks and bumps is astounding. There is true balance between ride and handling in the Grand Touring MX-5. 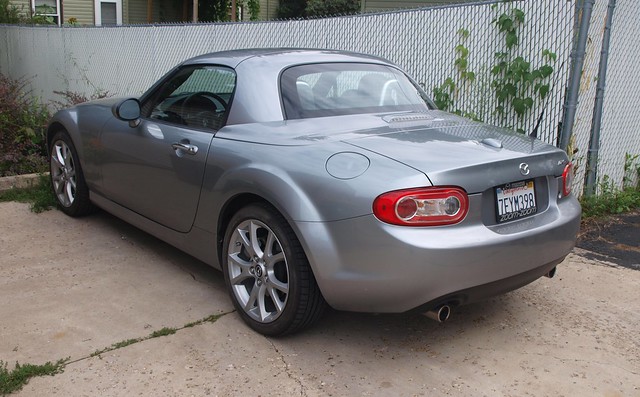 To get into a MX-5, all you need is $24,765 for a basic Sport soft top with a manual gearbox. This Grand Touring power hardtop sits at the opposite end of the MX-5 spectrum. As equipped, this example stickered at $32,735 equipped with the Premium Package.

There is one final question to be asked: Why has it taken so long to drive one of these? They have been around since 1989. Sure, I have ridden shotgun, but who was I so hesitant before getting into one until now?

Size. I was a much larger man then. I tried fitting myself in one to mixed results. Now, I could not only drive one, but enjoy every minute of it.

The key to the Mazda MX-5 Miata is understanding the payoff in owning one. It is the kind of car you drive when the sun is out and a road happens to call. Once the top is down, everything is released. There is no work stress, no family strife, no trolls on your social media accounts – just a smile on your face. The MX-5 Miata quenches your want of freedom and happiness.

That is why Mazda created the MX-5 Miata so long ago. As their hashtag says, #LongLiveTheRoadster!