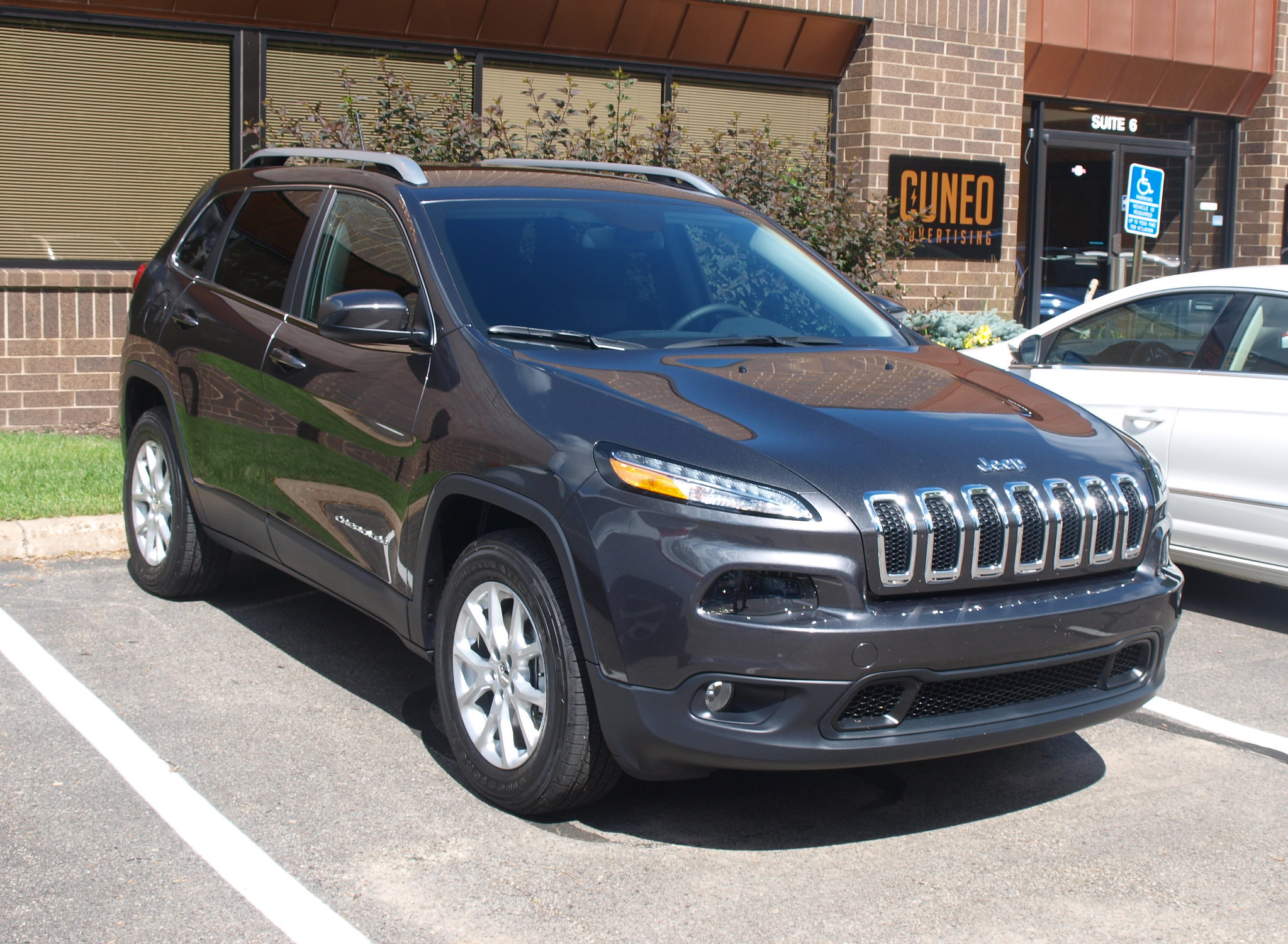 For the most part, the new unibody SUV riding on a Fiat-developed platform has delighted us with rigidity, space and agility. It proved that it is a Jeep, despite its nose. Rather, because of it.

We have grown accustomed it its face. Curious posers and scrutinizers alike wanted to break down the Cherokee's front end clip to see why it was chosen the way it did. Some might say that the "angle of approach" has a lot to do with it. Others think that some Italian from Fiat may have provided that sketch to Ralph Gilles (yes, he is still Senior Vice President of Design in Auburn Hills) without anyone noticing.

Who cares? The Cherokee has been a winner for Chrysler. Sales have been strong in both retail and fleet. It has been getting cred from Jeep enthusiasts, thanks to the rock-hopping Trailhawk model. IN all, there has been a lot of love for the Cherokee on many fronts – the name’s return to this market, notwithstanding.

The new jeep Cherokee is pretty good. The last one I drove was a Latitude model with the 2.4-liter Tigershark/Multiair II engine. It was fine. It could use more power and better engagement form the nine-speed ZF-designed automatic. Then again, that was an earlier model and I am just nitpicking.

Now, another Cherokee Latitude showed up. This time, it had something a bit more special under the hood. It would answer my call for performance.

That would be the Pentastar V6, sized at 3.2liters in displacement.

The 3.2liter Pentastar is a curious case. Chrysler applies its larger brother – the 3.6liter Pentastar – under a lot of hoods across the company. With a power range of 270-310 horsepower, the big Pentastar can be called to haul loads, families and ass according to its chosen application. The smaller V6 is right sized for Cherokee with 271 horsepower on tap. That should be enough to tow up to 4,500 pounds, get out of snow banks and cruise to some unknown destination with three of your compatriots.

The same nine-speed automatic is attached to the new V6. Because this is a later build, shifts have improved and match upwards after initial take off. There was some torque disagreement from a standing start, especially when entering freeways or at stop lights. The transmission sorted itself out beyond the lower gears, giving crisper shifts through key parts of the range. The real star is the V6 and its ability to keep the Cherokee motivated everywhere it roamed. For performance and off-road capability, the V6 would be my choice.

There is some good news about the V6 – fuel economy. In my time with this Cherokee Latitude, I managed an average of 24.8MPG – that is pretty good for a crossover of it s kind with a V6.

This round with the Cherokee will not yield your typical evaluation and review. It has been assigned a few tasks to prove that, yes, the Cherokee would be a great companion to "live free."

Living "free" is not exactly what I had in mind with this Cherokee. As a hard-working automotive writer, it had to be with me on the job – whether the job is not sitting in an office or at home.

First stop, the All-Star Game. Yes, the Major League Baseball one. It was held at Target Field and, since you may or may not care at all, featured Derek Jeter in his last appearance in the midsummer classic, a monster Mike Trout picking up RBIs like no one else, Miguel Cabrera and Max Scherzer making Detroiters proud, and stellar innings pitched by Clayton Kershaw and Zack Grienke.

I was not there just for the game. I had some work to do. The Cherokee remained secure in a hotel ramp (that is what we Minnesotans call a "garage"), while I was gallivanting with my group of media and OEM representatives between the T-Mobile Fan Fest at the Convention Center, a dinner by a highly touted restaurant and the game itself. The game was good. The event was fine.

The weekend came, and I had devised up an outing with some fellow car lovers. It began with a 64.9-mile morning run up to a Cars & Coffee event in Waite Park, next to St. Cloud on Saturday. The plan was to have a few folks meet up there, and then take a 75.7-mile drive through the countryside down to Excelsior.

The hosts for the Cars & Coffee – Audio Video Extremes – were terrific. A small nix of cars was there, including three second-generation Pontiac Firebirds. I was not certain if that was a foretelling of the news to be released later that day of James Garner's passing.

The cruise was good. I received great feedback on the temper of the cruise and the fact that our small group of five vehicles did stick together for most of it. Our reward was a good restaurant in Excelsior – The Suburban. The one thing I know about this small city on the south shore of Lake Minnetonka – this is car heaven. From the 10,000 Lakes Concours d'Elegance, a bi-weekly impromptu classic car show, a great car repair shop where you could see some classic metal on the lift or outside the repair bays to any random sightings of the finest – this is a great car community. A fitting end to a good cruise, I believe.

Sunday brought an assignment to my doorstep. The managing editor at one of my outlets I am published in asked if I was willing to take photos at an event in Rochester. That is a 92.0-mile trek, which I am happy to do. I have done this event before and did not plan on attending. It is a gig – the Cherokee and my camera were ready.

This was not my first time covering Rochester PrideFest. It was my first time seeing physical resistance to it. That was not the story, mind you. It was seeing how much progress this city has undertaken in the past two years. It was witnessing Rochetser having its own coming out party from the time when the Marriage Amendment was fought on its streets. Since then, the festival grew with a small portion of the street blocked off for better access to either side of Peace Plaza.

My yield of that day was 71 photos for Lavender Magazine. Not sure how many will published online and print, but it was worth the trek to work another event as media.

While in-between these adventures, the Cherokee dutifully took me to the office and back. The 13.8 mile commute seems pretty straightforward, except during traffic tie-ups. Within the two poles are various "back-up" plans – something devised from my earlier days in Southern California. If The 405 (San Diego Freeway, I-405, etc.) was backed up over the Sepulveda Pass, I would take Beverly Glen over the Santa Monica Mountains, or something along those lines.

My Robbinsdale-Bloomington commute will take me through Minneapolis, Edina…any old city street would do. You just have to pick the right route and mix it up. I cannot give my secrets away as to which alternative works best at 4:30 or 5:30PM. Somehow, I will get home – whether it takes city streets or a combination of it and a freeway. Of course, it is not worth its moments of entertainment, thanks to Construction Season. I lost count on how many closures and reduced speed zones I had to navigate throughout the week in the Cherokee.

Then again, I have seen my fair share of construction zones in five states already this summer. Probably best to keep quiet here before inciting a riot online…

One thing to consider about the Jeep Cherokee is the fact that it competes against some of the most popular utilities in the marketplace. Only a few in this segment offer a V6, and the Cherokee remains the only one with true off-road capability. But, you already knew this. That is why you asked a lot of questions about this Jeep.

This is also why I put the Cherokee to work. Certainly it is to prove its worth out in the wild. It is to also answer the question of whether the Cherokee would be competitive enough to run with the likes of similar vehicles in its class. That answer is a simple "yes," with hopes that it will work out its few kinks to get it close to perfect.

You have to give Fiat and Chrysler credit for the Cherokee. For the second time, it has shown that giving us a different kind of face does not detract from what it would do. The Jeep Cherokee is primed to do a lot.

Now, about that debate…