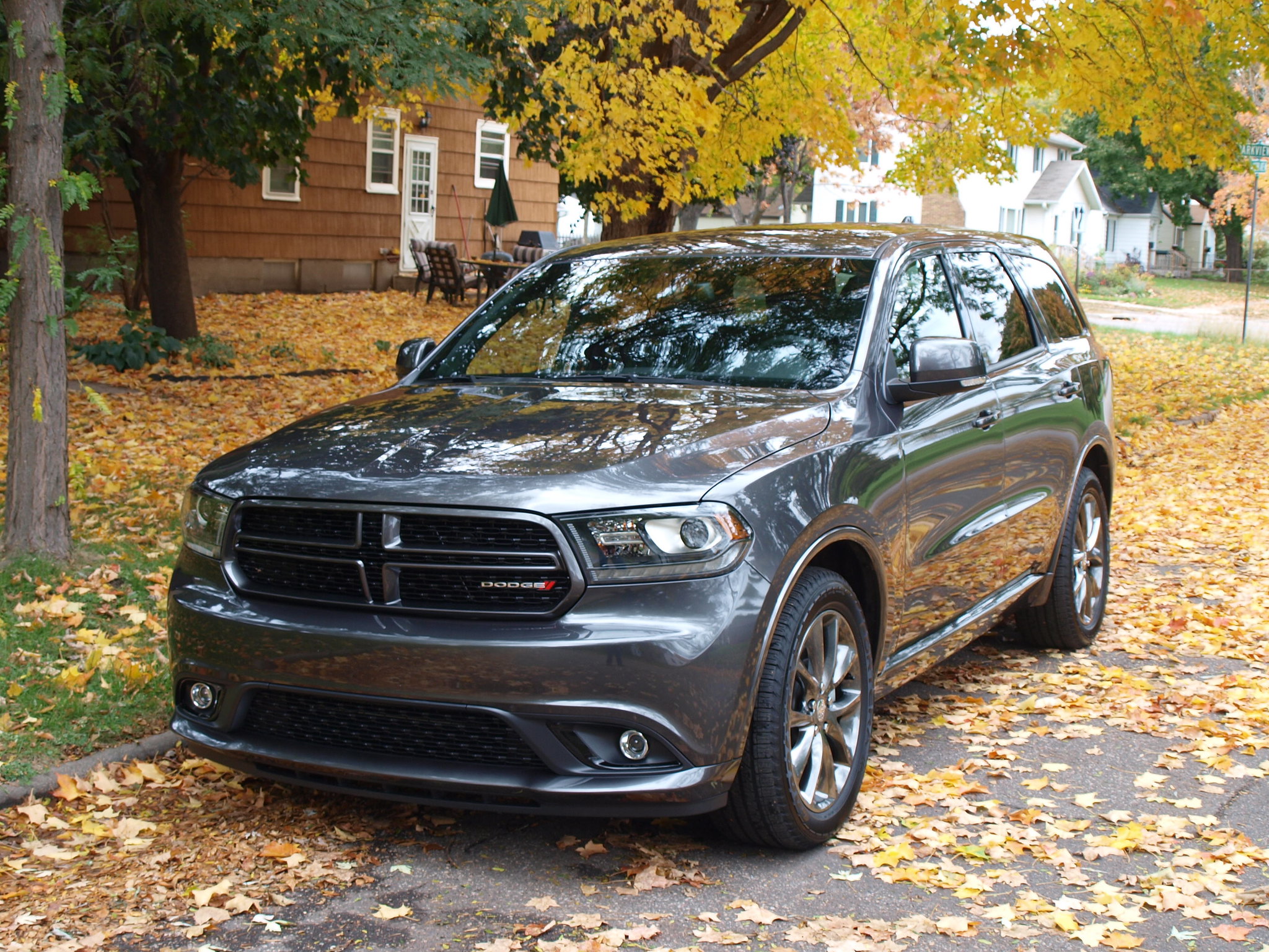 You have seen the commercials, right? The ones where Will Farrell reprises his role of San Diego's greatest television news personality Ron Burgundy?

Your comments have been wide spread from "high-larious" to plain "stupid." Fine. We cannot agree with our gut reaction to the red-suited 1970s anchorman character now the spokesperson for the 2014 Dodge Durango.

I will give Chrysler Group's Marketing chief Olivier Francois some credit for this. It was his idea to tie in the sequel to "Anchorman" – starring Farrell as Burgundy – to the reboot of one of my favorite vehicles from last year. My opinions of the original movie aside, you have to at least give Francois, Dodge's advertising agency and Paramount Pictures some credit for tempting us to guffaw at Burgundy's presentation of the revised Durango.

Want proof? I will admit giggling insanely to the commercial where Farrell/Burgundy demonstrates the space of the upper glove box. Burgundy claims that the glove box would hold up to “70 packs” of gum. In seconds, sticks of chewing gum start flying out of the interior on the front passenger side. Farrell/Burgundy ends his excitable rant by proclaiming: "Is this a gumball machine? NO, it's a Dodge Durango!"

Sure, it is not a "gumball machine." There is more to the Durango than the .1 cubic feet of glove box space or the two turkey sandwiches Farrell/Burgundy claims it could also hold. Farrell/Burgundy did mention the 5.7Litre HEMI V8 – another commercial focuses on a comparison between the Durango and a horse in that respect.

Again, there is more than just a movie sequel advertising tie-in that makes the Durango.

The arrival of the revised 2014 Durango prompted it's own sequel for V&R. In June of 2012, I drove the current generation Durango for the purpose of some work with another outlet I write for. It was a red R/T with the aforementioned HEMI V8 and abundant interior space. It was also the first (and only) video review subject that V&R put together. With all of this significance, I walked away from the 2012 Dodge Durango R/T with a huge smile on my face. Yes, I absolutely loved this big three-row crossover/SUV.

In this reprise of its role, the 2014 Dodge Durango R/T returned to V&R HQ in a different color – Granite Crystal. The color was not the only thing that was different, however. The grille and its crosshairs got bolder, LEDs adorn a new set of headlamps and the rims got really aggressive looking.

The biggest changes in the Durango can be seen immediately. Out back, a full-length tail lamp with LED surround changes the overall nature of the beast. The design was originally brought back onto the current Charger sedan, that late 1960s look is unmistakably Dodge – something the brand sought to rediscover in light of its 100th anniversary this model year. When the LED surround lamp lights up, the first reaction is fear. You would not want to pull up to the rear liftgate of this baby.

Step inside for another huge change. The dashboard had been remade to incorporate two TFT screens. The first one is right in front of you – the speedometer. In the R/T, you have the option to change your readout from the type of speedometer you want to the kind of information you need in front you. You could use the buttons on your steering wheel to scroll from one screen to another. The Durango becomes the latest Chrysler product to utilize this type of screen for its vehicles – including the Dart, Jeep Grand Cherokee and Ram pickup line.

The second TFT screen is even more important – the 8.4-inch UConnect Touch. This is where infotainment, climate control and navigation meet through touch screen buttons, various screens – including the rearview camera. From a red background with an image of the Durango, everything you need is right within touch – a huge improvement ergonomically from past Durangos.

On the rearview mirror are two new buttons to Chrysler. These tie in with UConnect Access, Chrysler's telematics suite. Just like similar systems, two buttons are available for emergency situations, roadside and navigation assistance. These days, you might want to consider a vehicle with such services. As proven with OnStar, having another eye on your vehicle is a good thing. Chrysler's UConnect Access is something to explore even further.

There is one more huge change for the Durango. It is visible by the dial on the console near the center stack – one with the letters P, R, N and D. That dial connects you to the new ZF eight-speed automatic transmission. It is not only the smoothest and quietest transmissions around, it is considered the best these days because of its operation. To get the most out of the ZF eight-speeder, there are two paddle shifters on the steering wheel to play through the gears. Either way, you will find shift transitions to be buttery smooth.

While all these changes are great, the business of driving the Durango remains the same. It is big, just as I remembered it from last time. It simply drives "big."

Perhaps the most intoxicating part of the Durango R/T is, of course, the HEMI. We could argue over engines throughout this site, but I am believer in V8 power that roars when you put your foot down. It is that noise and the immediate reaction inducing that roar that makes the world a much better place. It says to the sustainable ones to simply "get out of my way!"

Of course, here are two more points to be made here. My average fuel consumption in the big HEMI 2014 Durango R/T was 14.7MPG. The sticker came to $45,630 – not including the up to 70 packs of gum in the glove box. I am sure Ron Burgundy would not object to either number. Or, would he?

Let me be up front here. For those of you who think I am too much of a Moparian to hug this beast and extol the improvements made in the 2014 Durango, you may want to watch one of those commercials again. The tag line said it best: "It is kind of a big deal" – it truly is for Dodge.

However, I found myself in a groove with smaller vehicles that do almost the same thing as the big Durango. You may want a three-row large crossover/SUV capable of towing a boat or small trailer to your vacation. Me? I am a single guy with nothing to haul or tow. A Durango is a beast – a lovable one that gets looks, nods and a few kudos along the way. Reality states otherwise. Logically, a smaller vehicle does the trick…

Yes, but what is wrong with being impractical and illogical for once? That Durango R/T – the 2014 model, in particular, is a monster of a ride. It speaks to the "who cares" crowd – with families or not – that enjoys the rocket underneath the hood called a HEMI. I think that is enough to satisfy any automotive enthusiast.

Considering this is Halloween week, I actually did contemplate getting a deep red suit from Goodwill or ARC Value Village, shave off my current beard and go as Ron Burgundy (with glasses). That would mean buying up to 70 packs of gum and throwing them around somewhere. Perhaps hiring a couple to dance only to be scared off by me…er, Burgundy.

Nah…I do not dress up for Halloween. Driving the Durango does not call for me to be Burgundy…or Farrell…or Captain Kaos…or Burt Reynolds…or Roger Moore as Seymour Goldfarb, Jr. acting as Roger Moore…

POSTSCRIPT: The latter references in the last sentence of this article serve as a paean to the movie "The Cannonball Run," directed by Hal Needham. We lost Needham this past week at age 82. He was a director/stuntman who brought us the "Cannonball Run" and "Smokey and The Bandit" films – favorites amongst automotive folks. Hal will be missed, but his cinematic legacy remains vivid in our minds.