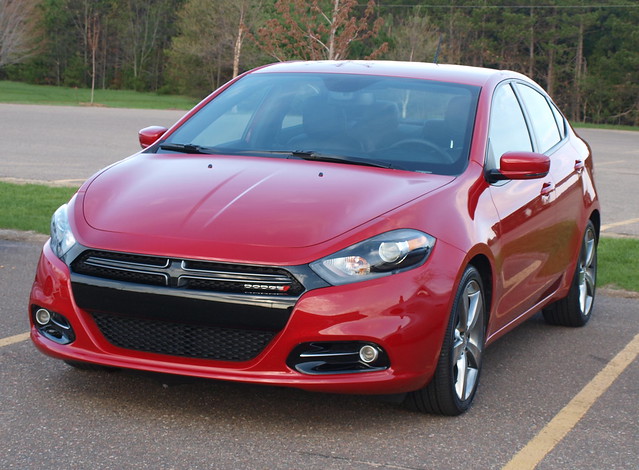 The third time is a charm?

In this case, it may be so. Consider how long we waited for the promised 2.4liter Tigershark four-cylinder with Multiair II induction Chrysler slated for the 2013 Dodge Dart. Then we experienced the slight disappointment that came with the initial lineup announcement where the R/T was delayed with the new bigger 185-horsepower engine.

By January 2013, we got another surprise. That R/T model would become the GT instead. Mopar historians would point out that the GT would be an apt designation, since the Dart was never offered in an R/T trim – ever. Not even the fastback coupe – the Demon – was ever offered in an R/T, despite having some potent motors underneath its hood.

As the 2013 model year came to a close, the Dart lineup was shuffled. The GT finally showed up with the 2.4liter engine. There was much rejoicing in Moparland.

For 2014, Chrysler did another reshuffle of the Dart lineup. The 1.4liter Multiair turbocharged engine would only find a place in the Aero model. I really liked that engine, even with the DDCT dual-clutch gearbox. You would most likely find the 160-horsepower 2.0liter Tigershark under the base SE's hood. The 2.4 Tigershark/Multiair II mill took a more prominent role in the lineup – now available from the SXT all the up to the GT. 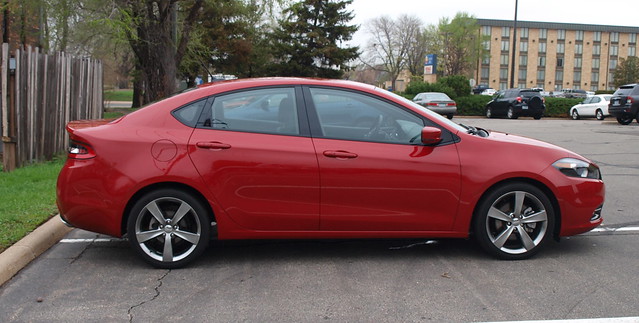 Having never driven the bigger engine, the time came to do so. Even better, it was wrapped up in the GT model adorned with Redline paint, eighteen-inch alloys and a black leather cabin trimmed with red stitching. This example reminded me of the R/T prototype that was shown off at my first drive event with the Dart two years ago.

Why the fuss about an engine and the whole story behind the 2014 Dodge Dart GT? Should this be just a review and simply call it a day?

Dating back to original Five-Year plan Sergio Marchionne laid out for Chrysler's resurgence under Fiat’s tutelage, the Dart story has always been an enjoyable one to cover. Just watching this from the embryo stage where social media was scouted for a name, leading up to the point of its arrival on dealer lots. Every little chapter of this story was entertaining and engaging, but not without its drama and comedy.

Even when I awarded the 2012 Victory & Reseda Vehicle of The Year at the 2013 Chicago Auto Show to Reid Bigland, I knew this story would continue to yield more chapters. Two Darts showed up for full reviews in 2013. Each one had its own tale to tell. The Tungsten finished Limited with the 1.4liter Multiair Turbo and DDCT gearbox braved the cold of February in the Twin Cities, as it went on its victory lap from the awarding in Chicago the week before. A True Blue SXT with the Special Edition Package arrived with the 2.0liter Tigershark and the automatic transmission in the heat of a Minnesota summer. The latter had the honor of being a companion to a Minnesota United FC match.

It is another season, another Dart. Perhaps it is the completion of a trilogy of engines. It also has its own tasks to accomplish. What tales will this Redline 2014 Dodge Dart GT tell as it takes on a different assignment? 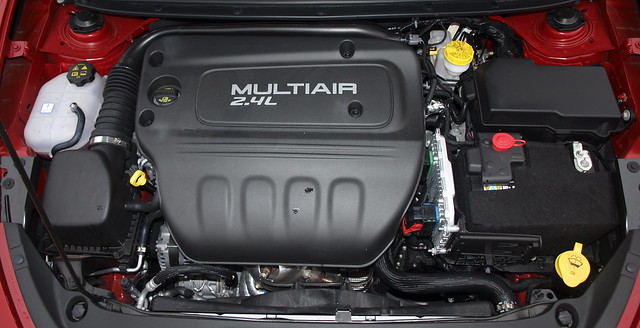 First thing to look at is the engine. The 2.4liter Tigershark/Multiair II has 185 horses and 174 pound-feet of torque on tap, the right amount of power for the Dart. This GT example is matched up with the six-speed Powertech automatic, eventually sending power to the front wheels. Though the driveline induces plenty of revs, consider it entertainment. It wants to run. Let it run. That way, the Dart will be happy.

Needless to say, the 2.4liter was worth the wait. This is the best engine suited for the Dart. I am also glad they made this motor available on the SXT and the Limited, as well as the GT.

The GT package itself is quite compelling. The exterior color is Dodge's own Redline – simply red for the sake of being red. Not much of a red guy, but after some news events the week prior – it just simply works here. Inside is black leather with red stitching and other red plastic trim combined with hard and soft black plastic surfaces.

What makes the Dart really work are the little things we often take for granted. The way UConnect connects up the phone easily, syncs, and plays my music files from my mobile device, the sound quality I get from the standard speakers when I listen to the Twins game, or some R&B tracks. 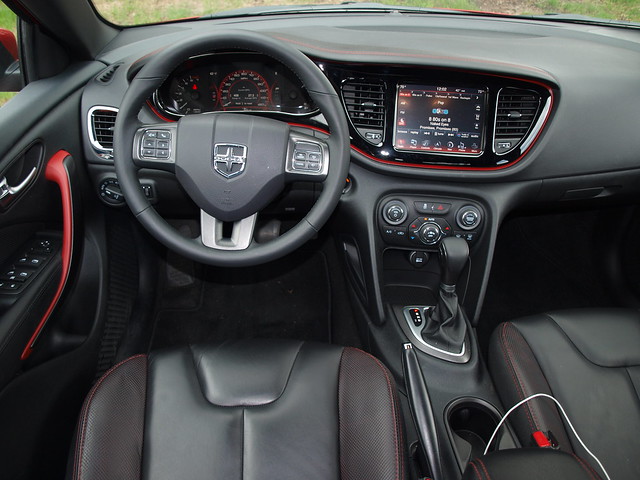 So, why has it not sold in the numbers expected of its competition? One complaints has been the pricing and the emphasis on customer choice. If the problem is price, then a dose of reality is in order. The Dart lineup starts off the SE sedan with the 160-horsepower 2.0liter Tigershark engine and a six-speed manual, starting at $16,495. Not many compacts can claim this low of a price, since the bigger sellers have scaled over the $17,000 wall and beyond. My GT tester came with a sticker price of $25,125, with the Technology Group and other upgrades. That is about right for a sporty model in its class.

If it were my money, I could stick with the GT or jump to the more luxurious Limited model. If I did that, the sticker price only jumps to $25,875 – again right at where most "top-of-the-line" compact models usually reside. However, my pick for a best value of the Dart lineup is an SXT model, add the Blacktop package and several technology options for $22,815. The only thing I would truly miss between the SXT Blacktop and the GT is the switchable speedometer screen on the latter.

As I drove the GT, my mind flashed back at all of the Darts I drove. The impressions I made on driving dynamics had to be compared to the GT's. What I found was consistency. The steering weight was heavy – actually, perfect for me. The brakes were more powerful and stopped even better than I recalled. The Dart GT corners extremely well, with the combination of steering response, effort and near-flat balance through the corners. Despite the condition of the roads with more than enough potholes not fixed across the Twin Cities and beyond, the ride is quite solid and absorbent. But, no one has ever point out how strong the Dart really is. Frankly, this is no delicate flower or the sensitive type. The Dart's personality would not allow such flaws to occur.

But, where does the Dart fall into logic in a segment that has become highly competitive in the past few years? I do not see the Dart as a four-door sedan to carry co-workers and friends in. Rather, it is a compact sedan with an extroverted personality and a willingness to be as charming and loving as the Dart is expected to be. As much as logic tells me that I should embrace the best sellers or any of its competitors that do certain things better, the Dart is simply lovable.

Lovable? I better explain this summation… 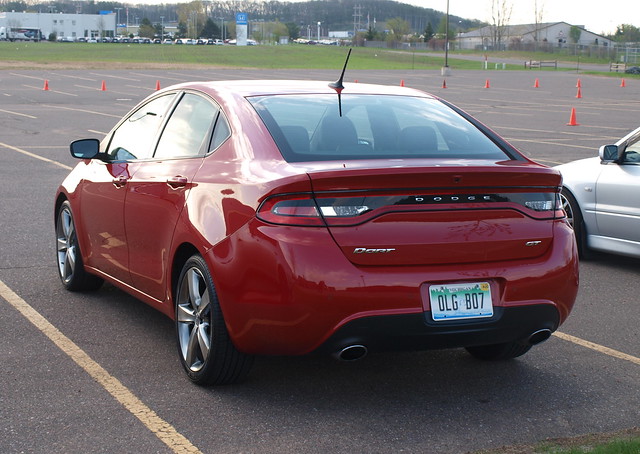 As an automotive writer/journalist/what-ever-you-want-to call-me, you try very hard not to have an absolutely definitive and favorative opinion above all subjects being covered for any given outlet. The Dodge Dart has been a great story to cover since the initial discussion of its existence in 2009. Personally, I love the Dart. It does something better than most of the vehicles I worked with over the past few years. The Dart does what it is asked to do – and executes well. Overall, the Dart puts a huge smile on my face when the engine is turned off for the day.

This ringing endorsement is perhaps shared by you – or not.

Until the new/revised version comes along by 2016, along with its SRT variant, this is pretty much it for the Dart. The GT represents the end of a trilogy – prequels included.

And, we all live happily ever after.