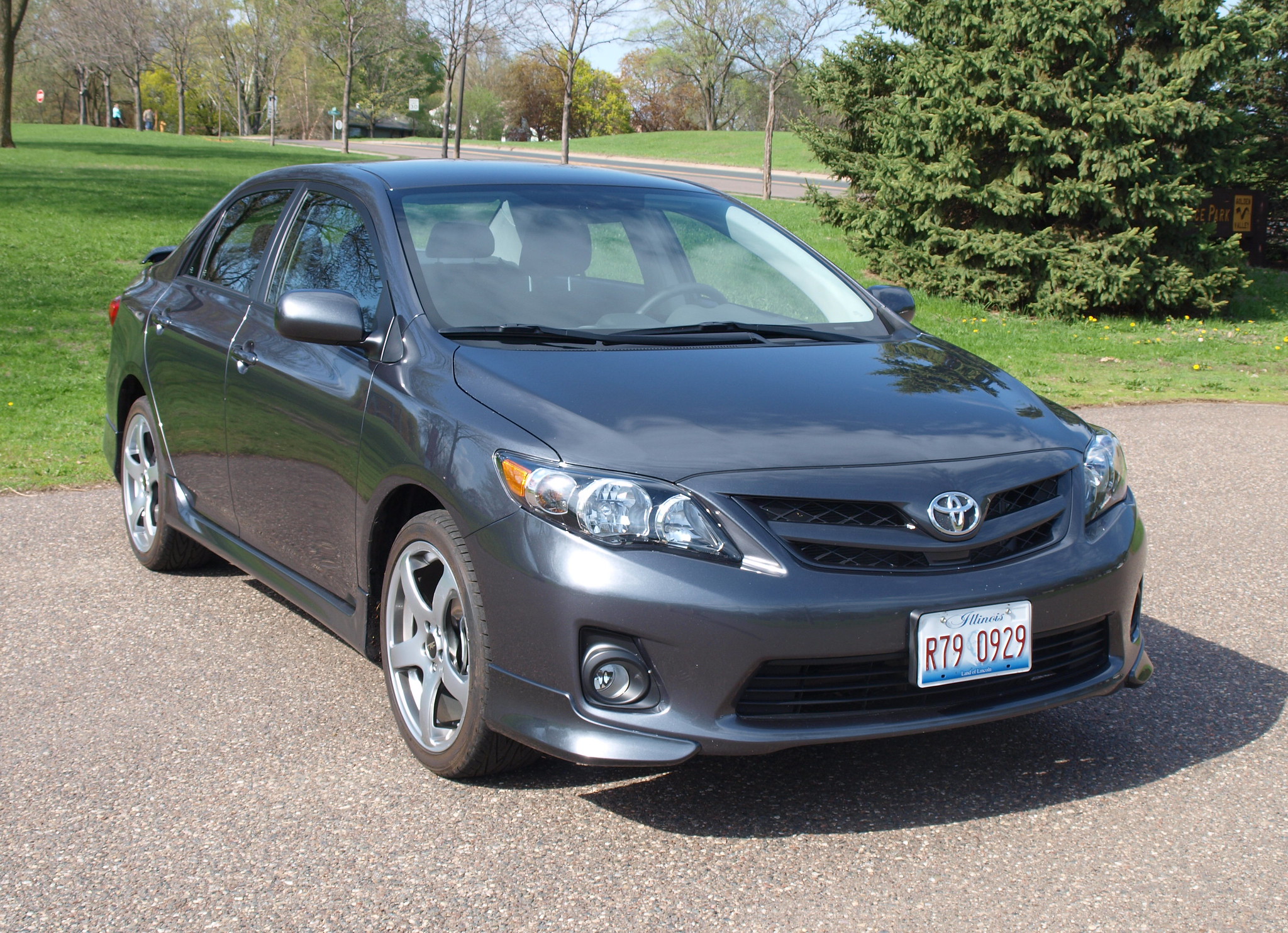 Maybe I was a little harsh.

In February of 2011, I rented a Toyota Corolla LE for the purpose of driving around for errands. Being it was after my return to the Chicago Auto Show's Media Days, I felt obligated to do a review on it.

Before I was offered the chance to drive vehicles for the basis of evaluation, I had to rent cars to offset my transportation needs. With almost every rental car, I decided to take a stab at automotive reviewing. Apparently, I was able to parlay this into what you see on this site and on some other publication in the Twin Cities. The work has not been so bad…

When I reviewed the Corolla, I was already on its task. I was practically unhappy with it. Some might excuse it because it was a rental. Others, by the basis of my write-up, would think that I missed the first front wheel drive generation of the Corolla a little too much to consider how much better the E140 just happened to be.

Even when I was informed that I was getting another Corolla this time as a review vehicle, I began to dread its arrival. In the back of my mind, this is perhaps the automotive equivalent of the "booby prize."

To prepare myself for the Corolla, I began to do some research on it. I usually research each vehicle to make sure my facts are correct before releasing the write-up into the wind. To my surprise, the Corolla has been given some nice upgrades to stay competitive. There were also some new Special Edition models to commemorate the final run of the E140 generation. Perhaps it might be the S model – with bolstered seats, flat bottom steering wheel and a few more upgrades over the more popular LE model.

My answer came on Wednesday. A few phone calls and e-mails revealed a gray S sedan. It had bolstered seats, Entune, satellite navigation, SiriusXM, Bluetooth connectivity and more radio presets to think it is a Lexus. Yet, it had the requisite 1.8litre engine that has been around almost forever. It was connected to a four-speed automatic transmission – something that is considered Jurassic amongst enthusiasts and fellow colleagues.

Further examination revealed a hot set of wheels that were listed on the sticker. Normally, the S model comes with either a 16- or 17-inch aluminum wheel. On this gray example, a set of 18-inch Toyota Racing Development (TRD) wheels were slapped on with some Toyo Proxes 4 rubber meeting the tarmac. On Twitter, someone wondered if it was a simple matter of putting "lipstick on a pig."

Maybe. Then again, the wheels did offer a different kind of look for the Corolla. It is an unexpected look that may look mad, but within purpose. To be honest, the TRD wheel combination made me wonder if this Corolla was meant for high school graduates heading to college – preferably one that lacks on-campus crime. A $2,000 set of wheels and tires are indeed magnets for thieves.

The wheels could have been the story for this Corolla. I was looking for redemption from the original 2011 write-up. In some circles the Corolla had been bashed for being outdated, outmoded and outclassed in the marketplace. Based on that last drive, it was my conclusion as well. Still, I had to be cognizant of the fact that between 15,000 and 30,000 Corollas are sold on a monthly basis in the USA alone. No matter what shiny new compact is introduced at some auto show somewhere across the globe, people are still going to buy Corollas.

It is a phenomenon in itself. Do American consumers simply fall for what is reliable, competent and works every day of its life? Smart consumers do. It also explains why the E140 Corolla sells well outside of this market. If you are in Manila, Beijing, Bangkok, Ho Chi Minh City, Jakarta, Kolkata, Islamabad, Kabul, Nairobi, Lagos, Auckland, Santiago de Chile, or Vancouver – what do you see the most of? Not every Corolla will look like this S model with the TRD rims and flat bottom steering wheel, but you can see the familiar lines and logo front and back a half-mile away.

In all, well over 30 million Corollas have sold worldwide since its inception in the late 1960s. That alone should tell you why this Toyota is worth talking about. I could restate the reasons for its success worldwide. But why? All I want to know is how Toyota will address the Corolla in the face of an evolving segment in North America and elsewhere?

It brings up the topic of the next Corolla. Soon, the E140 will go away. Talk of the new model began when the Furia concept debuted at the North American International Auto Show in Detroit this past January. It looked like a Corolla, but with design elements that actually looked cool on one.

If the overall design of the Furia is any indication of the next Corolla's direction, one would hope for a freer-revving engine under the hood, a choice of six-speed gearboxes – manual and automatic – better suspension tuning and an interior worth living in for miles on end. Yet, the rumor mill seemed to indicate more of the same. For example, the driveline would be carried over to save costs and maintain simplicity. Plus, there is also talk of bringing the Camry's design elements down to the Corolla to maintain continuity across the brand.

If Toyota wants to maintain its leadership, it has to take risks on the Corolla line. It did that a long time ago – the mid-1980s, to be exact. At that time, Toyota offered a front-drive sedan and hatchback, while maintaining the rear drive coupe with the same badge. Decades later, that risk paid off many times over. I am referring to the legend of the AE86 coupe. If you ask me, that was the best lineup of Corollas ever – the astounding performance of the AE86 coupes, the amazing FX16 hatchback and the optimal space utilization of the first front-wheel drive sedans and hatches in Corolla history. The E80 generation was the last Corolla I truly enjoyed.

Yet, this 2013 E140 S put on the most mileage I had in one. It transported me from the Twin Cities to the Midwest Automotive Media Association Spring Rally in Elkhart Lake, Wisconsin – a total journey of 329 miles. How did the Corolla S fare? Should I start by bitching at the Wisconsin Department of Transportation, first?

Actually, I reserved the traditional review write-up for Lavender Magazine (you know, the LGBT publication for the Twin Cities I write automotive content for). You could read it when it is all said and done. In short, it is competent, well screwed together, rather simple device – and it got me to the track without fail. On the other hand, the wheel/tire combination was a bit daft and hated indifferent tarmac. I feared those 40-aspect ratio Toyos would fall victim to the Twin Cities’ network of unfilled potholes.

There was a goal in mind when I got the Corolla the week prior to it's landing in Elkhart Lake. It was to simply get it there in one piece. It certainly fit the “living with it” criteria, having been trotted about to a wedding reception in Anoka County, the start of the Minnesota AIDS Walk, and a graduation party in Minneapolis all in one weekend. It was part-camera car, part-transport for one of the mothers of the grooms, part-commuter and part-shopping trolley. If you want to base an evaluation on any car – I believe these tasks worked just fine.

The gray mare may have taken a few baths of rain and pollen, splattered with bug juice and seen its share of the lack of care taken on the streets of Minneapolis in the wake of winter, but one would understand why the Corolla sells as it does. It is because the Corolla simply does the job. Then again, so does every other car in its class.

Perhaps I am probably just being harsh again.