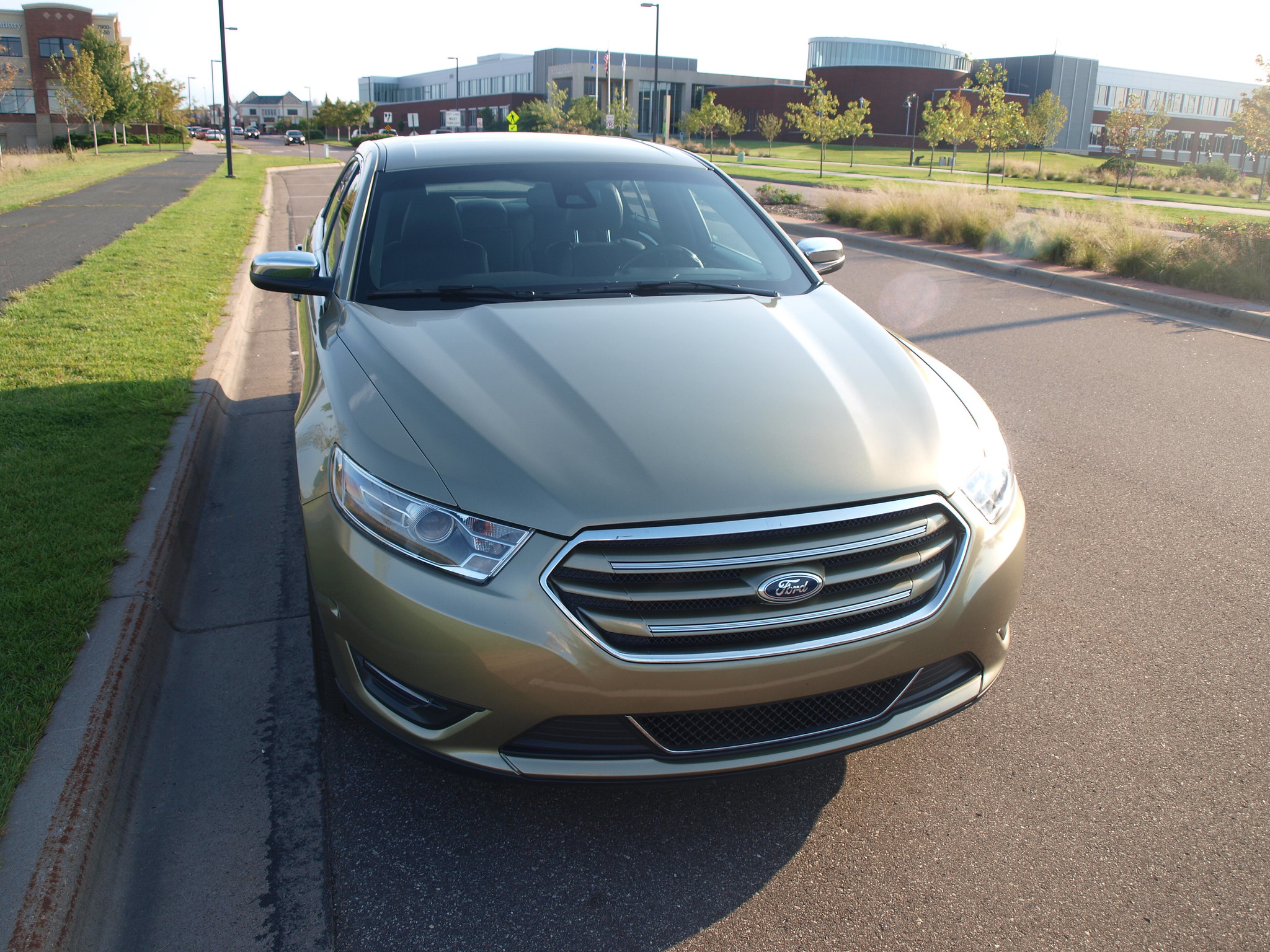 A Victory & Reseda review of the 2013 Ford Taurus

As promised, there is more to this story…

On August 27, I asked whether the Taurus story would continue for me. This chapter began with a weekend full of activity, ending with a ton of stress, disappointment and frustration. Luckily, I knew something good would come my way to balance out this low point. Little did I know it would arrive in a flavor – Ginger Ale.

That was the official name of the wild green color on this 2013 Ford Taurus Limited.

Seeing his Ginger Ale Taurus for the first time brought a smile on my face. It was as someone decided that the best therapy to get through the frustrations and dread of life's daily circumstances needed a flash from the past.

That green reminded me of an old car my brother and I once owned. As I mentioned before, the only Ford our family owned since my birth was that 1974 Mustang II Ghia in a lime green/avocado green color scheme. The Ginger Ale hue is right of the middle – with a bit more sheen and shimmer from the finish in today’s Big Bull.

Aside from this discussion of color, what will this Ginger Ale Taurus Limited ultimately yield? Will the story continue even further?

Starting on the outside, the changes to the 2013 model may seem just subtle. The frontal tucks fit within the company's Kinetic design language. At first glance, you might be apt to compare it to an Audi. If you happen to be one those people, it would be considered a compliment. The goal for this upgrade is to simply have an upmarket air for the Taurus.

As with every other Taurus in history, you can still find yours in a parking lot – provided you have the only one there. With millions of Bulls on the road, the odds of that happening are quite slim. The 2013 Taurus still stands out in a crowd – even more so thanks to its 1960s/1970s inspired design of the roofline and rear end. Modern touches round out the package from the Limited’s 19-inch alloy wheels and aero-influenced sculpting elsewhere.

If I were to push the boundaries of the imagination and historic context – what Ford has achieved was not just a proper replacement for the old Taurus and the Crown Victoria. You might as well consider this the perfect modern interpretation of a 1969-74 LTD – with a touch of the 1972-76 Gran Torino for added flavor. Work with me here – admit that those big Fords of the early 1970s were chock full of details that were simply elegant. The 2013 Taurus – especially in the Limited guise – nailed this missing historic link.

The Limited tester provided further proof of this summation. The level of luxury inside the cabin rivals that of more expensive vehicles in its size class. Black leather adorns supportive seats with more adjustments than imagined. To get comfortable, you simply play with the power seat settings to get it right. In my case, it took several settings to do so. Though the front seating areas may feel more of a cockpit than cabin, but one could get used to be "locked in" behind the wheel once you finally get comfortable behind it. One thing to note is that the front seats are skewed against the center console, but not too obtrusive to feel completely pinned against it – hence the "cockpit" feel. Both front seats are both heated and cooled with variable settings – important for a climate such as Minnesota's.

Rear seat passengers are also treated with almost the same level of luxury as those up front. Room is quite adequate for two adults in the back seat on long journeys.

The 2013's upgrades could be seen right on front of the driver's seat. MyFord Touch has been integrated into the Taurus featuring a huge center TFT touch screen. You can control the SYNC infotainment system along with the navigation, Bluetooth-connected phone, audio and climate control systems. Soft touch buttons also appear below the big screen on the center stack.

The instrumentation binnacle gets Ford's new TFT treatment in the Taurus. Flanking the center speedometer are two multifunction small screens. The left one gives you all of the vehicle's functions from fuel economy and trip computer readouts to showing the tachometer and fuel gauge. The right screen is a redundant screen for MyFord Touch with screens showing you what's playing on the audio system to the person you are talking to. In terms of what MyFord Touch and SYNC could do – this is just scratching the surface. There are enough switches on the steering wheel to control both of the smaller screens.

Considering the combination of retro and modern design, if you know your Fords well enough, you might recognize the shape of the instrument fascia as reminiscent of a 1961-64 Ford Thunderbird – dual cowls with a sloping center stack. The modern touch comes from the higher level of quality to the more tangible parts of the cabin – switches, fascia and door surfaces. The steering wheel feels right for a lot of different drivers with its perfect size, thin, but grippy rim and smart controls. For some drivers, using the center touch screen would be a bit of a stretch to use while driving. The solution to this is to use the capabilities of SYNC – voice recognition and using the redundant switches on the steering wheel – to work MyFord Touch’s functions.

In fact this is the first SYNC-equipped Ford that understood my voice. No, seriously…

Sound comes from a Sony-powered audio system fed by SYNC and MyFord Touch. Twelve speakers of sound provide the mood from a series of sources, including SiriusXM, Bluetooth-fed audio files, HD Radio and other sources SYNC connects with. The bottom line of SYNC and MyFord Touch – it works very, very well. Infotainment, backed by a brilliant sound and ease of operation, makes for great driving pleasure. Ford has simply nailed it here.

Under the hood is Ford's familiar 3.5litre V6 – a versatile powerplant that powers a chunk of its most popular products. With 288 horsepower and 254 pound-feet of torque on tap, this engine had more than ample power to haul over two tons of automobile. As an added sustainable bonus, you can either pour in regular unleaded fuel or E-85 ethanol to feed this V6.

Connected to the FlexFuel V6 is a smooth shifting six-speed automatic transmission. Power is sent down to all four wheels using Ford's latest all-wheel drive system. The combination of the V6 and all-wheel drive would be the most likely driveline for a Taurus in our neck of the woods. You could choose the 240-horsepower EcoBoost 2.0litre four-cylinder turbocharged engine for a new twist on the Taurus and a few more miles per gallon of efficiency. However, the petrol-only EcoBoost 2.0litre turbo it is only available in front-wheel drive.

The key to a good large sedan is a set of driving dynamics designed to soothe the soul. The Taurus made some serious improvements in this department. The ride is solid, smooth and absorbent. Road imperfections and other bumps were felt, but the Taurus' suspension does a great job of keeping them from shocking through the cabin. Once inside the cabin, you are insulated from the world outside with many different forms of sound deadening. I will say that the Taurus was one of the quietest vehicles I have driven so far this year.

Through the curves, the Taurus leaned a tad with plenty of body and suspension control. It would not be the choice to tackle sharp winding roads, but the Taurus was competent through some nice curvy stretches in town and out in the country. The nineteen-inch Michelin tires provided great grip and a quiet ride to boot. Steering was also competent exhibiting decent reflexes, nominal numbness and a light feel at center. Brakes were sharp and to the point in both regular and panic stops. In all, the Taurus was one solid big sedan.

One of the challenges in a big sedan is fuel economy – especially when mixing regular petrol with E85 Ethanol. Overall, the Taurus V6 FlexFuel with all-wheel drive averaged 22.0MPG. Honestly, that is considered par for the course for 4,000-pound-plus sedans.

Because the Taurus now sits on the top of Ford's lineup, its pricing has followed this trend. The 2013 lineup starts off with SE sedan at around $27,000. This Limited all-wheel-drive tester is stickered at $39,940. You get a high level of content at that price point, but it is well worth it. Yet, you could save $5,400 by going with the lower SEL model concentrating on the MyFord Touch, the SYNC, the leather seating while losing a few luxuries found on the top package in the Limited.

There is another choice amongst the Big Bulls – the SHO. With a turbocharger and direct fuel injection slapped to the 3.5litre V6 with the name EcoBoost attached to it, there are 365 horses to run this baby down the highway. You do get all-wheel drive and paddle shifters to add to the performance pedigree of the SHO. When it is all said and done, you have a hot Ford sedan for about $46,000 to play with.

After 27 years, dozens of Tauruses – from the first generation to the current iteration – and thousands of miles covered from coast-to-coast, what about this Ginger Ale-colored 2013 Limited? It reminded me of the first two I drove in 1986/87. Those two 1987 GLs were solid cars that gave American family sedan buyers a completely different perspective on what a big sedan would look like and drive. This 2013 Limited showed me that a Taurus could be exactly that again. Granted, there is an increase of 148 horsepower, a 1,000-pound gain in weight, a technological and safety leap between the two – there was some essence of the older Tauruses inside the newest one.

The Bull still piques my interest.