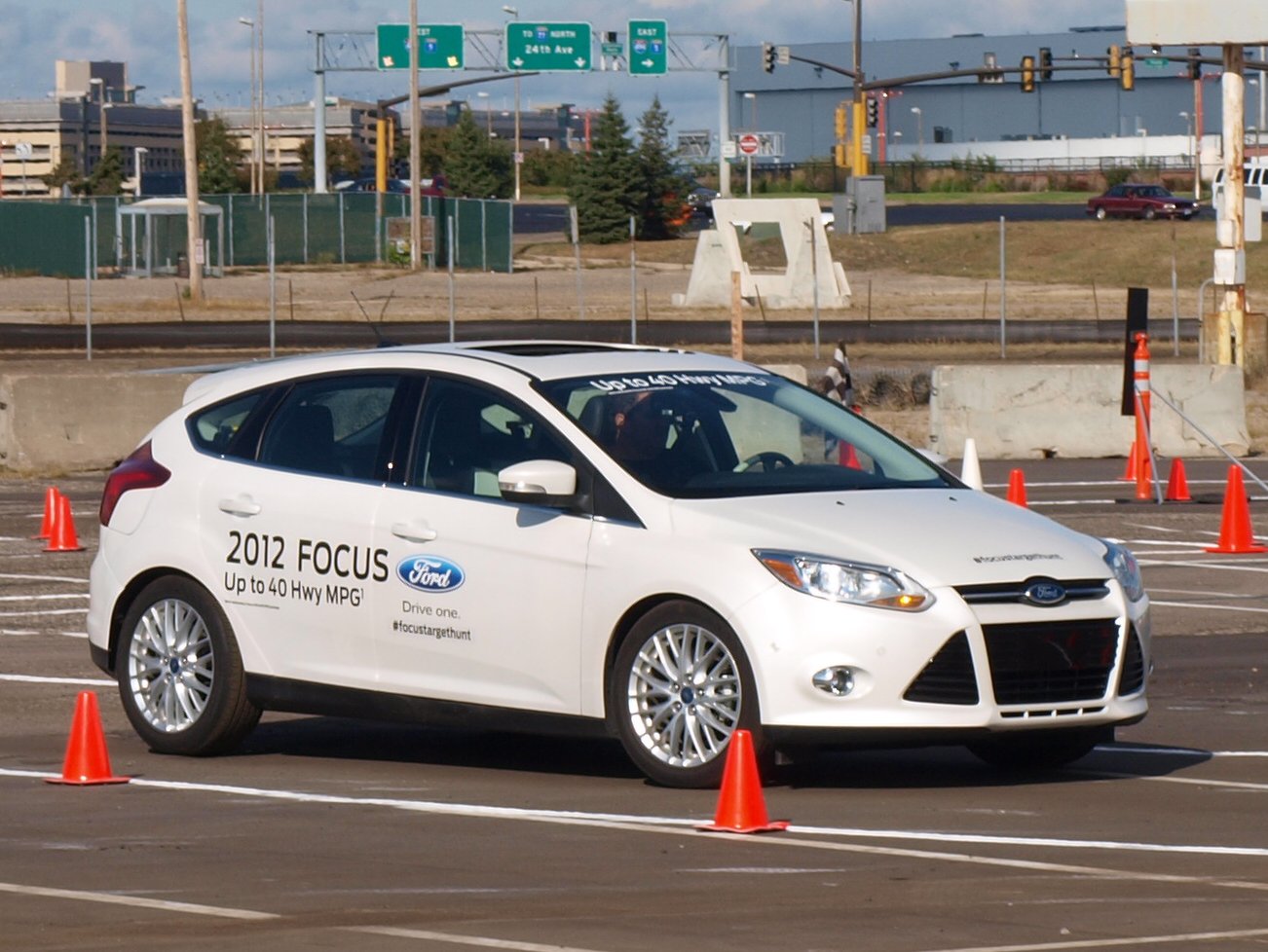 Now, who would allow such an experience to happen for people to test drive one of the big selling automobiles this year?

The coordinators of this event described this experience as a combination of "laser tag and Guitar Hero." In this case, it involved cars. Real live cars…

Now, who would allow such an experience to happen for people to test drive one of the big selling automobiles this year?

Ford decided that the best way to give the general public a chance to drive the 2012 Focus is to do a challenging drive course full of twists, turns and video game/laser tag inspired scoring. Sounds like fun, right?

While shopping at the Mall of America, I saw the promos and the people involved with this event…and, figured "why not."

Being not a video game person, I saw the challenge as a way to test my driving abilities. Ford called this the "Focus Target Hunt." The course was laid out with laser-read targets where scoring takes place. The twists and turns test the ability of driver and car to achieve several tasks, such as parking forth and back, cornering and evasive handling. When a score is made, the driver gets an aural notification that is also derived from video games – a four-point score gets a guitar riff a la Guitar Hero.

Considering that I lived in a crossover a week prior to this, I figured I needed a car to get back into driving shape.

The car used was a silver Focus Titanium sedan – the new top of the line for Ford’s popular compact. It came well equipped – maybe a bit more than I’m used to in my 11 years of experience of what was once one of my favorite cars to drive. I never thought you could get a Focus in leather, a back-up camera and a plethora of items reserved for a larger vehicle. In the Titanium, you're guaranteed a suite of standard equipment short of the kitchen sink.

My score was not good. Maybe OK. But, it doesn't matter. What mattered was that I had fun driving the new Focus. I had a chance to get behind the wheel and experience it on a controlled course.

What did I think of it? It’s tough because I already drove two of the biggest headlines in the segment: The Chevrolet Cruze and the Hyundai Elantra. Earlier this year, I had a chance at the Toyota Corolla – once the leader of this segment for eons.

There were some advantages in the Focus. The power was immediate from the direct-injected 160 horsepower 2.0litre mill. The six-speed automatic transmission was just so smooth. I loved the balance in ride and handling, especially through the more challenging parts of the course. The steering was moderate, yet I hoped for more of an honest feel from the wheel. Braking was quite good…just as I expected from a Ford.

The thing that most concerned me about the Focus was the styling – a universal effort to ensure that everyone around the world gets the same Focus regardless of market. At first, I felt it was polarizing and I would not like it as much as the Elantra or the Cruze. However, the more of the 2012 Focuses I’ve seen on the road, the more acquainted I became with it. The sedan is quite exquisite and upscale. Though, I’d prefer the hatchback with its sporty styling and squat demeanor.

Believe it or not, I have never driven the Focus in the hatchback form throughout the 11 years of driving them. Someday…

Drawbacks? I like larger dials to read and easier to decipher to instrument panels. I also like my controls more straightforward. I’m used to General Motors’ interior setup, but the Ford’s require more squinting of the eyes. There is a huge video screen at the top of the center stack, but I would have to program the buttons on the steering wheel to make better use of the Infotainment system – including both SYNC and MyFord Touch.

One of my biggest issues with compacts is rear seat room. I can state honestly that I can only fit two of me in the car. Anyone sitting in the back must be smaller in height and girth to ride along. The rear legroom is pretty tight – I get more legroom in the Cruze and the Elantra, believe it or not.

The Focus is a very sporty proposition – even more so than before. A controlled course drive event may not give me all of the data I need to make a full summation. Yet, I get it. I get what Ford has been doing to globalize this vehicle for everyone.

Not to mention, I got a chance to play along with this combination of laser tag and Guitar Hero.