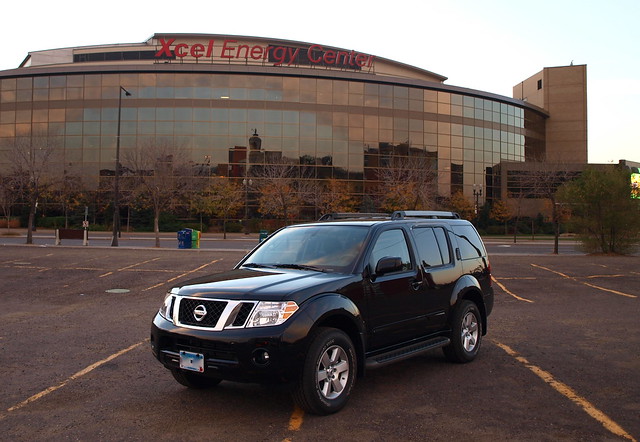 A Victory & Reseda Throwback review of the 2011 Nissan Pathfinder

Remember when Busta Rhymes was in Leaders of the New School?

I know – a completely random thought (and, perhaps, showing my age and taste in music at the time). But, let me talk you through this. One of the craziest lyricists of New York area Hip-Hop was part of a trio that was tied to A Tribe Called Quest, The Jungle Brothers, De La Soul, FU-Schnickens, etc.

There is a song I liked of LONS called "Sobb Story" about a young man’s want of wheels instead of riding bikes, buses or walking all over the place in suburban Nassau County. Busta began the song talking about how he was tired of walking all over the place. After he got paid from some sort of “scheme,” Busta cashed in on a Nissan Pathfinder – the original two-door model.

The original Pathfinder was based on the "Hardbody" pickup truck. It arrived twenty-five years ago, just in time as the SUV market began to define itself with mid-sized models that had one wheel in the woods and the other around the block. Compared to the Isuzu Trooper, Toyota Land Cruiser and 4Runner of the era – the mid-to-late 1980s – it was the first Japanese-branded SUV to sport a more modern look that was as rugged as it was civilized. The Pathfinder was squarely in the playground of Chevrolet's S-10-based Blazer and Ford's Bronco II. Because of the Pathfinder, American and Japanese automakers stepped up their SUV game at the start of the 1990s.

Twenty or so years later, the Nissan Pathfinder seemed to be forgotten in the proliferation of the crossover. Its direct competition had diminished into several directions – mainly morphed into softroaders for families not looking to venture out into the woods. Even the Jeep Grand Cherokee had been softened up with a high horsepower V6 lacking stump-pulling torque in the low-to-mid revs.

There are still those of us who prefer traditional SUVs on occasion want something with a serious grunt to pull trailers without resorting to a V8. We want our SUVs with no-nonsense interiors and Swiss Army Knife capability. Sure, I'd like a bit of luxe, but I also want my friends to feel comfortable and confident in the vehicles ability to take them anywhere.

Well, I never forgot about the Nissan Pathfinder. One never landed on my lap.

In the past few years, I've driven the Nissan Rogue and Murano – Franklin, Tennessee's answer to the crossover craze. One thing about Nissans had been its solid ride, whether it's a sedan or a crossover. I also found Nissan’s designs to be somewhere between entertaining and polarizing. Since I’m a former Nissan truck owner, I also know they are bulletproof reliable.

Nissan’s trucks are a different phylum amongst the Yokohama-via-Tennessee gang. This is not just about mere architecture, but rather a separate approach to product development and vehicle dynamics. No matter which Nissan you drive, there are still some characteristics that are between across the company. One being solidity in design, which is perhaps the most important characteristic of a Nissan above all.

Yes, but what if I was at a Nissan dealer and comparing its diverse portfolio of SUVs and crossovers? If a Murano is a solid tool for long drives, it won’t be useful elsewhere. The Rogue would be too small to do the big jobs a mid-size crossover or SUV would accomplish. On the truck side, the rugged Xterra is set for extinction by the end of the 2011 model year – a victim of the crossover craze. 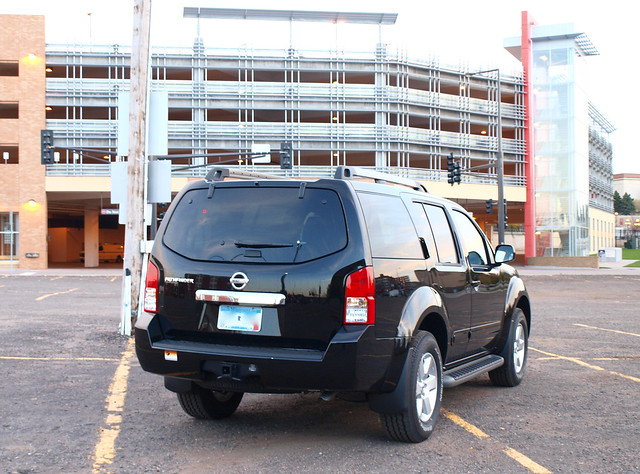 This is probably why I was attracted to the latest Pathfinder.

From the beginning, the Pathfinder was a global product for Nissan. Yet, global tastes dictate that the Pathfinder may not be as effective a product in its class when the Patrol works better. In other markets, the Murano fills the bill nicely. In some cases, the Pathfinder has been slotted as a true SUV with crossover tendencies for the North American market – where most of the Pathfinders sold around the world are now being built.

Clearly, it shows its truck-based roots – built from today's Frontier pickup. The look is genteel next to its Xterra brother, but it does serve a purpose for doing so. You want a Xterra to play with the Jeeps, Land Rovers, Hummers and the oft Porsche Cayenne in and around the canyons. You take the Pathfinder to the woods, but not too deep. It sits well with a campground with a fire going and smores being served from it. It also fits with the cabin up north with a canoe tied to the top – or anything weighing up to 6,000 pounds behind it (In fact, my example had a trailer hitch assembly installed – no hitch, ball or plugs ready to test out the 6,000-pound towing capacity, though).

It even fits better at a suburban home. The standard running boards make this so. 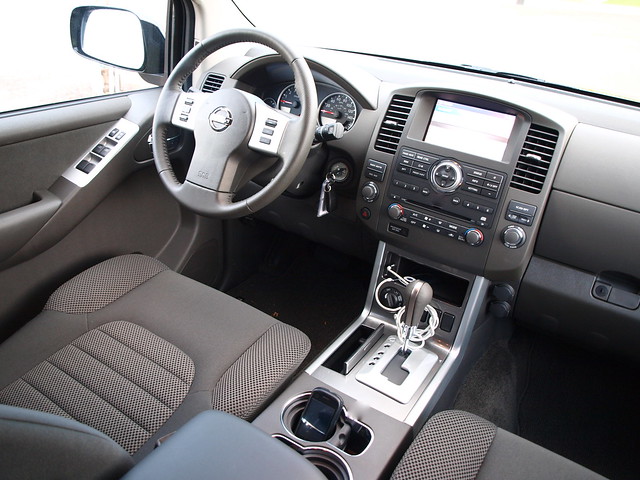 The interior also reflects this intersection of ruggedness and civility. The seats aren't the greatest, but once it knows who you are, they’ll settle in for you. The dashboard has a truck-like utility with some creature comforts for the urbanite. The color screen for the audio/HVAC/information functions is very nice to look at. Even better is having the rear view of the reversing camera on the same screen. The carpet savers are very thick and useful. Overall, my SV example was quite well equipped.

Behind the driver are two not so useful rows of passenger seating. The second row would be OK if I had so-called average-sized people sitting there. Not so my usual cadre of "Bear"-sized fellas. Tall people would find issue with the headroom, let along the honest lack of legroom and back comfort. The third row – forget it. If I fold the third row down, I would have a massive cargo hold to play with! I can pack everything from food for the cabin, bags of clothes, Boomer and a whole bunch more. 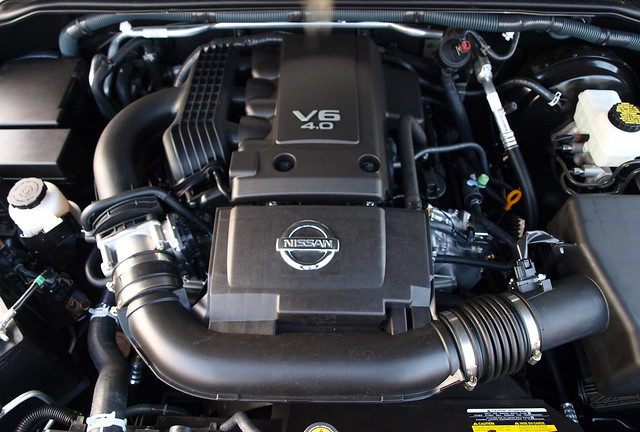 Being familiar with Nissan’s VQ V6 family of engines, the Pathfinder’s 4.0-liter version came as a bit of a surprise. Among VQs, the 4.0-liter is the stump puller of the family. Actually, the 4.0 liter was designed for the mid-sized truck-based machinery Nissan builds – the Frontier/Navara and Xterra included. With 266 horses on tap, the VQ40DE also serves up 288 lb-ft of torque. The VQ40DE is connected to a five-speed automatic gearbox connected to a switchable part-time four-wheel drive system. The dial on the lower part of the center stack of the dashboard also gives you the option of 4WD-Low – I rarely see that anymore these days!

When I talk about Nissan’s patented solid ride, I'm not kidding. Except for road imperfections, the Pathfinder runs smooth and solid. There's never a complaint when given a nice piece of tarmac. It is in the curves where it leans. On some SUVs, the "lean" is usually away from the angle, which explains why the old ones had warnings of tip-overs. The Pathfinder leans into the curve. Though bucking the trend, it’s not exactly a very confident feel overall. As far as braking is concerned – it has a lot of power to stop. Not exactly the shortest stopping distance I felt in an SUV, but you can feel the system work optimally when under load.

There is one thing that continued to bother me about the Pathfinder – the steering. It just seemed so heavy to manage. It does corner well, but the assist seemed either too hydraulic or simply someone decided to weight the assist to ensure a lack of free play in the column. I will always prefer a quick steering wheel action than one that almost feels like the manual steering on my old 1987 Hardbody pickup.

One thing I dreaded was calculating the fuel consumption loop. After all, I am dealing with a 4,779 pound, truck-based SUV with a towing package installed. Was I surprised when the loop was calculated at 15.3 MPG? Could be worse – I could have a 5,000-pound boat to tow around looking for a lake to launch it into… 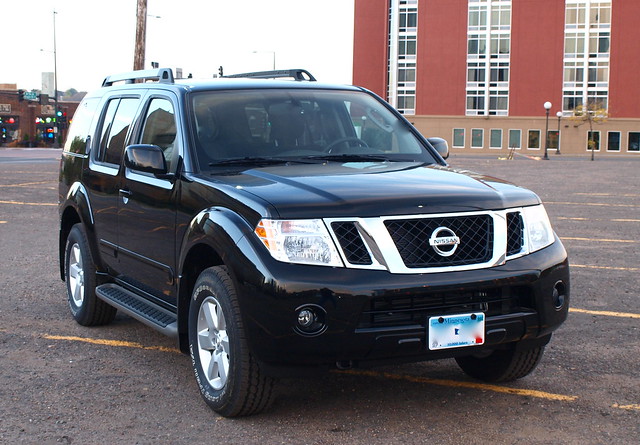 What’s the point of the Nissan Pathfinder when everything else has gotten soft? There are still SUV consumers looking for something with more teeth for the road. Tow capacity is an important part of a purchase decision in this market. Most softroaders normally have a hard time to be considered due to their lack of their tow capacity.

For about $32,000, you can get an honest SUV with honest towing capacity and carry a decently sized family to the cabin. Not to mention one built right in the state of Tennessee! Trust me, it's worth it because you won't feel "stingy" getting one – right Busta?

But, honestly, it's not for everyone. And, that's the "Sobb Story."

PRE-OWNED VEHICLE INFORMATION: Per a search on several car shopping sites, V&R found there were several 2011 Nissan Pathfinders available between $10,000 and $18,000. Mileage and condition vary, but most were found with over 65,000 miles on the odometer, the highest being over 148,000 miles. Always have any vehicle inspected before purchase.