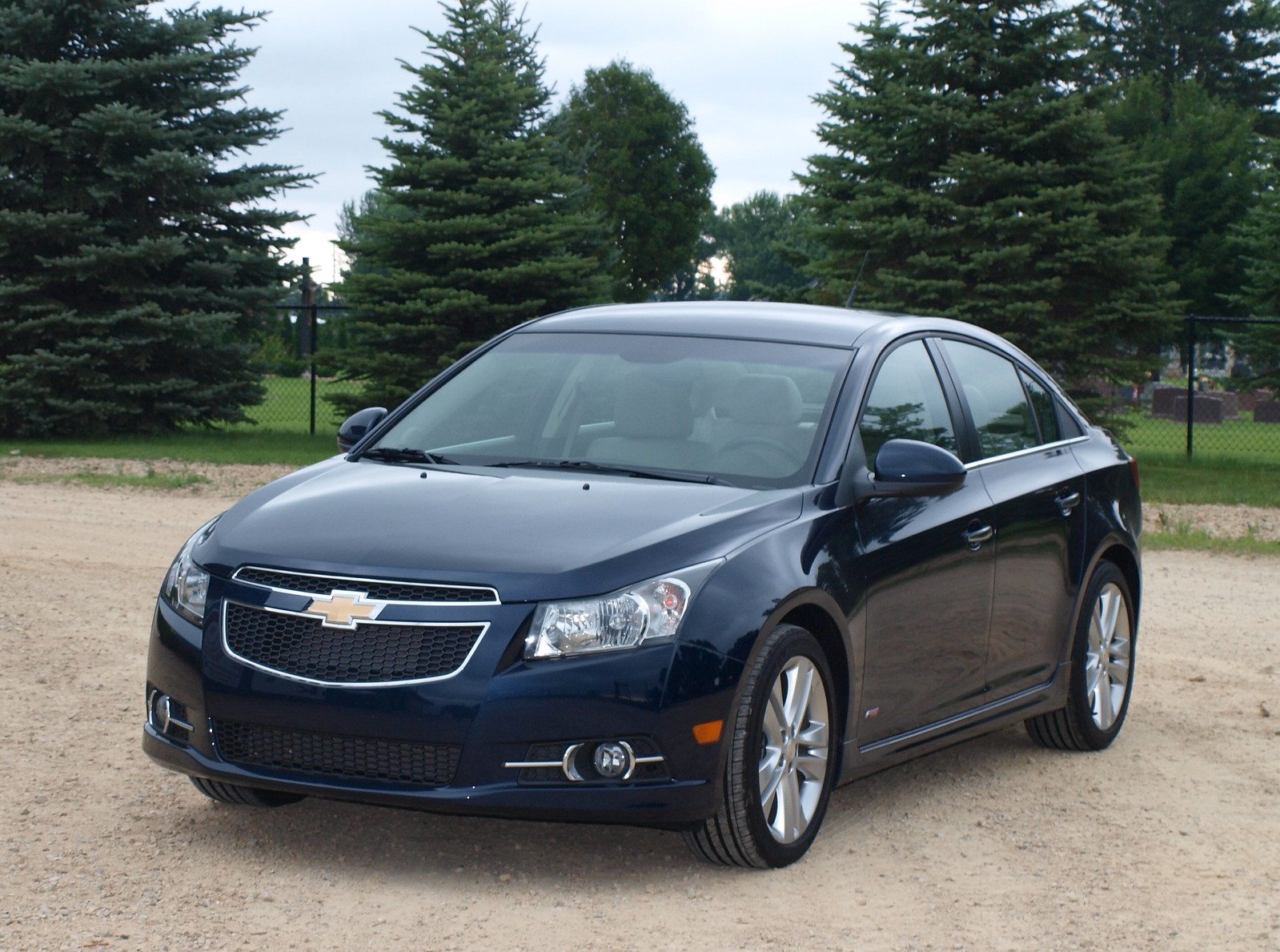 In the middle of May, consumers witnessed petrol pump prices at its highest in history. In response to the extraordinary cost of fuel, the new vehicle market experienced higher sales for smaller cars, SUVs and crossovers.

A Victory & Reseda review of the 2011 Chevrolet Cruze

There’s nothing more fragile than the price of crude oil.

In the middle of May, consumers paid the highest petrol pump prices in history. In response to the extraordinary cost of fuel, the new vehicle market experienced higher sales for smaller cars, SUVs and crossovers.

For years, the Toyota Corolla and Honda Civic ruled the small car market. Yet, in the first half of 2011, both compact stalwarts found themselves outclassed by the competition. As demonstrated in my last review, newer products, such as the Hyundai Elantra, Kia Forte, and the 2012 Ford Focus have changed the game. Since then, a new 2012 Civic arrived at the scene – perhaps a bit too late.

At the top of the compact car charts for the past two months was the Chevrolet Cruze. It's been a long time since we've seen a General Motors product sitting pretty on top of a key market segment – even one dominated by Japanese brands. In fact, the Cruze became the best selling passenger car is the USA in the month of June – outselling the perennial sales king, the mid-sized Toyota Camry.

After all, the compact car is the new family sedan in America.

Sales figures are meaningless unless the vehicle in question represents a significant benchmark for the brand and the industry. This is why the Cruze's sales figures in this country became a huge story for a company that came out of bankruptcy leaner and meaner than before.

The Cruze's story is important once you know its history. For GM to become leaner and meaner, a true global product strategy had to take place. For years, you had many versions of the same vehicle without agreement on a universal design or common engineering standards in every place they built and sold them! In the early 1980s, the Vauxhall Cavalier shared the same platform with the Chevrolet version, but divergent in design and engines.

From Korea, came the idea to unify several models into one compact: The Cruze. They took a design language being tossed around at several studios worldwide to replace what was first known as the Daewoo Lacetti (as well as the Chevrolet Cobalt and Astra on this hemisphere) to build it on GM’s new global architecture: The Delta II. Certainly it shares the same platform as the Opel/Vauxhall Astra and the Buick Excelle/Verano, but the Cruze is designed to reach a much broader audience than any of these other Delta IIs.

Though Holden sells the Cruze under their Lion-and-Ball badge, this purpose-built sedan sports the coveted gold bowtie we all know and love everywhere else on the planet. Today, you can witness the Chevrolet Cruze making inroads in places as far flung as South Korea, India, South Africa, the UK, Argentina, Russia and right here in the good ol' USA.

Will this global compact sedan, a leader of the new school in its class, expunge the memories of Cavaliers and Cobalts past?

It is one thing to look at a photograph of the Cruze. Seeing one live, you get the sense that GM acheived the right look for this sedan. There are some things that may jar you – the grille, for example, and how imbalanced the "Chevy bar" is to the rest of the front end – but it all comes together very nicely.

There were criticisms of the rear end's design as being simply plain. Actually, it is more handsome than the tails on several compact sedans in the market. Some shapes draw you in – the rear lamps, for example – signifying the Cruze's global approach to its overall design.

My beautiful Imperial Blue LTZ example came with the RS package, bringing out a sporty side of the luxo Cruze to compliment the big 18-inch rims and aggressive Michelin Pilot MXM tires. Even with the RS package, the Cruze remains a handsomely restrained design that caters to both global and American tastes.

Inside is typical global GM: Circular instrumentation, wide center stack with buttons galore and slide down gear lever. The Cruze puts it all together with ease, as the functions are good to the touch. However, if you're like me – tall with somewhat thick thighs – you may end up changing the HVAC's temperature without trying.

My LTZ example did not come with a navigation screen. However, OnStar directions can be sent to the car through the Vehicle Information screen beyond the steering wheel. The same turn-by-turn directions also show up on the audio/HVAC screen at the top of the center stack. I was also pleased to put my BlackBerry in the binnacle behind the gear shifter instead of having to take up a cup holder. Sound came from a set of Pioneer speakers that provided a very nice tone overall.

The seats were covered with Light Neutral leather that complimented the Cocoa accents all around the interior. I found the seats were firm and supportive for both boring commutes and spirited driving. If I were sitting in the rear, I would give up some legroom, though my head would nestle into the headliner. Trunk space is quite generous to handle everything from road trips to a fluorescent bulb replacement run I made to Home Depot (with one of the rear seatbacks folded down for better security).

In the LTZ, Chevrolet plunked its 1.4litre ECOTEC DOHC 16-valve turbocharged four under the hood. It may be the right choice for this model, but there were a few things that provided some concern for lead foot people like myself. There was a noticeable lag in the turbo felt when trying to gain speed on the highway. Once the lag was gone, the small ECOTEC turbo unleashed its true power as it settled into cruising speeds. As with most small mills, once you get going, it rewards you handsomely. A six-speed automatic gearbox is connected to the small turbo, driving the front wheels.

At this point, I would give an overview of the driving dynamics of the car. However, I wanted to tell a little story here. On Saturday, I decided to take the Cruze on a bit of a country drive through parts of southeastern Minnesota and western Wisconsin. As I approached the end of my first leg of the drive, the directions OnStar provided me pointed to a gem of a road not far from the banks of the Mississippi River. I sometimes complain that living in the Upper Midwest left me devoid of the kind of roads that make drivers explore their vehicles and driving abilities further. The woods near the bluffs of the mighty Mississippi revealed a piece of fantasy tarmac in the form of Goodhue County Highway 19.

Until I made that left turn onto this magical road, the Cruze was a straightforward, solid driver. It rode well as it absorbed every imperfection on the road. It handled extraordinarly well, steered rather decently and stopped very nicely. On Goodhue County Highway 19, I saw another side of the Cruze. While some compacts with upgraded content usually forget to add a few things to augment its alloys and rubber, GM gave the Cruze some serious bearings. Chevrolet called this upgraded set-up their "Sport Tuned Suspension." No settings to toggle through – just throw the car in a curve and let it conquer it. The Cruze enjoyed this lovely hidden road so much – it wanted to do it again. Moreover, I wanted to do it again in the Cruze!

Being a driver's compact sedan, there is a price to pay for all this fun and frolic: Fuel consumption. While many compacts try to entice you with promises of high fuel economy, I have to remember that high-content, turbocharged, "sports tuned" sedans may fall short in that department. My consumption loop for the Cruze LTZ RS was 24.8MPG.

Then, there's the other price to pay for such a car of this content and ability. It used to be that mainstream compacts – even top shelf models – would never dare reach the $20,000 threshold, unless you were European or wearing some other premium brand. The bottom line on this particular Cruze LTZ RS was almost $24,000. One might think "that's too much to pay for a compact sedan!" I would agree, but the price actually makes sense if one is looking for a high content sedan that rewards the driver and entertain its passengers over every mile driven.

There is another reason behind the pricing. If you actually feel the quality of materials and examine the overall build quality of the latest compact Chevy out of Lordstown, Ohio, you will see why the Cruze is priced at that level. There are other factors behind the rising cost of automobiles these days, but that is another discussion entirely.

Not everyone is going to buy a LTZ with the RS pack like the one I drove. There have been many who bought the Eco model for the fuel economy alone. Rental car fleet buyers carved up enough 1LTs to keep travelers entertained as they flog them around town. Realistically, Chevrolet consumers will most likely make one of two choices: Those who hate turbos will buy the LS with the regular 1.8litre ECOTEC under the hood. For those who want the turbo, but cannot afford an Eco, will get the 1LT model with enough goodies to keep everyone happy.

How does all of this justify the rise of the Cruze as the king of all passenger car sales? Was it because Toyota had been reeling in light of continuing blips against its reputation? Was it also because consumers felt they could no longer afford to fuel up their larger vehicles (sedans, SUV/crossovers, etc.) now that petrol appears to be permanently parked at $3.49 a gallon and above? If both points were the case, then GM capitalized on a golden opportunity in the face of changing consumer behaviors by bringing its global compact to North America.

Outselling the Toyota Camry after years of dominance in the market is a huge feat to accomplish. To do so with the right product at the right time makes this feat worth the effort. GM has a winner in the Cruze. Both retail and fleet consumers have been very happy to take these robust compact sedans at a time when the opportunity was ripe to do so.

As a compact sedan, the Cruze exhibited many positive attributes supporting the recent headlines on its success. It simply feels successful. I can certainly say that one drive in the Cruze will make you forget about any compact Chevrolet before it – even those fun-to-drive Cavaliers of my 1990s!

With a bit more fine tuning, the Cruze would be a true leader amongst passenger cars here and abroad. As audacious as that sound, the Cruze already delivered on a huge promise to its owners of a reborn GM…and, now, a truly global Chevrolet product.