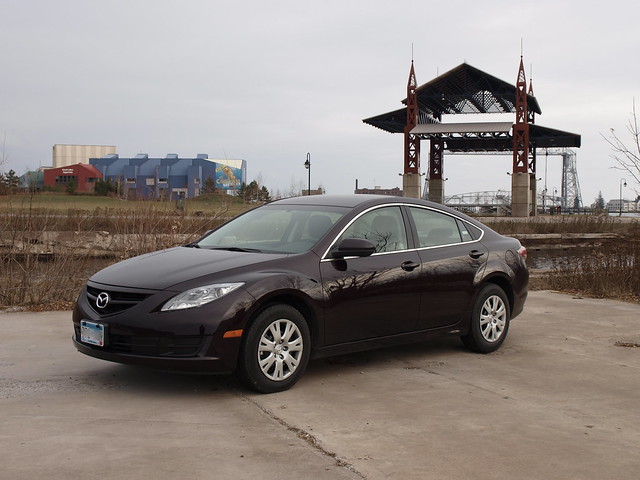 A Victory & Reseda Throwback review of the 2009 Mazda6

When you love a car so much, you fear that any changes to it would be too revolutionary for its own good. A vehicle goes through generations with each one building upon the success from the previous one. In many cases, you can see improvements upon what was missing from the last model.

A bit of history is in order. My brother bought our family’s first Mazda: A 1979 626 2-door coupe. It came from a lineage of Capellas, which began in the states as the RX-2. The 626 was a piston-engined Mazda aimed at the Toyota Corona/Datsun 710 crowd. In fact, the 626's direct competition was the popular first generation Honda Accord, despite lacking a hatchback for its 2-door model. That was fine because the 626 drove like a Japanese imitation of a BMW 2002. Well…to me, it did!

Since then, I had the chance to drive every generation of the Capella through the 2008 model. Much to my disappointment, I found the first front-drive 626 to be a bore. I liked the coupe’s looks, though. The next generation was an improvement and I almost bought one in 1990. I opted for the Acura Integra instead. After that, I took an MX-6 along the Sacramento River delta in foggy conditions. Now, I liked that one! The last 626 model was a regular in my drives out East. Yet, the blandness came back in time for its Americanization.

However, nothing can top the last Mazda6 for me. If I wanted a sporting sedan, I grab one of these puppies, throw around the curves, push the engine to 6000 RPM and scream "wheee" at inappropriate times of the day and night. I simply loved this car.

When Mazda announced a new Capella/6 for the world, I hoped that it would carry some its zoom-zoominess over into the larger frame and keep some of the best I come to enjoy from the 6. 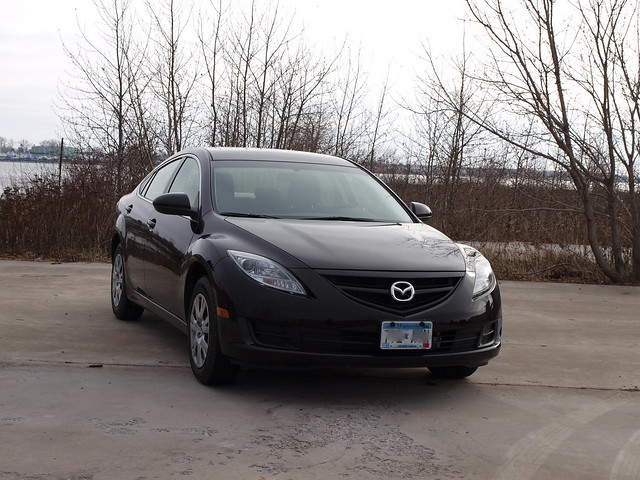 Before I get into it, I must point out a few things about the new generation 6. First of all, it’s available in a 4-door sedan only. Don’t get me wrong: I love the previous 6 in the sedan. Personally, I preferred the hatchback model that was canceled for 2008. Mazda decided not to do a hatchback for North America this time around.

What about the wagon? Sorry, no wagon, either.

Instead, we get a larger four-door sedan aimed right at the belly of the hotly contested mid-size market. They had to enlarge it because the biggest complaints from consumers were that the previous 6 was too small. I agree with the complaint because I feared my friend Michael (standing 6’4”) would not like being shoved in the back seat of the previous 6.

The good news is that I have more room behind the wheel. Not to mention enough room for four adults, though I had five for a short distance in Duluth. They were fine. All around, the seats were firm but livable.

The instrument panel has improved with better materials but retains a lot of the familiarity of the previous model. There is one thing I must do a Snoopy Dance is the inclusion of an auxiliary plug-in. Finally, I can play my iPod Shuffle while driving a Mazda6! It’s not a big deal to most of you, but, c'mon, we have MP3 players we’d like to integrate into our vehicles, right?

Incidentally, the iPod/auxiliary port integration worked so well through Mazda's standard audio set up that I had a near-swerve off the road thanks to comedian William Brown’s "The Inconvenient Couch" podcast. I won't describe what transpired somewhere in Chisago County on southbound Interstate 35, but most audio systems can do well with the funniest of bits. Let alone the rare 1980's Rock moment somewhere approaching Hinckley with Whitesnake's "The Still of The Night" channeled through the auxiliary port.

Outside showed some of the shapes that Mazda had been playing with on their latest concepts. It is shapely and aggressive which are things I can live with. It certainly stood out as I found myself with the only 2009 Mazda6 in the entire Twin Ports area for a fortnight.

What made the last Mazda6 a joy was the way it drove. At first impressions, I thought the new 6 went soft. Granted, it was the lowest model of the line shod with 16-inch wheels with plastic covers, so I feared a repeat of the last generation 626 sedan. There are some people I know that own examples of the late 1990's-early 2000's Americanized Mazda Capella, so to those friends, please accept my apologies for my references to your car. 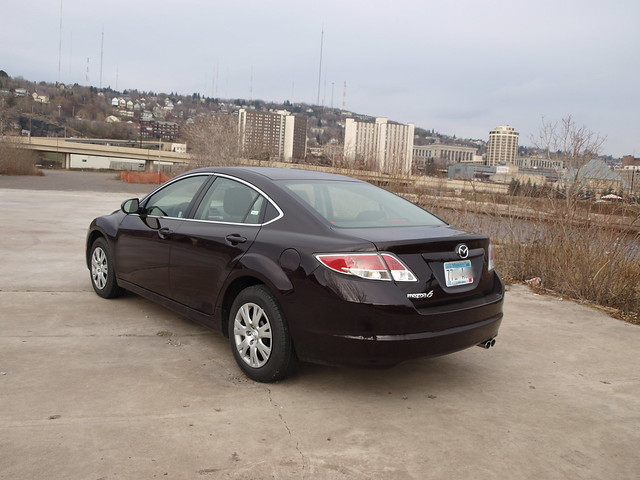 Still, I drove my share of mid-size sedans to know how much I appreciate the smooth ride of the new Mazda6. Handling and steering were a bit off, supporting my “soft” summation. It is until you step on the brakes that you know this is a Mazda6. Again, the new Mazda6 is not the sharp-shooting midi-mid-size sedan it used to be. I’m certain if I went up the lineup, there are 6’s that will remind of the exploits from the last generation of the Capella.

Even with hill climbing duty in Duluth, along with hauling a bunch of friends across the east side of the port city, the fuel economy loop was a decent 24.8MPG. This is a good sign that I'm going to like the new generation Mazda6.

Another good sign of being pleased with Mazda's new mid-size sedan was the way it made the drive home down Interstate 35 so easy. It’s not perfect, but it performed admirably. It also makes choosing a good mid-size sedan amongst this crowded field much more difficult.

If you can stomach the credit crunch and the unannounced recession, the Mazda6 is certainly hedge-proof. We may see a few of its competitors fade away in the next year or so, but the Mazda6 will be here. As will the Toyota Camry, the Nissan Altima, the Honda Accord, the Hyundai Sonata…and so forth.

PRE-OWNED VEHICLE INFORMATION: Per a search on several car shopping sites, V&R found there were several 2009 Mazda6s available between $2,900 and $6,000. Mileage and condition varies, but most were found with over 100,000 miles on the odometer, the highest being over 149,000 miles. Always have any vehicle inspected before purchase.