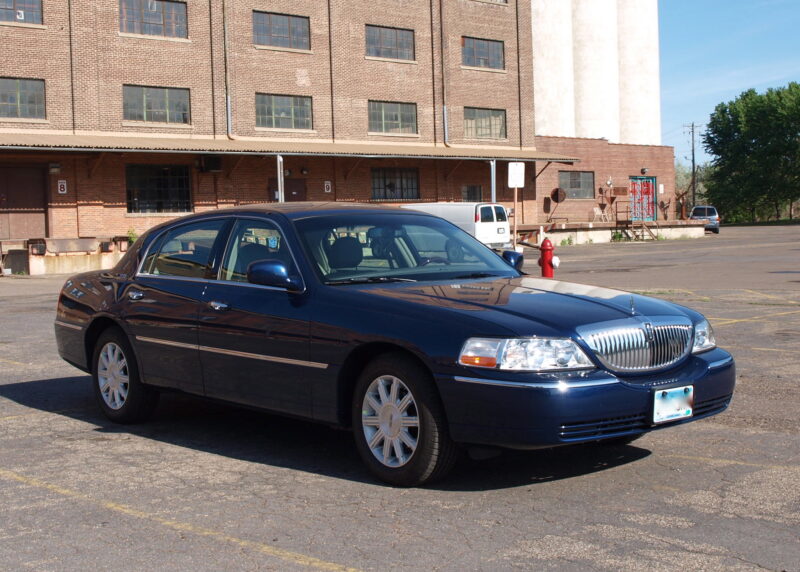 A Victory & Reseda Throwback Review of the 2009 Lincoln Town Car

Just before taking the wheel of this luxury yacht, I did some research on the then-new Rolls-Royce Ghost. The newest Rolls sedan, based on BMW's latest 7-Series, is looking more to be perhaps the best automobile for drivers in this vaunted line’s history.

Now, one might argue that the newest Phantom sedan is perhaps a sign of absolute excellence. Granted this single model not only saved Rolls-Royce from obscurity but made BMW some valuable coin. Add the Phantom Coupe, Drophead Coupe and the upcoming Silver Ghost and all one could say that it’s not just a comeback for the ultimate in luxury automobiles.

There is one problem with Rolls-Royce. In contrast with the promise of the upcoming Silver Ghost, there is still the enormous Phantom. Frankly, one does not drive a Phantom. You simply can’t drive one like a Bentley Continental Flying Spur or a Maserati Quattroporte. If you own a Phantom, you ride in the back and your driver will carry you away. It's just too astute to simply get behind the wheel.

On this side of the pond, there is a car like the Rolls-Royce Phantom. You probably know which one I am referring to. This was demonstrated last September in Toronto when I opted for a quick and comfortable way to get from Pearson Airport to the Church and Wellesley Village. I must admit that I thoroughly enjoyed my chauffeured driven experience in the back seat of a Lincoln Town Car.

Now, the tables have turned. This time I was behind the wheel of a Town Car – a place I'd prefer not to be even if I had to justify doing so.

Let me establish this fact: The Town Car is a goner. Built on the Panther rear-drive platform that had seen police and livery duty in its long life, this car was swapped from the shutters of Wixom, the home of Lincoln for eons, to the proletariat assembly lines of St. Thomas, Ontario. The livery car is simply built alongside the police cruisers and fleet loss leaders. To the point, this is the final year of production of the big rear-drive Lincoln. St. Thomas will continue to build the Ford Crown Victoria for police departments and taxi companies and the Mercury Grand Marquis for rental car firms until Ford decides what to do with this old platform.

My 2009 Signature Limited sedan came in an interesting shade of medium blue with a light tan leather cabin. As luxurious as it appears, I found all of this quite crude compared to luxury cars in the same price range. The switchgear, instrumentation and plastic wood just screams spit-elegance. It's just too cheaply made for a car with a starting price of over $46,000.

I certainly get plenty in terms of equipment for $46,000-plus. Sadly, it does not include Sirius satellite radio, Microsoft Sync, satellite navigation, an auxiliary plug-in for your MP3 player and lumbar adjustment for the driver. You can’t get any of these things on a 2009 Town Car Signature Limited! I’m sure we can find a lot of other things you can’t get on this former queen of American luxury cars.

What you do get is a 4.6-liter V8, with only 239 horsepower, connected to a four-speed automatic. It is not exactly a screamer, but it does propel you into a lithe existence on the road. You do get Anti-lock brakes and traction control, a consolation prize for saving $250,000-plus on a Rolls-Royce Phantom for a North American-built chauffeured-driven device.

In the midst of finding fault with the big Lincoln, it all began to make sense. A few adjustments to my driving style, which included a short shuttling of my friends from the Twin Cities Goodtime Softball League for a lunch run, and one begins to enjoy the litheness of the Town Car. By not emphasizing throttle control and adjusting my maneuvers, I found space behind the wheel that was part-chauffeur, part-luxury car owner. As tempting as it may be, I did not expect to do some power sliding or tackling a mountain road in the thing, but on the highway and around town, it’s really quite nice.

Certainly, the seats were not entirely supportive. An attentive seating position also comes with penalties in working around the instrument panel. The Soundmark audio system lacks the stunning excellence of Harman International OEM audiophile componentry. But, all is forgiven…

Once you get over the extremely soft, but balanced ride, the soft, but sure braking and the responsive steering, you acknowledge its presence as the last true North American flagship sedan. Cadillac has become more globalized in their approach to making luxury automobiles, while Chrysler still employs components from their former co-owners in Germany. Yet, the Lincoln Town Car reminds you of a day cars like these were de rigueur in upscale neighborhoods across the continent.

What made this lithe driving experience worthwhile was the surprising efficiency rarely seen in a 4,500-pound automobile. The fuel economy loop turned a surprising 21.4 MPG – a personal record for a V8-powered automobile!

Yet, is the Town Car truly worth the experience? Not quite. To take things in consideration even in this economy, I can save $3,000 and get a lovely sedan that is miles better quality-wise and driving-wise than the Lincoln Town Car. Can anyone say "Hyundai Genesis V8?"

Although the Genesis would be the right choice in this market segment, this economy be damned, even the Lincoln Town Car's overpriced crudeness could be had at a much more reasonable price. If you can live with living the lithe life without the chauffeur and the tech goodies, give the Town Car a try. It may not be for everyone…then again, neither is the Rolls-Royce Phantom.

PRE-OWNED VEHICLE INFORMATION: Per a search on several car shopping sites, V&R found there were several 2009 Lincoln Town Cars available between $5,800 and $14,000. Mileage and condition vary, but most were found with over 70,000 miles on the odometer, the highest being over 149,000 miles. Always have any vehicle inspected before purchase.