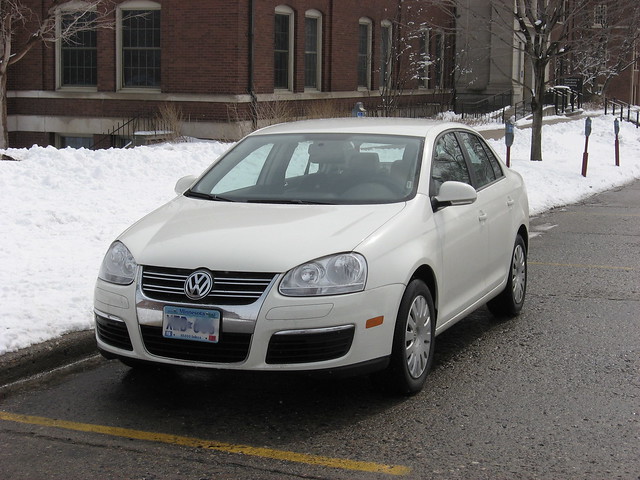 A Victory & Reseda Throwback Review of the 2008 Volkswagen Jetta

There is urban. Then, there's urbane. Can you be both?

Both are valid lifestyles for city living. Yet, each label denotes certain socio-economic, geographic and aesthetic qualifications. The larger question centers on the idea of purchasing a vehicle that is common amongst one of these groups, if not both, and not lives either lifestyle.

The challenge for Volkswagen of America is to present themselves as an automotive brand that caters to everyone. Their urbane core is loyal to a fault. However, they would like to get back into the urban community as well as the mainstream of North American consumer society.

You will hear in next several months about how Volkswagen is doing that, through products such as the Routan minivan (essentially a Chrysler LLC mainstay with a few Volkswagen bits added on) and the forthcoming city car product.

In the middle of all of this is the Mexican-made Jetta sedan. The volume seller in the Volkswagen lineup, these sedans reflect a product no longer wanted by Europeans, but loved by urbane Americans. The proposition seems fine, but there are some things that simply do not fit…such as where it is supposed to be in the marketplace.

To compare this to a Camry or any middle-of-the-road family sedans, the Jetta falls on the small side. Conversely, if you put the Jetta in the same market segment as the Toyota Corolla, the pricing alone would put it out of reach for those looking for a competent sedan in this class.

From my late March snow experience on the first day of spring, the Jetta S sedan I sampled proved to be very competent. What I love about this car is how it drives. The combination of the 2.5-liter five-cylinder motor, six-speed Tiptronic transmission, anti-lock brakes and traction control make for a formidable vehicle to tackle the crappy roads and unplowed parking lots around The Cities. 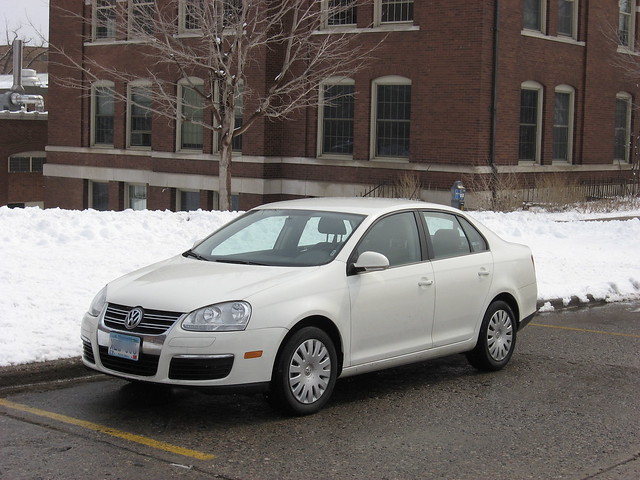 The traction control worked without causing any further anxiety on my part. This is a huge plus in my case! Part of it are the standard Bridgestone Turanzas shod on this Jetta S. They grip fantastically, especially the standard 15-inchers. Steering was sharp and responsive as were the brakes. Even with the ABS enabled, you simply do not feel a thing as it worked! The ride/handling package was just right on the Jetta.

Inside, it took some work to find a comfortable position behind the wheel. After playing with the rake, recline, height and steering wheel adjustments, I settled into a nice daily driving position. The seats are made for narrower bodies, but it did adjust to me just fine. A couple of complaints on the interior: Why would you put the auxiliary jack in the glove compartment? I left my iPod Shuffle at home in protest. Also, why makes things a bit more complicated than, say, basic controls? It took a while to figure out the cruise control and some audio functions on the Jetta. Also, do some of you find the control stalks off the steering column somewhat confusing?

What’s even more confusing was my fuel economy loop. In hopes of seeing true fuel efficiency in a five-cylinder than a six-cylinder, I was surprised at the 20.1 MPG figure I turned in a day’s work. Granted, I responded to the willingness of the VW to do its work in a sprightly manner, yet to turn a fuel economy figure similar to a Chevrolet Impala is disheartening. Thankfully, VW is reintroducing the TDI later this year.

As for its place on my shopping list, as much as I love to keep it there, the fuel economy alone is a threat against my "signing and driving" as Volkswagen wants us to do. Overall, it is an enjoyable package with an urbane flavor. It does the job during winter while it gives you wings for potential road trips in the summer. However, the CleanTDI will be a welcomed addition back to the Jetta lineup, as well as the new SportsWagon.

PRE-OWNED VEHICLE INFORMATION: Per a search on several car shopping sites, V&R found there were several 2008 Volkswagen Jettas available between $4,100 and $8,000. Mileage and condition vary, but most were found with over 189,000 miles on the odometer, the highest being over 152,000 miles. Always have any vehicle inspected before purchase.