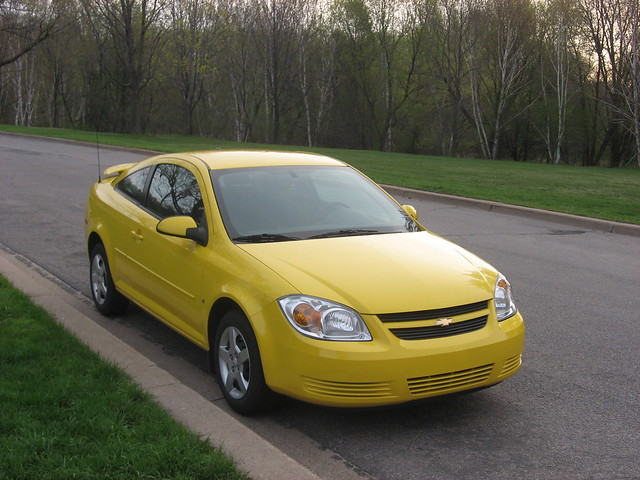 A Victory & Reseda Throwback Review of the 2008 Chevrolet Cobalt

You know, YouTube is a good place to get material for my writing.

For example, I watched a clip from the BBC's "Top Gear" featuring a celebrity interview from Jeremy Clarkson with Anne Robinson, the former host of "The Weakest Link." Clarkson thought it was fun after a few comments by Robinson to test her "blokeiness," so to speak.

In a montage of young men standing next to various cars to gauge Robinson's reaction to those vehicles that were meant for a guy to attract women, Clarkson had the camera pan to a Mazda MX-5 Miata, Robinson immediately reacted to the roadster that “it’s his sister's, I bet!” Clarkson further quipped that the Miata was "a girly car," in which Robinson threw more shampoo on the fire by stating that it is "not even a hairdresser's car, but the receptionist of the hairdresser's car."

In this country, it is not Miata that would be considered "girly." I know a few Miata owners who would object to Mr. Clarkson's and/or Ms. Robinson's summation of it. In reality, it would be a vehicle similar to the screaming yellow example pictured above that would take the Miata's place in both Clarkson's and Robinson's eyes.

Not that the Chevrolet Cobalt coupe exemplified manly aspirations. My LT coupe, replicate with rear wing and a monochrome yellow paint job, reminded me of a joke an old acquaintance in Madison, Wisconsin made when I drove a Chevrolet Tracker SUV one time. Not to be exact in what he said, let's just say that the Tracker (a Suzuki Grand Vitara of yore) was considered less manly.

I’ve driven Cobalts before. I had mixed feelings about them. I still do. Though there are redeeming qualities the Cobalt has to offer, there are key detractions that keep me from embracing the car and throwing it on my shopping list for later this year.

The redeeming qualities are truly skin deep. Under the hood is a proven ECOTEC 2.2-liter motor connected to a reliable 4-speed automatic. The original North American ECOTEC (actually engineered in Australia) is smooth and relaxed when pushed to highway driving. Turning the car is just as relaxed, but with some feel of the road these days…a change from earlier Cobalts. It rides well, handles decently and brakes competently. 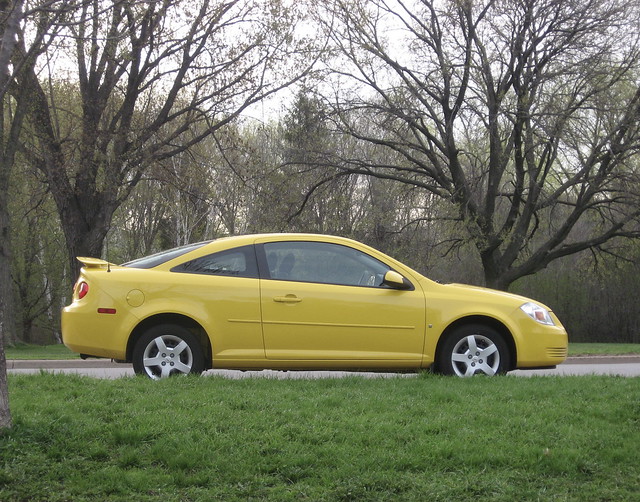 It drives well, true. However, the driver doesn't think well enough for a chassis let alone the car on top of it. Let's face it; the car in yellow paint is daft. The rear wing is a bit much for a car that might need it. Without it, it's just plain dorky. My example was shod with Continental tires, which is fine except for the wheel covers on it.

Inside is where it hurts. The cabin is narrow for wide people. It just feels narrow between the doors and the center console. I found a somewhat comfortable driving position that recalls my experience with my long lost 1991 Acura Integra. That was 24 years ago when I last experienced that car…

The seats…ouch! That's the only word I can describe them. No comfort, but position it right, you have plenty of support. Support without comfort is not my cup of tea. Add the fact that my arms are almost straight when reaching the steering wheel and you have a vehicle that doesn’t suit me fine. Good thing it has XM satellite radio on board!

Here’s an interesting point: the Cobalt and the Saturn Astra share the same Delta architecture. So, why is it that the Saturn (er, Opel…they were built in Belgium!) feels more comfortable than the Chevrolet? Did the bowtie folks miss the concept from its European original? Now that there’s a new version where supposedly the entire GM global family is expected to be on board with the same design language, it’s a moot point at this stage where the two vehicles deviated into their current iterations.

I'll refrain from even bringing up the long-lost Saturn Ion, also based on GM's current Delta platform and, ironically, replaced by the Astra.

As for hedging against high gas prices, my previous experience with the 2.2-liter ECOTEC was fraught with fuel economy figures ranging from unacceptable to pretty darn good. This time around, my economy loop averaged 26.1 MPG. If you ask, this is what I expect an ECOTEC 2.2-liter motor with an automatic to average in the first place! Chevrolet has just introduced a Cobalt capable of a 5 MPG increase from its current 2.2-liter motor connected only to a 5-speed manual transmission. The XFE sounds like a smart idea, but how will it translate on the road in real conditions?

Granted this may not appeal to every hairdresser or salon receptionist, but one can have fun with the Cobalt coupe. Even the blokeist of guys would.

PRE-OWNED VEHICLE INFORMATION: Per a search on several car shopping sites, V&R found there were several 2008 Chevrolet Cobalts available between $2,900 and $7,000. Mileage and condition vary, but most were found with over 79,000 miles on the odometer, the highest being over 216,000 miles. Always have any vehicle inspected before purchase.